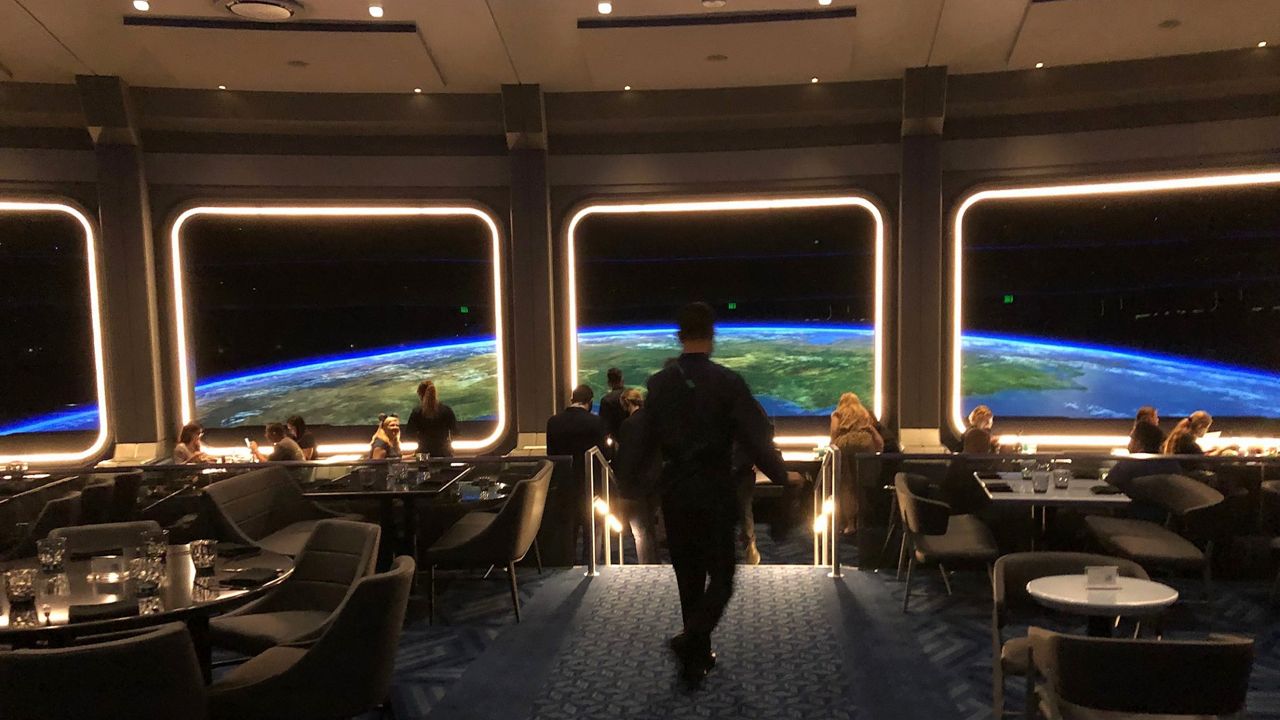 ORLANDO, Fla. – Space 220, the highly-anticipated space-themed restaurant at Epcot, officially opened to the public on Monday.


The new dining experience, located next to the park’s Mission: Space attraction, will simulate traveling 220 miles above Earth to a space station that will allow Disney World visitors a chance to dine among the stars.

It all begins on ground level, where visitors will check-in for their dining experience. The lobby features artwork that offer a preview of the views visitors will once the leave Earth.

After checking in, visitors are given boarding passes for one of the space elevator, known as stellarvators, which will take them up to the Centauri Space Station. Once inside the elevator, visitors can watch their journey from Earth to space from a window in the floor. First, they'll see Epcot and then the view widens to show Florida and then Earth. The space elevator will also be used on the trip back to Earth.

VIDEO: Here’s the Space 220 stellavator in action. It transports guests to the Centauri Space Station, where they’ll be dining. pic.twitter.com/21ioNXhA7x

When visitors leave the elevator, they’ll find themselves aboard the space station where artificial gravity keeps everyone from floating away. In the hallway leading to the dining room is the Grow Zone with rotating produce featured on the menu. They’ll then be guided to their table in the dining room, where several large windows offer panoramic views of space and Earth. Outside the windows, visitors might see other spacecraft or travelers go by.

To further add to the theming, atmospheric background music plays in the background.

And here are some of the entrees (Star Courses) at Space 220. #Epcot pic.twitter.com/UDBqmbOkHl

The restaurant also offers a kids menu for lunch and dinner at $29. And just for the kids, there are collectible Space 220 trading cards, which come with the purchase of a kids meal or non-alcoholic cocktail.

Space 220 comes from the Patina Restaurant Group, which operates several restaurants at Disney World, including The Edison and Maria & Enzo's Ristorante at Disney Springs.

Space 220 is only accepting walk-ins through Sept. 26. After that, it will start accepting reservations, which opened Monday morning, but were booked up to November within minutes.

The new restaurant comes amid a multi-year transformation at Epcot. As part of the project, the park is getting new attractions, stores and shows. The new Creations Shop as well as a reimagined Club Cool recently opened at the park. Remy’s Ratatouille Adventure at the France pavilion will debut Oct. 1 as will a new nighttime show called Harmonious on the World Showcase Lagoon.