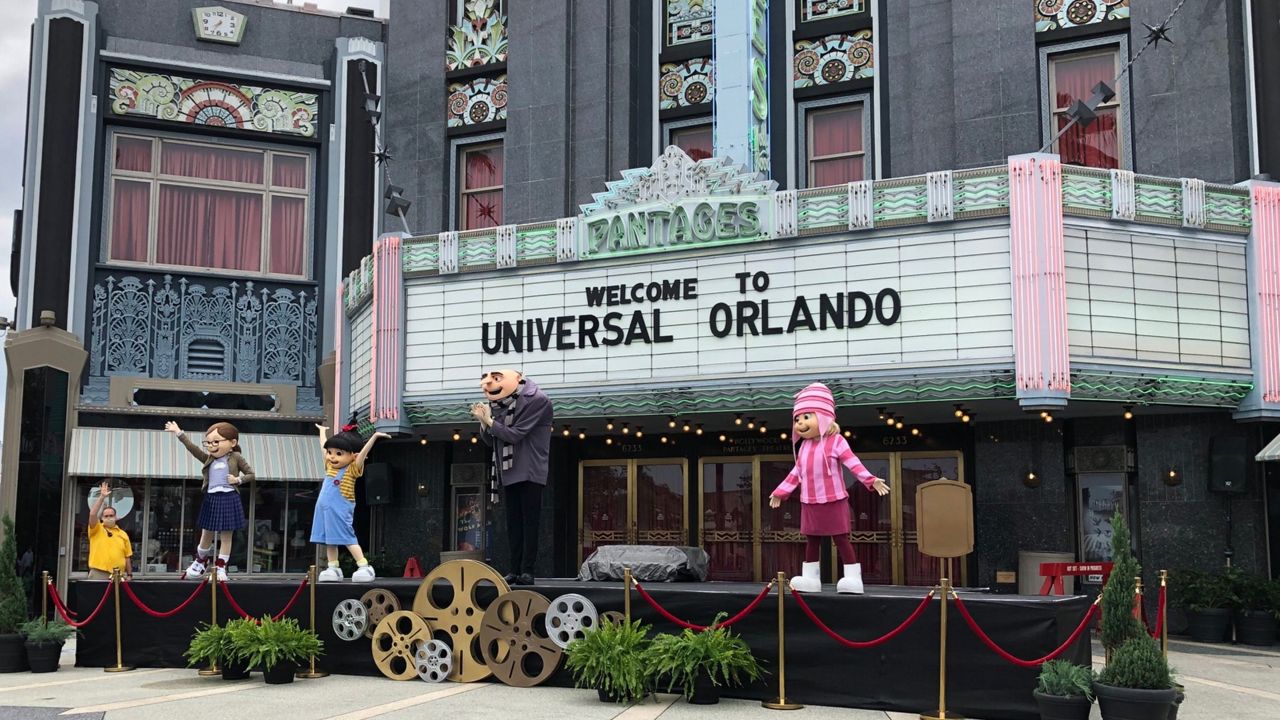 Despicable Me characters interacting (at a distance) with visitors at Universal Studios Florida, which officially reopened June 5. (Ashley Carter/Spectrum News)

Universal Orlando Reopens to the Public after Months-Long Closure

ORLANDO, Fla. – For the first time since mid-March, Universal Orlando’s theme parks are open to the public.


​​The coronavirus pandemic caused Universal to temporarily close Universal Studios Florida, Islands of Adventure and its Volcano Bay water park in order to prevent the spread of the virus.

On Friday, the coasters were up and running once again and visitors eager to spend some time in the parks were back. Although Universal said it would be limiting capacity at the parks, attractions and stores, crowds were light for the first day of reopening.

Universal has previously outlined several health and safety measures that would be in place when the parks reopened. Visitors are required to undergo temperature checks and wear a face mask to gain entry.

On Friday, temperature checks went quickly, with most visitors spending less than a minute in line. The lines to enter the parks were minimal even with ground markers keeping everyone at a distance.

The busiest areas of the parks were both sides of the Wizarding World of Harry Potter, with many try to ride Hagrid’s Magical Creatures Motorbike Adventure. The attraction, like many other attractions, is using Universal’s virtual line system. Visitors will need to obtain a virtual pass via the Universal Orlando mobile app in order to ride. As expected, the virtual passes went quickly, but Universal employees said more are added throughout the day.

Elsewhere, coasters and other rides were running with empty rows and empty seats as Universal spaced out groups to maintain social distancing. Riders are given hand sanitizer before they board and employees hand out 3D glasses at the attractions that use them.

Employees can be seen cleaning and wiping down high contact areas. Hand sanitizers dispensers have been placed in restaurants, outside attraction entrances and throughout the parks.

Passholders and hotel guests were among the first to experience the new measures at the parks. Universal held previews on Wednesday and Thursday, ahead of its official reopening.

While Universal Orlando becomes the first major theme park in Central Florida to reopen, others are getting ready to welcome back visitors. SeaWorld Orlando, Aquatica Orlando and Discovery Cove reopen to the public on June 11. Visitors will need to make a reservation in advance to visit the parks. Meanwhile, Disney World is reopening its parks in phases. Magic Kingdom and Disney’s Animal Kingdom will reopen on July 11 followed by Epcot and Disney’s Hollywood Studios on July 15.