Anaheim considers a 2% gate tax for tickets to Disneyland, Angels and Ducks

ANAHEIM, Calif. — Tickets to Disneyland and other major entertainment events in Anaheim could get more expensive.

The Anaheim City Council will discuss and vote Tuesday on whether to create a ballot in the November election that adds a 2% gate tax for tickets at Disneyland, Honda Center and Angel Stadium.

If a council supermajority passes the proposal, voters ultimately decide whether to add an admissions tax for tickets at the city's major entertainment and sporting venues.

City staff said the tax could generate an estimated $55 million to $82 million a year.

City officials said the money would go to the city's general fund and pay for street maintenance, community services, police and fire.

Council member Jose Moreno is pushing for the gate tax.

"We have an obligation to consider options to promote our fiscal health and provide essential services to our residents," said Moreno in an email to Spectrum News. "Given the tremendous needs for services in our city, I simply ask council colleagues to allow the people of Anaheim an opportunity to vote on a measure that can provide essential funding for our neighborhoods." 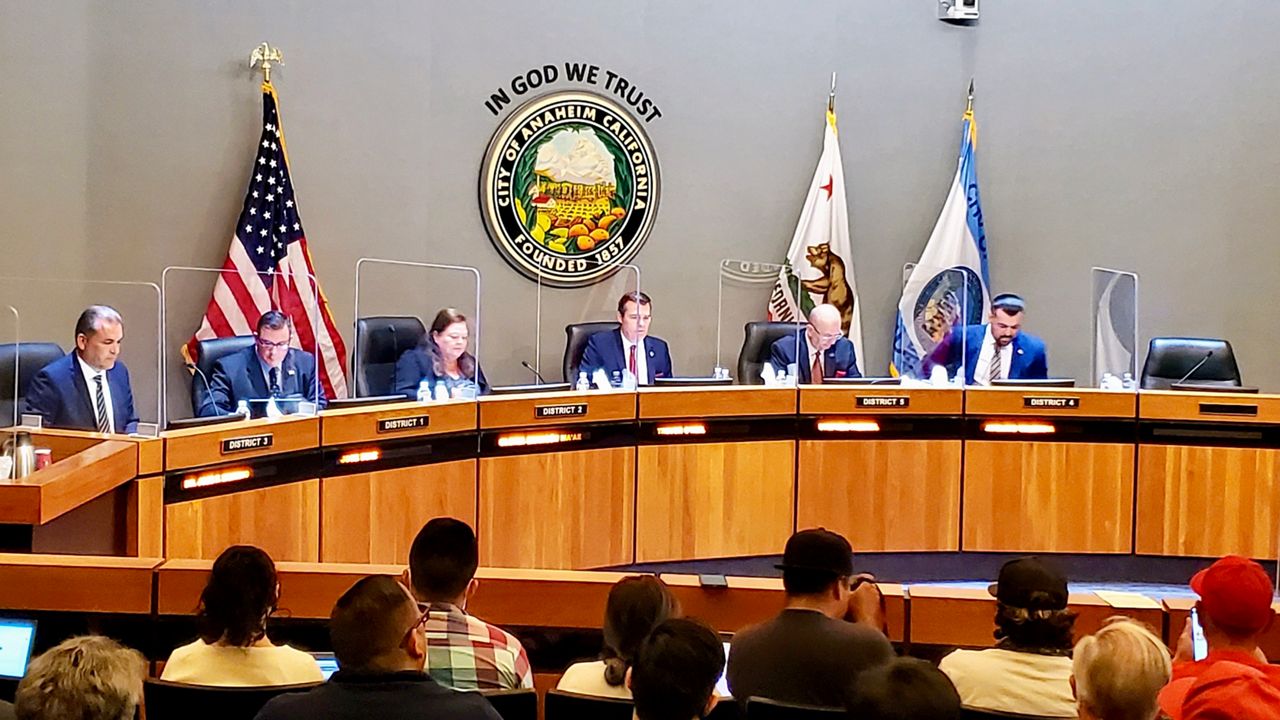 Moreno added that since the Great Recession of 2008, the city has not recovered from the staffing layoffs and the tightening of city resources and services.

The coronavirus pandemic, he said, exacerbated the city's dire financial situation. He said that currently the city does not have enough money to open libraries seven days a week, don't have enough resources for code enforcement and community policing, and insufficient senior services.

"That is why I am proposing a modest gate tax so that Anaheim residents could consider options to continue to provide the highly valued services that we all enjoy and love," he said. "People should have the choice to vote on a focused user fee at major venues – a gate tax that would be paid by people who visit the venues, mostly tourists."

The city and its major entertainment venues are no stranger to the gate tax issue.

The city in its history has never charged a gate tax despite having major visitor attractions such as Disneyland, Honda Center and Angel Stadium that bring in millions of visitors a year.

The city-owned convention center is not part of the admissions tax proposal.

In 2015, a year before their agreement with the city was set to expire, Disneyland officials lobbied hard to extend an entertainment tax exemption for 30 years.

The then-city council agreed to forego a tax in exchange for Disney to pour more than $1 billion in investment into the Disneyland Resort. That investment money led to the creation of Star Wars: Galaxy's Edge.

However, in 2018, Disney asked the city to terminate the agreement before voters decided on a ballot measure that would have required businesses that receive such tax incentives to pay their workers more than minimum wage. That measure passed in November 2018.

Now the gate tax resurfaces as the city tries to rebound from the coronavirus pandemic-catalyzed downturn that significantly impacted the city's tourism business. The city last year faced a $114 million budget deficit and had to borrow money to balance it.

Under the proposed ordinance, the city would impose a 2% admissions tax on attendees of events held at entertainment and sporting venues with a capacity of more than 15,000 attendees.

If the gate tax had been in effect in 2019, the city would have raked in at least $38 million from Disneyland visitors who paid for a one-day, one-park ticket.

Pre-pandemic in 2019, Disneyland tickets started at $104. The theme park brought in more than 18.6 million visitors, the Themed Entertainment Association reported.

The Ducks, owned by the Samueli family, which also manages the Honda Center, brought in nearly 16,000 visitors in 2019 and would have contributed $17,000 to the city coffers. The tax would also apply to concerts and other sporting events held at Honda Center.

Though the proposed tax would cover the Angels, which brings in 3 million visitors a year, any tax the city levies onto the team to pay would be reimbursed back to the team under their current lease agreement.

Disneyland and Honda Center officials did not return a request for comment.

The council needs a super majority of at least five of the six members to pass the proposal. If the proposal passes Tuesday, the ordinance would require a majority vote of 50% plus one in November to pass.

"This revenue could go to much needed services in Anaheim and back to Anaheim residents," said Moreno. "My ask of council colleagues is to recognize our fiscal needs, the social impacts of 25 million visitors to our city, and to support allowing the people of review, discuss and vote on the measure—Let the people of Anaheim decide."

EDITOR'S NOTE: The original story was updated to include comments from Council member Jose Moreno. (July 18, 2022)