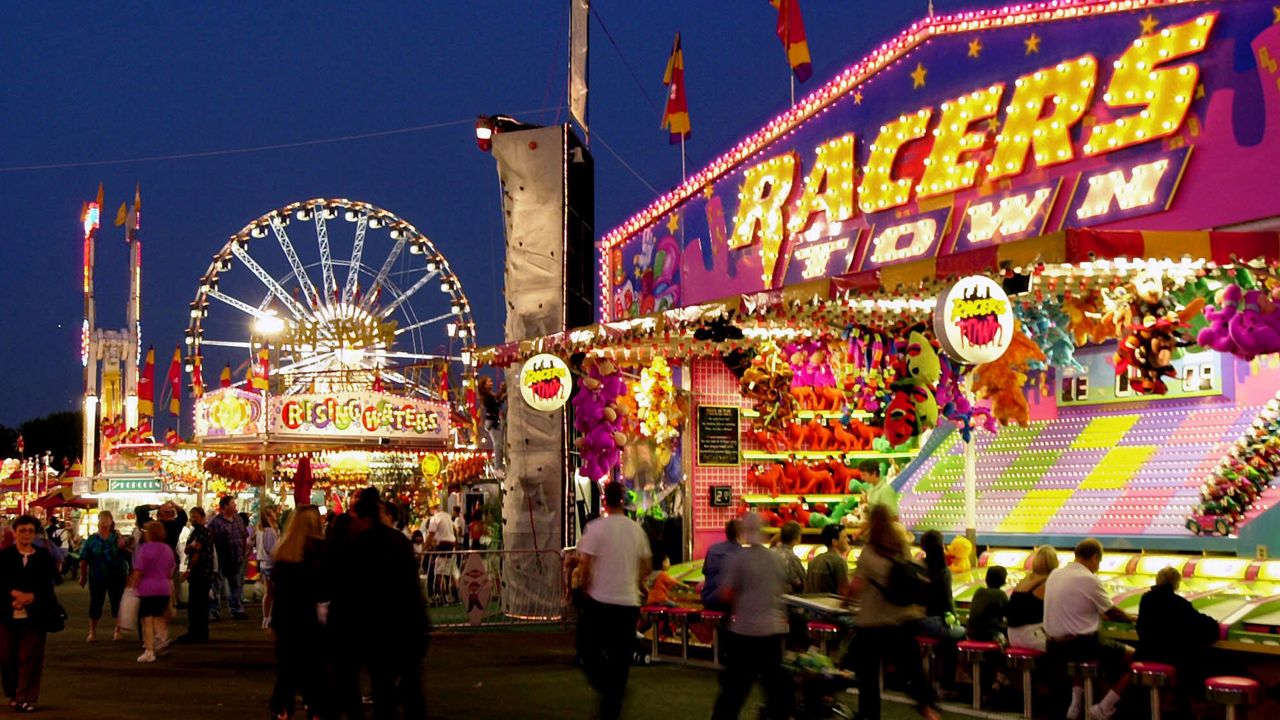 SANTA ANA, Calif. (CNS) — Tickets for the 2021 Orange County Fair sold out Saturday on its first weekend following a yearlong absence due to the COVID-19 pandemic.

The annual event features the return of many favorite attractions and a few notable differences. Most importantly, crowds aren't as large as previous years and hours are different as part of COVID-19 protocols.

"We don't want large crowds at the gate or long lines at the ticket booth," so fairgoers are being asked to buy their tickets online instead of at a ticket booth, said Michele Richards, CEO of the OC Fair.

But prices have not gone up and fairgoers won't have to pay a fee to buy tickets online, Richards said.

The fair is still being held at the OC Fair & Event Center in Costa Mesa. Hours are 10 a.m. to 11 p.m. Wednesdays and Thursdays and 10 a.m. to midnight Fridays, Saturdays and Sundays.

Attendance will be capped at about 75%, Richards said.

"We have a lot more tables, shaded seating for eating and drinking, so people can sit and relax and eat their food as opposed to walking around," Richards said.

"Every day will feel like a regular weekday, where it's easy to get around," Richards said.

Fairgoers will still be able to enjoy a wide variety of fried food options and other favorites, including the Alaskan racing pigs, but that last feature isn't popular with everyone.

A small group of animal rights activists protested outside the fair entrance Friday and Saturday, "to bring attention to the animal abuse that goes on behind the scenes and in plain sight," they said.

"We're here to tell people the OC Fair is teaching kids that violence is normal and OK," said David Santucci, one of the vegan protesters. "Every year, the Fair hosts the FFA, Future Farmers of America, a program in which high school students raise animals and then auction them off to slaughter. Many of these students are traumatized by the experience. They fall in love with that animal during his or her short life of six months, before they're sent off to have their throat slit at the slaughterhouse.

"In addition, the Fair hosts events like pig races, and a rodeo. These harmful events objectify animals and force them to endure terrifying violence and abuse for the sake of so-called entertainment. Animals are not ours to use however we want. They are not food, they are not clothing, they are not entertainment."

Terry Moore, communications director for the OC Fair, told City News Service that animals were an important element to the annual event.

"Animals are an important part of our agricultural heritage and the education programs at OC Fair & Event Center. They are also an integral part of the OC Fair and we value and respect all animals," Moore said.

Another noticeable difference at this year's fair is the concert schedule at the Pacific Amphitheatre. Country singer Brantley Gilbert will kick off the fair concert season, which will continue through Sept. 2.

The rockers are scheduled to hit the stage Aug. 25.

Other notable performers will be X, Los Lobos and the Blasters on Aug. 1; War and the Commodores on Aug. 5; Cheap Trick and Blue Oyster Cult on Aug. 11; Dwight Yoakam on Aug. 13; and the Flaming Lips on Aug. 26.

All carnival rides and livestock competitions are also returning.

"There will be plenty of blue ribbons awarded for fair competition for cakes, pies, quilts, photography and art work and always great shopping," Richards said. "And, of course, the carnival."

The fair will still be 23 days long, as usual, she said.

Richards was supposed to take over the fair as CEO last year, but the pandemic canceled that. So this will be her first year in charge.

"That's called bad timing," she said of the yearlong absence.

"How do you describe this feeling?" she asked. "It's like a big old flap of joy between two slices of happiness."

She compared the "joy to reconnect" with the community to quarantined relatives reuniting.

"It's been a tough challenge," Richards said of the past year as the fairgrounds hosted COVID-19 testing and then vaccinations while also serving as a food distribution point for needy families.

"But it was also my privilege to see the organization through the pandemic and try to bring back our events and now to be able to host the fair is just like the rainbow at the end," Richards said.