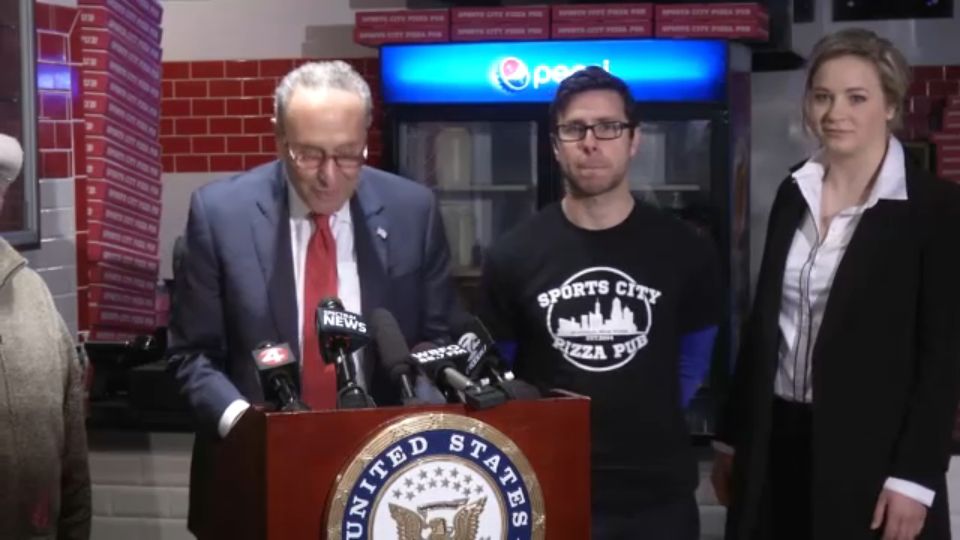 Schumer To Canada: Punitive and Anti-Fair Trade Dairy Policies Are Not Acceptable

U.S. Senator Charles E. Schumer today met with the new Canadian Consul General Phyllis Yaffe and Canadian Ambassador David McNaughton and strongly urged them to reverse the protectionist and restrictive trade policies that are currently threatening the Upstate NY milk industry. Schumer explained that Ontario has adopted restrictive measures on the importation of milk products that can be sent to Canada and these measures are on track to be expanded nationally, which impacts producers like O-AT-KA Milk in Genesee County, Cayuga Milk Schumer said these policies are blatant violations of existing fair trade agreements with Canada. Ingredients in Cayuga County and Ideal Dairy Farm in Washington County. Schumer said this is an affront to current U.S.-Canadian trade agreements, and therefore urged the new Consul General and Ambassador to reverse these unfair policies and work with the US to keep current dairy trade agreements strong. Canada has pushed back the implementation of their restrictive measures nation-wide, known as the national ingredient strategy, from November 1, 2016 to February 1, 2017, due to pressure from Schumer and others.

“Canada’s new restrictive dairy trade and pricing polices fly directly in the face of trade agreements signed by the U.S. and Canada and they are hurting New York producers who merely want to deal fairly with our Canadian partners. That’s why I met directly with both the new Canadian Consul General and the Canadian Ambassador and I urged them to end these unfair policies and work with the U.S. to keep both of our dairy industries strong,” said Senator Schumer. “These kinds of policies put New York’s dairy farmers in grave jeopardy – so I made it clear to them that punitive and anti-fair trade dairy policies are not acceptable. Our NY dairy producers work hard every day to provide for their families and export quality products to the world – and they deserve to know that everyone’s competing on a level playing field.”

Schumer has long fought to protect the Upstate NY dairy industry and milk producers across the state. In September, Schumer urged the U.S. Department of Agriculture’s (USDA) Secretary Vilsack and the U.S. Ambassador to Canada, Bruce Heyman, to continue to pressure Canada to end these unfair policies. Schumer said it is critical that the federal government protects the Upstate NY dairy industry, and that these protectionist trade policies should not be allowed to continually impair the value of fair trade provisions the U.S. previously secured under our prior trade agreements.

In March, Schumer visited O-AT-KA Milk, Cayuga Milk Ingredients and Ideal Farm as he urged the USDA and the U.S. Trade Representative (USTR), Michael Froman, to protect Upstate New York’s dairy sector from the then-proposed barriers to trade. Following that push, Schumer again urged these two federal agencies to ramp up all available resources to investigate new Canadian dairy trade policies that could hurt dairy farmers in Upstate NY. The Canadian province of Ontario has already imposed limitations on American imports and recently Canada’s national government put out a proposal to expand these restrictions nationwide.

Schumer said Ontario recently implemented a targeted pricing policy, which is designed to crowd out New York’s dairy sales and discourage Canadian cheesemakers from using imported ultra-filtered milk from the U.S. in their products. This new pricing policy essentially sets the price of Canada’s products below that of New York’s ultra-filtered milk imports, which hurts O-AT-KA and Cayuga’s more efficiently produced ultra-filtered milk. Schumer explained that Canada recently proposed a National Ingredients Strategy for dairy, which reportedly takes a similar approach to Ontario’s new Class VI pricing policy by incentivizing Canadian processors to shift away from using dairy imports from the U.S.  Upstate New York producers have invested millions in order to be able to export to Canada because they have long enjoyed duty-free access for this specific product under the North American Free Trade Agreement (NAFTA).

Schumer said these Canadian trade barriers have already started to hinder development and growth of the Upstate NY dairy industry. Companies like O-AT-KA and Cayuga Milk Ingredients, along with Ideal Dairy Farm, rely on trade with Canada for a significant percentage – millions of dollars – of their revenue. As the country’s third largest milk producing state, a significant impact on New York’s ability to tap into key foreign markets could also impact farmers in surrounding states. Therefore, Schumer said, any reductions in export sales could impact NY dairy manufacturers and their supplying farms, which are already struggling with depressed milk prices.