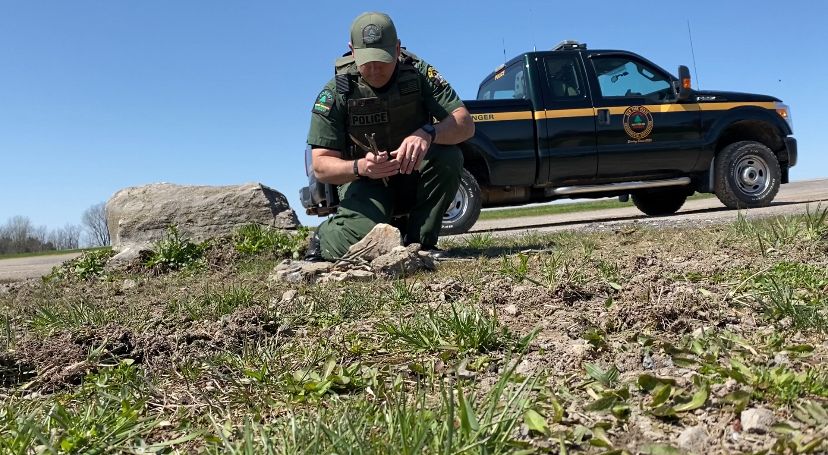 John Kennedy has been a New York state Department of Environmental Conservation forest ranger for over 22 years.

"Ninety-five perfect of wildland fires are created by humans, by people," he said. "Five percent is like lightning strikes, doesn’t happen that often here."

There’s a burn ban in New York state, which started March 16 and ends May 14. It requires people to not burn debris.

"Debris burning is burning like in the spring time, a lot of people want to pick up their branches, leaves, other dead material and clean up their backyards. Understandable, but you shouldn’t be doing that during the burn ban," Kennedy said.

Kennedy said that’s because those dried fuels, along with low humidity and high winds, can get those fires going. He recalls how one man in Erie County was burning debris during drought conditions and a burn ban.

"A spot fire came, hit all the dead grass. He was inside for what he said was a short period of time, looked out his back picture window and half his backyard was on fire. Long story short — five, 10, 15-acre fire started on the adjacent farmers field," he said.

Kennedy said you can have a campfire, but there are some regulations. It can’t be any wider than 4 feet or taller than 3 feet. You also can’t burn plastics or pressure treated wood. You also should have a buffer like a fire pit.

"What you want to make sure is, if you have a fire pit, you kind of clear out the area, about 3 feet of buffer. So that way, today, we’re not going to have any type of fire or anything like that, but let’s say this was lit. And there was an ember. If an ember shot out anywhere around this buffer zone, buffer area there, it’s not going to spread," Kennedy said.

Kennedy said you cannot leave a fire unattended for any reason. He also recommends having a source of water or shovel close by.

"If you get a spot fire that maybe lands out over here, you can just take the back end of your shovel, hit it a couple of times, knock it out. Maybe take some dirt, mix it in with some water. And that’ll be the end of that spot fire," Kennedy said.

If you have a fire that becomes bigger than a spot fire, call 911.

You can check the DEC website to see daily updates about what the fire danger level is statewide.