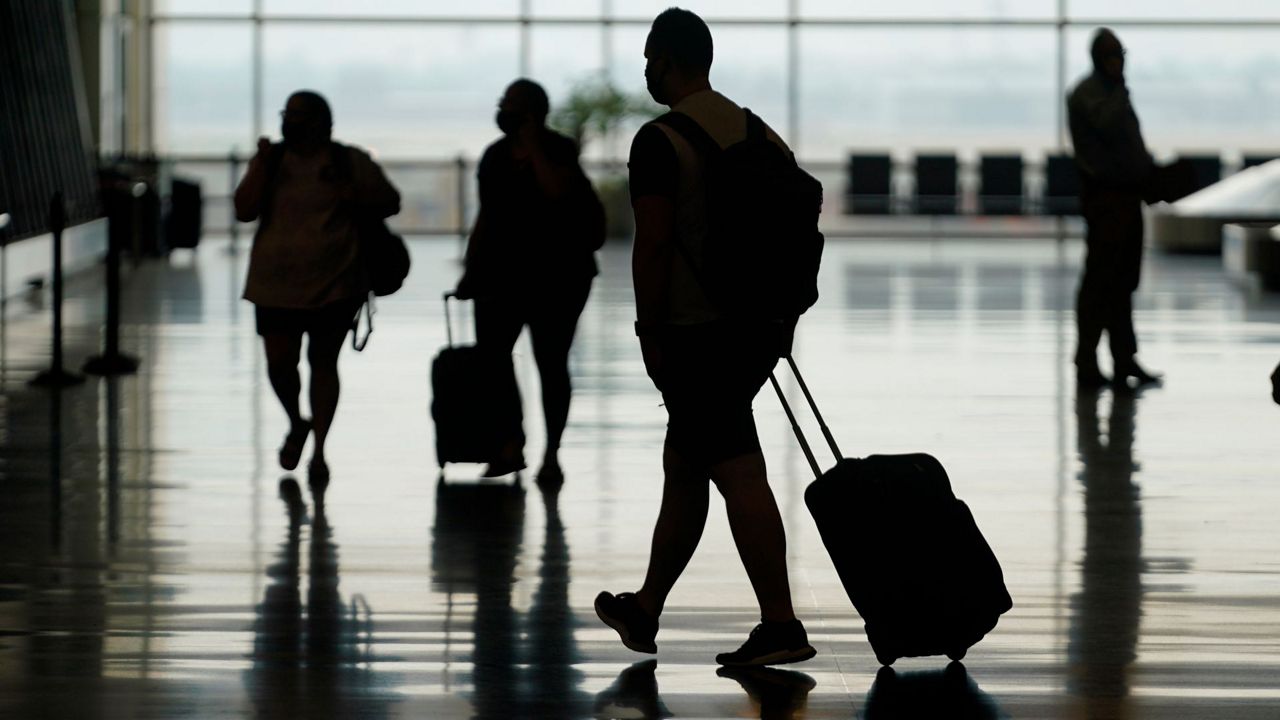 FILE - Travelers move through Salt Lake City International Airport Tuesday, Aug. 17, 2021, in Salt Lake City. The U.S. says that it's inviting the global community to visit now that the government has ended the ban on travelers from 33 countries. In reality, however, it will still be difficult — if not impossible — for much of the globe to enter the country and experts say it will take years for travel to fully recover. (AP Photo/Rick Bowmer, file)

Despite reopening, the US is still closed to many in world

NEW YORK (AP) — The U.S. says that it's inviting the global community to visit now that the government has ended the ban on travelers from 33 countries.

In reality, however, it will still be difficult — if not impossible — for much of the globe to enter the country and experts say it will take years for travel to fully recover.

For starters, half the world isn't vaccinated and therefore doesn't meet the U.S. requirement for visiting foreigners. So while many Europeans may now be able to come in, people from poorer countries where vaccines are scarce remain cut off, with limited exceptions.

For some public health experts, that raises ethical questions about the policy.

“The concern is not limiting access based on vaccination status,” said Nancy Kass, deputy director of public health in the Berman Institute of Bioethics at Johns Hopkins University. “It is that it’s systemically making it impossible for people, generally from poor countries, whose governments have been unable to secure anything near the supply they need, to be able to come and see their loved ones.”

Even if you've gotten the jab, that might not be good enough. Non-immigrant adults need to have received vaccines authorized by the Food and Drug Administration or which received an emergency use listing from the World Health Organization, otherwise they, too, are prohibited from entering the U.S. That sidelines anyone who's received Russia's Sputnik V or the China-produced CanSino jab.

Then there are the months-long delays in some places to get a visa. The U.S. Travel Association says that, on average, there’s a six-month visitor visa appointment backlog as many U.S. consulates and embassies have yet to resume normal operations. Meanwhile, other countries have their own strict rules, which complicates foreign travel.

Experts do expect a wave of travelers at U.S. airports, which will go a long way to boost the overall industry. The 28 European countries that up until Monday were barred under the U.S. policy made up 37% of overseas visitors in 2019, the U.S. Travel Association says.

Travelport, which analyzes airline bookings data, says that by region, the greatest number of international travelers to the U.S. since mid-2020 has come from Latin America, but new travelers booking flights since late September, when the Biden administration said it would end the travel bans, are mainly European. The reopening of the land borders with Canada and Mexico should also help restore travel, since they are typically the top two sources of international visitors to the U.S.

But the U.S. Travel Association predicted in June that international travel would not return to 2019 levels of nearly 80 million visitors until 2024. Foreign travelers dropped to 19 million in 2020 and is expected to rise a bit this year, to more than 26 million; it will more than double, to about 57 million, in 2022 but still fall far short of its pre-pandemic heights.

The U.S. isn’t alone in trying to jump-start travel as more people get vaccinated. Some countries that closed their borders have begun easing back, like Australia, India and Thailand; Europe opened its doors to Americans months ago.

Others, like China and Japan, remain essentially closed, which makes it difficult for their own citizens to leave and come back because of mandatory quarantines. In 2019, the two countries were among the top five biggest sources of overseas visitors to the U.S., along with the U.K., South Korea and Brazil, according to U.S. government data.

Sylvia Li, who is from China and lives in the U.S., just married her partner in a small ceremony in New York a few weeks ago without her family there because she had no idea when they’d be able to come or when she’d be able to go to China.

“I was able to convince them, it’s really nothing, it’s just a party,” Li said. But her mom didn’t fall for it. “I think my mom felt she was missing out. She felt like she was actually missing something big.”

Edgar Orozco, who owns two restaurants, both called Chelito's, in El Paso, Texas, was excited for the land border with Mexico to reopen on Monday, and he hopes that helps fill the streets of downtown El Paso with shoppers — and customers at his restaurants — this holiday season, unlike last year, when he said streets were empty.

“Now that non-essential travelers are going to be able to come back, we're looking forward to going back to those good old days,” he said.

But he's heard of people who have visa issues, like a vendor in Mexico who he says can't renew his visa until 2023. The appointment wait time for a U.S. visitor visa in Cuidad Juarez, just across the border from El Paso, is 676 days, or nearly two years, according to the State Department.

In New York, the country’s biggest tourist destination, businesses are gearing up for more international travelers. Hudson Yards, a shopping complex, is expanding its concierge services to include a wider array of foreign languages. City Experiences, a tour company that sends ferries to the Statue of Liberty and other sites, is increasing marketing abroad.

In the past two weeks, 75% of new bookings at three Moxy hotels in Manhattan have come from Europe, mostly the United Kingdom, Spain, France and Germany, said Mitchell Hochberg, president of the hotels’ operator, Lightstone.

Still, Hochberg thinks it will take until at least spring for international bookings to be back to their pre-pandemic levels.

“Travel can be cumbersome," he said. “The flights are somewhat limited right now.”

Worry about getting COVID-19 also continues to put a damper on travel plans for many, even if they're now allowed in.

Mehek Khera doesn't want her parents in India to visit her in Santa Clara, California, even though they could now — they're vaccinated and have visas. But the risk of getting sick is too high. Her father has a heart condition, and they don't have health insurance in the U.S.

“We don't feel comfortable adding on another risk on top of that," Khera said. “They don't feel very excited to travel.”