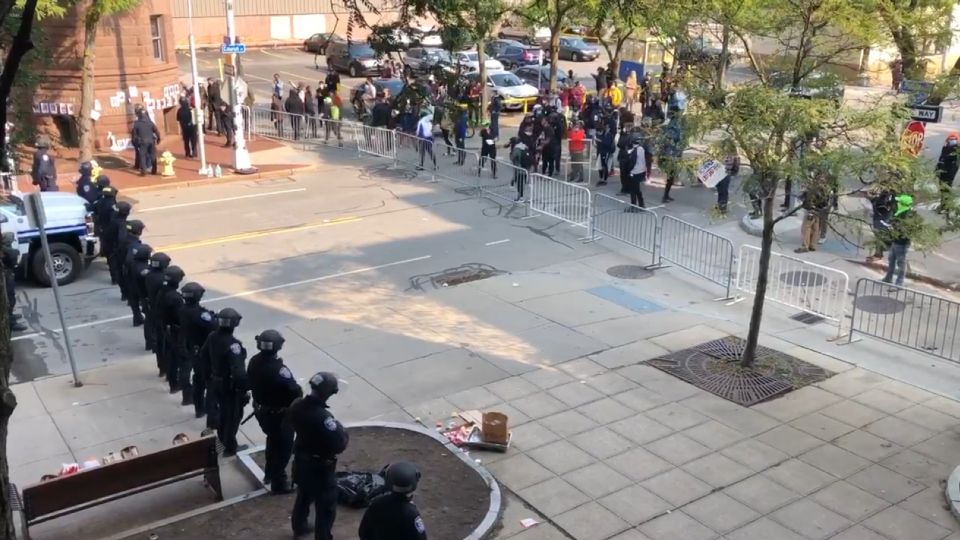 Members of the Rochester Police Department have removed the group of protesters occupying the steps of city hall and the street in front of it.

The officers formed a line and began advancing on the crowd around 8:30 a.m. Wednesday.

Police began taking down tents and telling protesters to vacate the street and sidewalks or be arrested. Some were taken into custody. Others left the area, but many of the activists remained.

The demonstrators were ultimately pushed back by by police and barriers were set up around city hall. The tents and other belongings were collected by a garbage truck and were taken to Spiritus Christi Church nearby where they can be collected.

Police have now put up barricades on Church St. in front of City Hall, and have moved back. It’s quiet now. ⁦@SPECNewsROC⁩ pic.twitter.com/q4iMZCBdcB

Garbage men are picking up protester’s stuff and putting it on their trucks. I’ve been told by protesters that the stuff will be taken to Spiritus Christi Church down the street @SPECNewsROC pic.twitter.com/7gRKDaWiH1

A cleaning crew arrived and began taking down fliers posted at the entrance of the building and removed handprints that were applied in red paint. The BLM and Pride flags that were put up on Tuesday were also removed from the city hall flag poles. The American flag and New York State flag were put back up.

Eventually all the demonstrators were dispersed on Wednesday. They had been blocking the entrance to city hall, preventing employees from getting inside.

They had planned to stay until their demands were met, which included the resignation of Mayor Lovely Warren and the arrests of the officers involved in taking Daniel Prude into custody.

The #BLM flag was just taken down from the pole outside city hall. Yesterday, protestors took down the American flag and replaced it. A Black Lives Matter flag was then placed on another pole, under the city of #ROC flag. pic.twitter.com/syi1Whxww1

Crowd has dispersed. Officers have left. City workers are cleaning off the building and street @SPECNewsROC pic.twitter.com/cnCRkChU6F

This marks the 15th day of protests in response to the death of Daniel Prude.