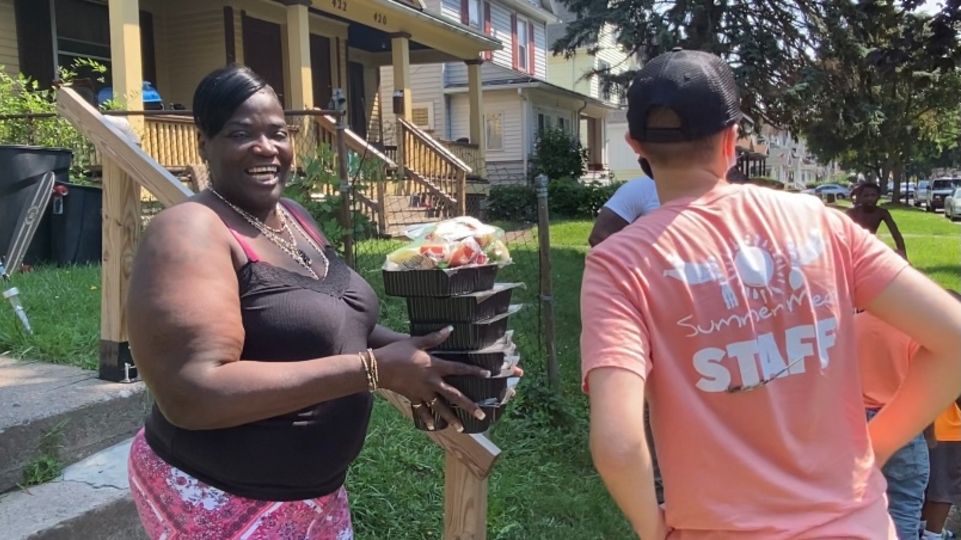 ROCHESTER, N.Y. — When the pandemic made it hard for families to get summer meals at pick-up locations in the city last summer, Foodlink started a partnership with RTS to deliver that food. It continued this summer and is something Foodlink, RTS and the community see as a positive change out of the pandemic with the hopes to have it continue in the future.

Cassandra Robinson called for all the kids in the neighborhood to come out and get their summer meals when Foodlink volunteers pull up on Magnolia Street in the RTS bus in the afternoon. Watching all her grandkids during the day, Robinson said when the bus first pulled up after school ended it was like a godsend.

“They was like ‘Grandma the lunch truck!’” said Robinson. “I said go ahead because I was up here and they were down there playing. He pulled over and just started serving. I said sure! And that particular day I had a lot of grandkids that day so it was good.”

She said before the bus came to them she would pick up the kids’ summer meals at School No. 19, which was difficult to do sometimes when watching so many kids at a time. Now she can make sure they all get a balanced meal.

“They were getting them good lunches in school and when they’re home they eat different," said Robinson. "But I like when the truck come and give them the vegetable, the meat, the milk and everything. So it helps for when I cook dinner.”

Joshua Wilcox, manager of strategic initiatives at Foodlink, called this an “ice cream truck” style of getting food that only the pandemic allowed them to do. In the past, government regulations required children to eat meals on site at Summer Meals locations.

“Moving forward we definitely want to be able to keep this style of delivery post COVID because it’s successful,” said Wilcox. “It breaks down the barriers some folks may have in walking from their address to a grab-and-go site that’s like a mile or mile and a half away.”

Last year, this model alone served 1,000 meals a day to families. This summer, with the pandemic easing and more in-person activities allowed, they’ve scaled back to 400 meals delivered a day. However, even in an almost post-pandemic world, Wilcox said it has proven necessary.

“The need is still there because there are many children that aren’t in summer camps. There's many children, their parents don’t trust them to go to Rec Centers and things like that,” said Wilcox.

Robinson said making sure the kids get one free meal a day adds up to be a big help.

“With this coming, I’m above water," Robinson said. "I’m right where I need to be with everybody eating properly and everything and having meals on our table.”

And that makes it even better than the ice cream truck.

“The ice cream truck costs me like $20. This is better, this is free guys,” said Robinson.

RTS CEO Bill Carpenter gave a statement saying this service with Foodlink is part of its mission to partner with the community.

“Fortunately, we have the capacity this summer to once again partner with Foodlink on a program that will provide families with fresh food and help our community recover,” said Carpenter.

A map of Summer Meals program pick-up locations and mobile services can be found here.