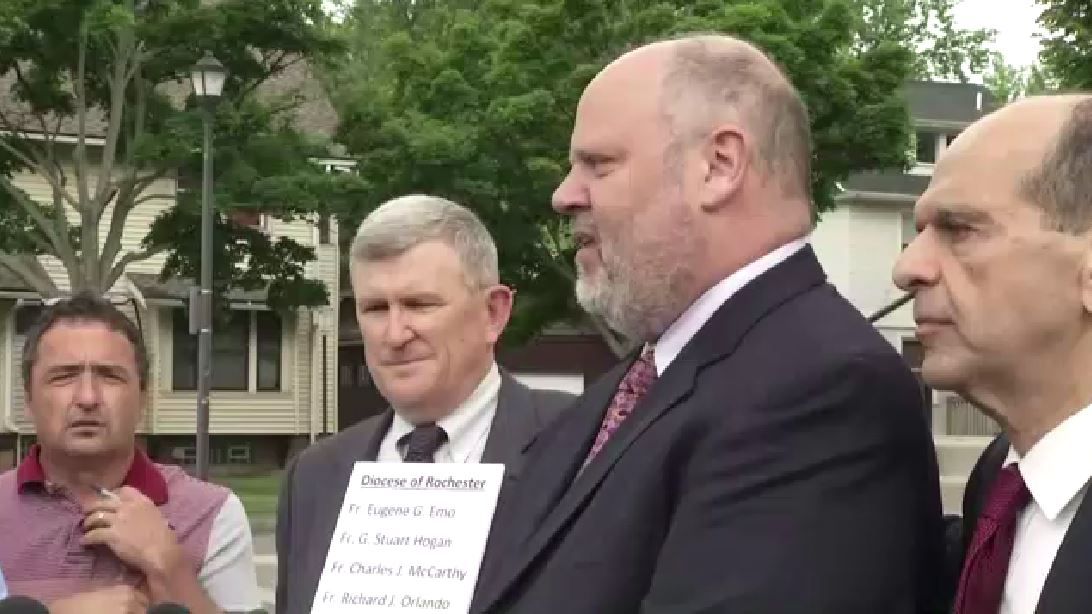 The attorney representing alleged victims of sexual abuse at the hands of priests who serve or once served in the Catholic Diocese of Rochester named eight priests Wednesday he says abused young victims over the course of 28 years, between 1950 and 1978.

The list of those accused includes the names of five priests never linked to sexual abuse before.

Boston-based Attorney Mitchell Garabedian is representing 17 clients who say they were abused by the priests. The alleged victims ranged in age from five to 18 at the time of the abuse and are now in their 50s, 60s and 70s.

Three of the priests accused of abuse have been named previously: Father Eugene Emo, Father David Simon and Father Francis Vogt. Garabedian named five priests who had never before been accused of abuse.

The names of 8 priests of the Rochester Archdiocese are being accused of sexual abuse. A press conference exposing the allegations will take place shortly ⁦@SPECNewsROC⁩ pic.twitter.com/KG4fZ6yJ0J

Garabedian says all the priests named contributed to the sexual abuse and cover-up, which he says goes well beyond these eight men.

Garabedian is calling on Bishop Salvatore Matano “to reveal what records he has in his possession...what he has for knowledge, what he has in those secret files,  in terms of what priests are sexual abusers and he should identify them. And what supervisors allowed the sexual abuse to occur. The question always remains – and it’s a valid question: How far up the chain of command did the sexual abuse go?”

In a statement provided Wednesday afternoon, the Diocese of Rochester says it has been in communication with Garabedian's law firm for "several months" about these accusations. "The Diocese has invited participation in a process of investigation and resolution. We have had little or no response."

The statement goes on to say that Frs. Emo, Simon and Vogt were listed on the diocese's website since 2012  that identifies priests removed from ministry due to accusations of abuse.

"The diocese never received any complaints of clergy sexual abuse of a minor against Fathers G. Stuart Hogan, Charles McCarthy and Richard Orlando, each of whom retired as a priest and are now deceased," the statement says. The accusation against Fr. Valenti was investigated and "determined to be unsubstantiated. No further complaints of sexual abuse of a minor against Father Valenti have ever been received."

Retired New York State Supreme Court Judge Robert J. Lunn has been retained by the diocese regarding these claims.

Garabedian, who fought priest abuse in Boston in the early 2000s, also is working with victims in Buffalo, urging the diocese there to release the names of all priests accused of abuse.

“Even though you feel like your soul has been murdered you are not alone,” -sexual abuse survivor pic.twitter.com/z2N7gz022y

The diocese also provided a list of steps it has taken in the past few years to ensure a safe environment for parishioners, including establishing a diocesan Office of Safe Environment Education and Compliance and a newsletter for employees to share safety information. The Roman Catholic Diocese of Rochester has a victim assistance coordinator to assist those who need help. Victims  can call 1-800-388-7177 or email victimsassistance@dor.org