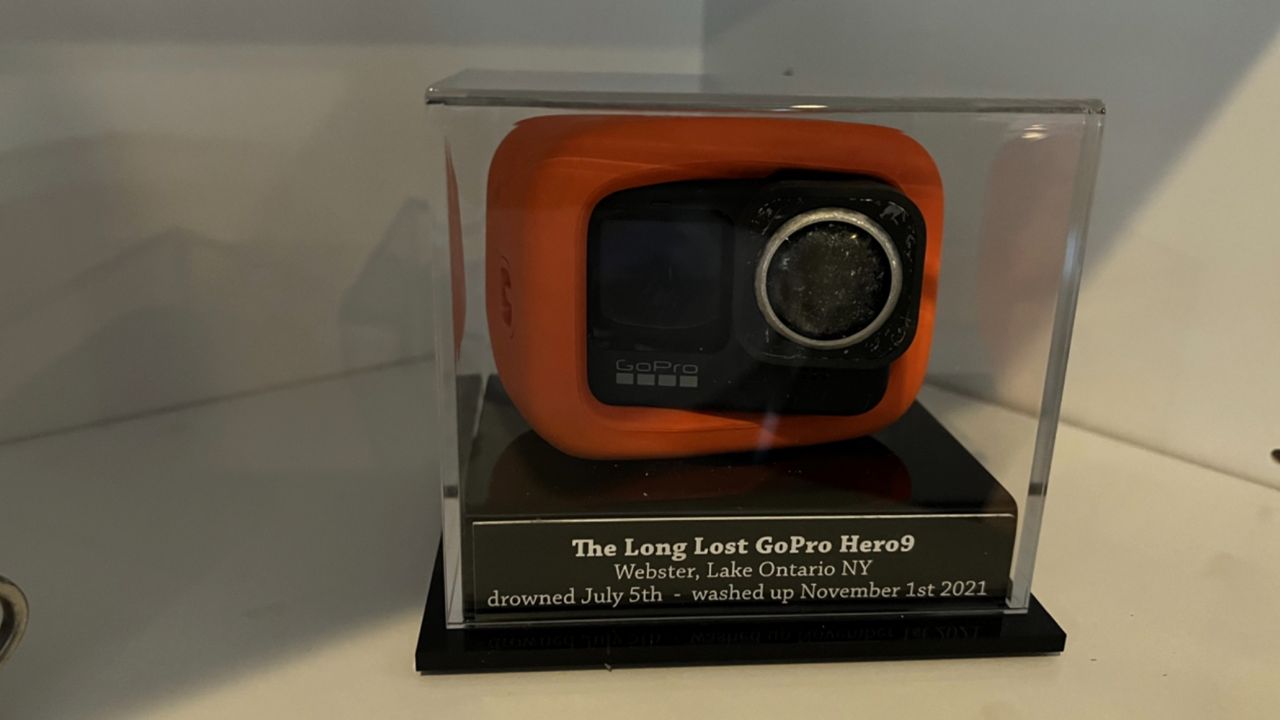 WEBSTER, N.Y. — A single lost GoPro in Lake Ontario created a chain of events that not only highlights the power of social media, but the community.

For the Fourth of July, Ollie Bartholomew of Westchester and his family were visiting relatives in Webster when he lost his GoPro in Lake Ontario during a jet ski escapade.

“I knew, as I put it there, ah this doesn’t feel too sturdy, I hope it doesn’t snap off,” Bartholomew said. “And within about a minute or two, it sort of pinged off when I went off a big wave and turned."

After an unsuccessful search, Ollie wrote it off as lost. It was a big disappointment for his family.

“Knowing there was a lot of footage and nice memories basically down there in the drink, I was not in the good books for quite some time,” Bartholomew said.

But it wasn’t lost forever thanks to D.P. Dunn of Webster.

Four months later, D.P. found it washed up alongside the shore at Webster Park, a spot he regularly enjoys visiting.

“I was up on the pathway there and then looking over into the debris field here,” Dunn said. “It just kind of caught my eye. Figured, well, that’s an interesting-looking fluorescent orange rectangle. I wonder what this is all about?”

D.P. enjoys a good mystery and took to social media after downloading a few of the pictures.

“I figured, well, let’s run it to ground," Dunn said. "And hey, if no one claimed it, then fair is fair. But at least let’s do some due diligence and make a good effort to find the owner."

He enlisted the help of Missy Rosenberry, who runs a community blog called 'Webster on the Web.'

“It really is a wonderful thing to know what I’m writing, that my blog is making a difference in people’s lives,” Rosenberry said. “And that is pretty much the main motivator for me today.”

She made a simple post about the GoPro and the power of social media worked fast. In less than three hours, Ollie was identified and communicating with Missy. D.P. was then able to send the GoPro home.

“It does sort of renew your faith in humanity, and kindness. And stories like this will warm your heart,” Bartholomew said.

But the story doesn’t end there. Ollie was so moved, he asked D.P. and Missy if there was a charity he could donate to in their name.

“I thought, how could I repay my debt to humanity and balance the karma?” Bartholomew said.

D.P. thought of his friend Kevin, who is battling A.L.S. and fighting to keep his home. So Ollie donated $200, with Missy jumping on board with her share too.

“It’s the right thing to do, and furthermore, it’s the power of friendship and community and teamwork,” Dunn said. “It’s an extension of what’s already in process.”

And after Missy posted about this on her blog post, the donations for Kevin continued coming in — kindness which has spread from a single found GoPro.

“This simple thoughtfulness Don had was like throwing a pebble in a pool of kindness. And the ripples of that kindness continue to spread out,” Rosenberry said. “And as far as I can tell, they will continue to do so as social media shares this story farther and farther.”