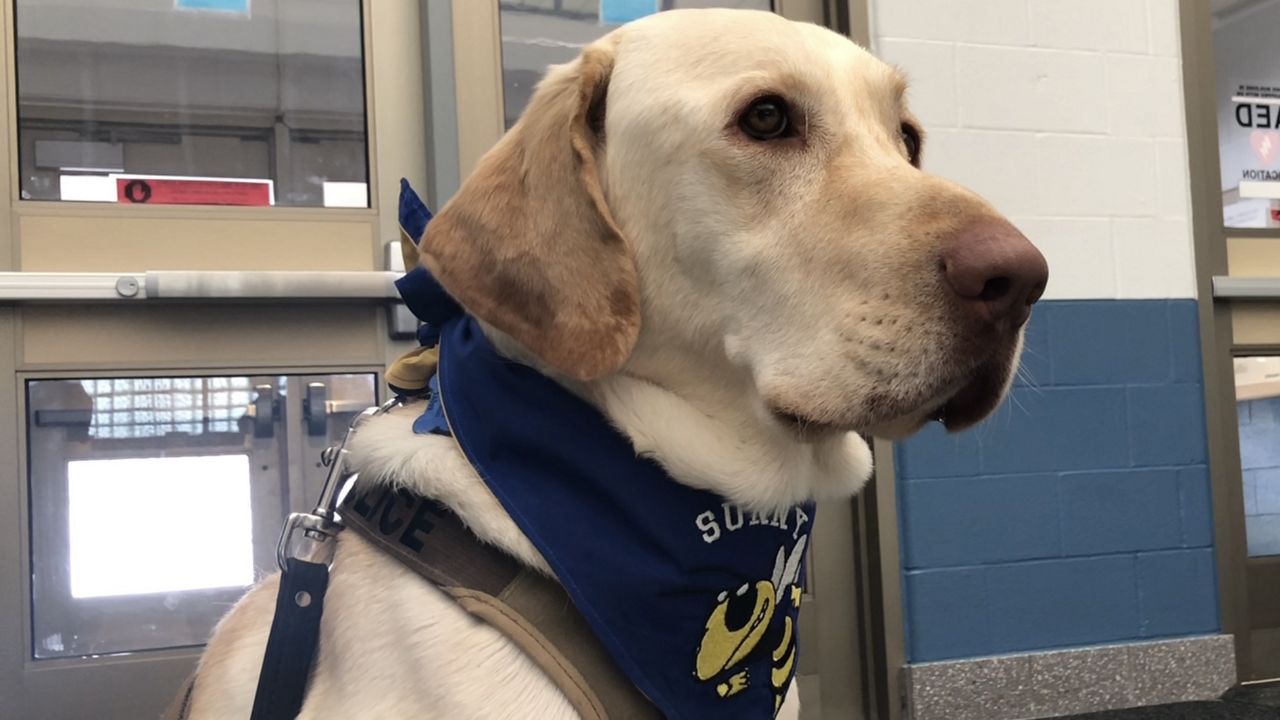 PERRY, N.Y. — When kids in the Perry School District arrive at school, they are greeted by the Perry Police Department’s newest four legged officer.

He started his new assignment at the Perry Central School District in January with Officer Matt Masci.

His job as a police therapy dog is simple: be there for the kids.

K9 Sunny got his therapy dog certification at the Paws and Stripes College in Brevard County, Florida.

Masci wanted to bring Sunny in because he saw the effectiveness of the police therapy dog program in Erie County, especially during the pandemic.

"The pre-K room is a spot I like to stop in all of the time. They are still figuring out what the school day is and that routine in the morning, and all of them have really tough days. He’s developed a relationship with a couple of those kids in there that routinely have bad mornings. So it’s really awesome to start off their day with coloring pictures of him because he’s already become a pet to them at school," said Masci.

Perry Police Chief Michael Grover and Principal Maura Gilsinan also noticed how Sunny has made a difference with his first month at the school.

"He’s gone into classrooms where kids are acting out or certain individuals are acting out. They see the dog. They immediately defuse and start playing with the dog," said Chief Grover.

"He’s a calming force for us during this time. There’s a lot of new things that are happening for our students, as well as our staff members, and it’s always nice to have someone reliable like Sunny," added Gilsinan.

While waiting for his next assignment, Sunny got a little time to enjoy the snow.

"He does love the snow for 10 minutes and then he’s had enough. It’s the Florida dog still in him," said Masci.

"Whenever anyone sees him, they all smile and he brightens everyone’s day. He’s always a good boy and he just makes everyone happy whenever anyone is around him," said Paige Roberts, a Perry Elementary School student.

After a long day, Sunny and Masci make one last stop.

"This is really Sunny’s office. I just work here sometimes. When’s napping, everyone comes and visits. I usually just get my busy work done and he’s usually the celebrity in this part of the building," said Masci.

Masci says he hopes to expand K9 Sunny’s role one day to have him also assist with search and rescue missions but for now this therapy dog is tuckered out.