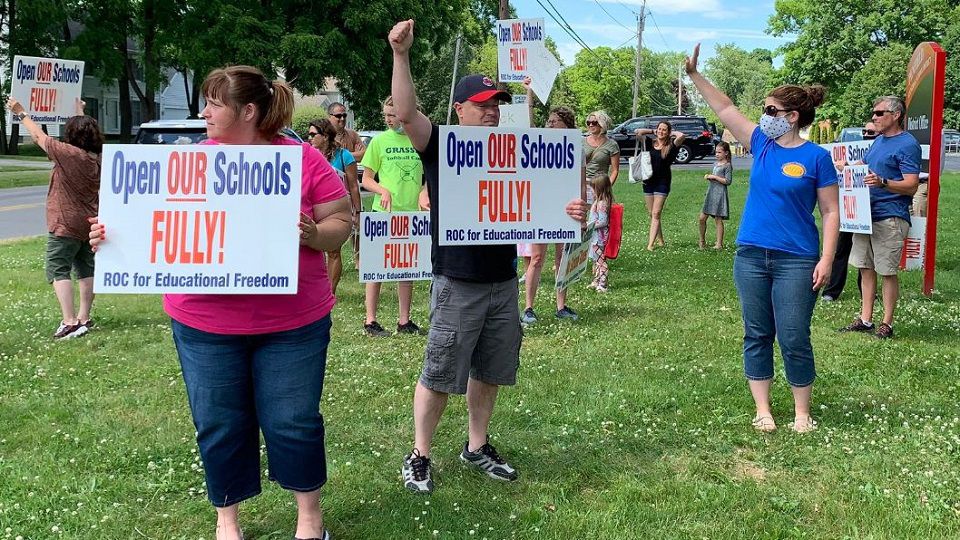 Some parents in Monroe County rallied for answers and for schools to open fully in the fall.

Chants of “No New Normal, No New Normal!” echoed outside the Penfield Central School District Thursday as a group of local parents demanded to be included in decisions being made about the coming school year.

Dozens rally in Penfield to “Open our schools fully!” and to have a seat at the table in deciding how schools open in the fall. @SPECNewsROC pic.twitter.com/Bb7zOEWs3T

Miesner joined a rally of like-minded parents in the hopes that kids like his daughter can have a normal life in school.

“I’m just out here fighting for her right to go, I just believe based on a lot of the data out there that we have that choice, the right to make that choice if we want out children to go to school,” said Miesner.

While some parents are concerned about the pandemic and their kids becoming sick — Meisner says his worries about his family aren't based on COVID-19.

Miesner said “I’m concerned with their socialization, their education, I’m also concerned you know with people that are affected by this, but I don’t believe we have to shut down schools, to make sure these people are protected.”

Christina Higley, creator of ROC for Educational Freedom said, “they’re telling us that we can’t handle making the right choices for our own families and our own children? No thank you!”

Words from Christina Higley with ROC for Education Freedom. pic.twitter.com/YhgvPPsH9l

Penfield Superintendent and head of the Monroe County Council of School Superintendents, Dr. Thomas Putnam, says he and the leaders of other local schools understand some of the frustration from parents.

"Parents are a critical stakeholder in all that we do and this would be no different. We obviously want to hear their voice and work with parents as we work towards September. The frustration for us and here in Penfield is that we have no formal guidance from the state and what requirements will need to be in place for September," said Dr. Putnam.

Some of the parents we spoke to at the Roc for Educational Freedom Rally say if schools are closed, they will likely homeschool, or even move out of state so their child can have a classroom education.