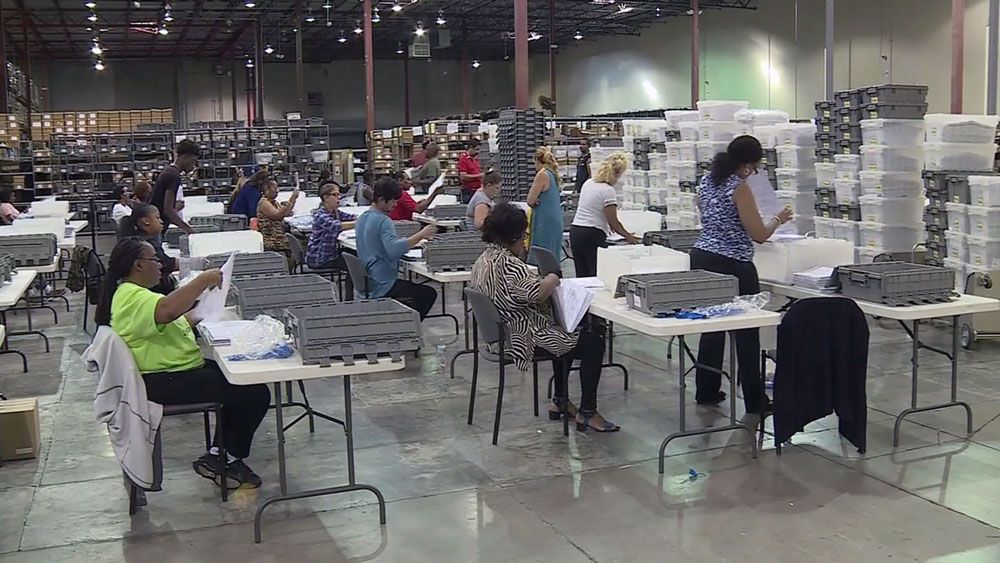 Poll workers in Broward County count ballots. A judge ordered the county to release certain absentee ballots to the canvassing board by 7 p.m. Friday. (Spectrum News)

The Rick Scott campaign says West Palm Beach Circuit Court Judge Krista Marx ruled Friday that Palm Beach County's supervisor of elections must submit so-called overvoted and undervoted absentee ballots to the Palm Beach County Canvassing Board for an open and public review of each vote before they are counted.

But on Friday night, the supervisor of elections asked for an emergency reconsideration hearing, saying it would not be possible to meet the court-ordered deadline.

The ruling is part of a lawsuit filed by Republicans against Palm Beach County and Broward County, accusing the two elections supervisors there of not being transparent with regards to votes still being counted. The party is also accusing Democrats of voter fraud.

The Scott campaign is accusing the supervisors of elections of engaging in possible voter fraud with "unethical liberal activists."

“There have been inspectors, not only watching our entire duplicating process, but have been swarming around our canvassing tables," Bucher said. "And incredibly, the lawyers for the Republican party and governor have only lodged half a dozen objections to determinations of the canvassing board, and we’ve canvassed thousands of ballots.”

FDLE: No allegations of voter fraud

An FDLE spokesperson says it is working with the Florida Dept. of State, as Gov. Scott requested Friday night. The agency will investigate any allegations of fraud or criminal activity, if they come up.

Sen. Bill Nelson's campaign went before a judge Friday to ask that vote-by-mail ballots with mismatched signatures be counted in any recount that happens.

Federal Judge Robert Hinkle decided it not something that could be decided urgently, setting another hearing for 1 p.m. Wednesday.

Nelson and the Florida Democrats' executive committee are suing Florida Secretary of State Ken Detzner in Tallahassee federal court to extend the deadline for county Supervisor of Elections Offices to turn in unofficial vote counts.

In a conference call, Nelson attorney Marc Elias said their lawsuit seeks to set a uniform standard for the adjudication of provisional ballots.

About 15,000 votes separate Republican Gov. Rick Scott and Nelson in the U.S. Senate race. Elias said they think those votes will come from provisional ballots and county canvassing processes.

@NelsonForSenate accuses Governor @ScottforFlorida of "trying to stop all the votes from being counted."

Should be noted -- neither Nelson nor Scott have taken questions in past 24 hours from reporters. @MyNews13 @BN9 #FloridaRecount2018 pic.twitter.com/sDyPUtW75I

In a taped statement Friday, Nelson responded to Scott's accusations Thursday night of voter fraud by the Democrats, calling the statement "irresponsible, unethical and unprecedented."

"Scott is abusing the full force of his public office as Governor to stop a complete and accurate counting of all the votes in Florida,” Nelson said. "Which would determine whether he wins or loses. The governor has decided to abandon the most fundamental of all rights because he fears he will lose the election if all the votes are counted."

The Florida Democratic Party sued the Volusia County Supervisor of Elections, claiming she wasn’t handing over a list of people whose votes were cast on provisional ballots.

Democratic party officials are reviewing those ballots now to make sure all votes they believe are legit are counted.

The supervisor of elections says she was reluctant to release the ballot info because it would reveal how some voters voted.

“I feel like that’s a voter’s right to a secret ballot, and I did not feel like it should’ve been released – and I still don’t,” said Volusia County Supervisor of Elections Lisa Lewis. “I don’t feel like that is public record for people.”

Just minutes before a scheduled court hearing Friday afternoon, Lewis handed over the ballot list after she says the info was made public anyway during a county canvassing board meeting.

INTERACTIVE: A closer look the numbers

Spectrum News reporter Greg Angel has been tracking the election returns for the three races in question (senate, governor, agricultural commissioner) since Wednesday.

A marked difference could be seen Thursday as more votes were tabulated.

By Saturday, DeSantis had 4,073,763 million votes, and Gillum had 4,037,761 million votes, bringing the vote margin down to .44 percent, according to the Florida Division of Elections.

And in the Florida agricultural commissioner race, on Wednesday Matt Caldwell had 4,008,612 votes to Nikki Fried's 3,996,213 votes.

By Saturday, Fried was leading Caldwell in the race, 4,025,824 million votes to 4,022,704 million votes, according to the Florida Division of Elections.

A Race to Fix Provisional Ballots

Provisional ballots are given to voters because their eligibility to vote is challenged for some reason, such as an address discrepancy or a forgotten accepted ID.

Voters with issues were supposed to cast provisional ballots, and then, if necessary, provide any additional evidence that their ballots should be accepted.

The deadline to provide that information to the voter's county Supervisor of Elections Office was 5 p.m. Thursday.

These ballots are the last to be counted and are verified by county canvassing boards.

The Gillum campaign also thinks provisional ballots will be essential in an automatic recount.