Friends and Family of Courtney Furtado

The Shape of a Raindrop: It's Not What You Think

If I asked you to draw a raindrop, you would likely produce something similar to those pictured above.

It's not as far-fetched as it sounds! The shape of a raindrop is dependent on its size, so let's break it down.

Small raindrops have a radius of less than 1 millimeter.

Their shape is simple: spherical.

Medium raindrops have a radius between 1 and 4 millimeters.

This is where things get a bit more interesting. As raindrops get bigger, their surface tension weakens, which means they become more malleable.

As the raindrop falls, the force of air pushing upward flattens the bottom, and it takes on a hamburger bun appearance. 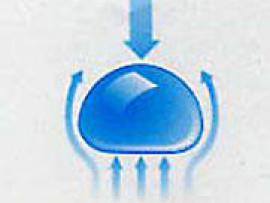 Large raindrops have a radius greater than 4 millimeters.

Keep in mind that bigger raindrops fall faster. The bottom of the raindrop sees more force the faster it falls, which flattens the raindrop even more.

At this point, you have a water droplet that has thinned out enough for the bottom to push upward and taken on the shape of an open parachute.

It then almost instantaneously breaks apart into smaller raindrops.

It's similar to blowing a bubble but having that bubble burst before it can fully form.

I imagine your mind is now blown, just like those large raindrops, because since grade school, we've all had this preconceived idea of how a raindrop looks.

Oh, how wrong we have all been, but like most things in life, one size and shape doesn't fit all, even when it comes to raindrops.