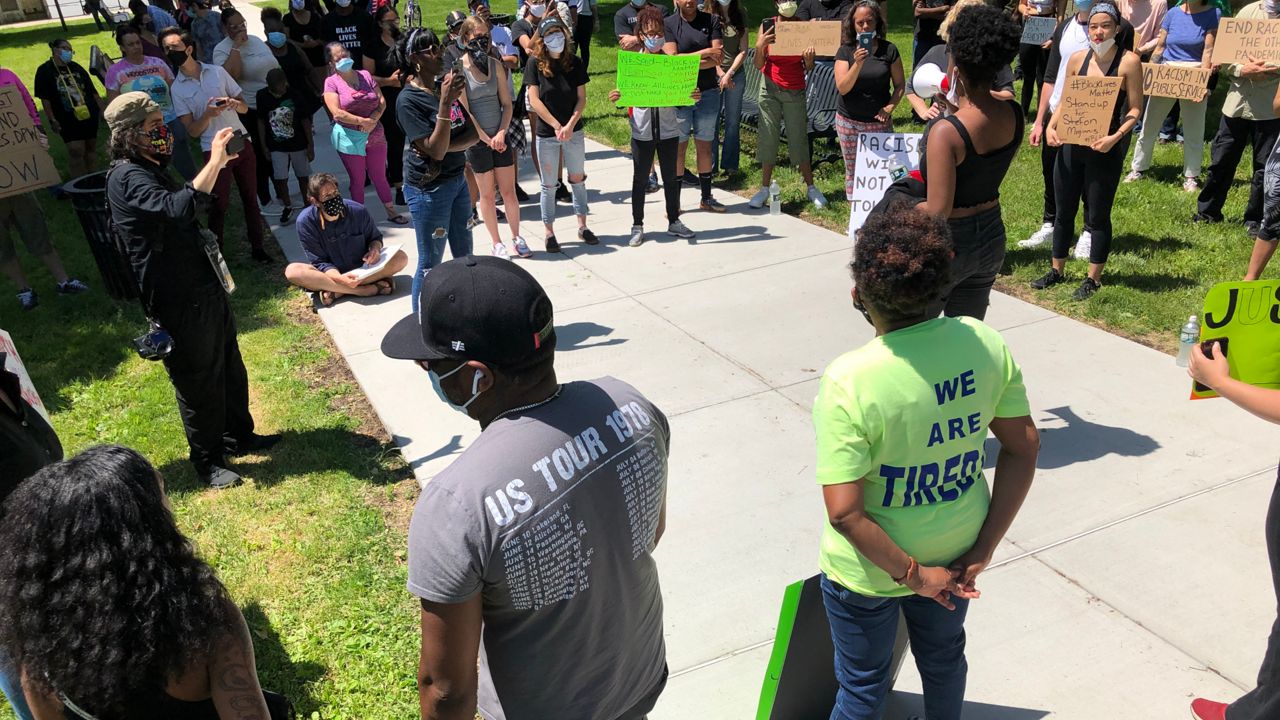 Just as 200 protestors crashed Monticello Village Hall on Thursday to demand the village remove Public Works Supervisor Ray Jones from his job for referring to a Stephon McGinnis, a black DPW employee, as a “n——r” and “n——-r-head” in a recorded conversation, Jones’ resignation was announced.

We had to censor these clips of the Monticello, #NY DPW boss talking about a black employee. Just trust me... the n-word rolls off this guy’s tongue. His resignation was announced during a protest calling for village officials to act. Turn on Spectrum News now for full story. pic.twitter.com/5b2o0Giia3

The protest began at 11 a.m. at the Sullivan County Courthouse before the group walked to Village Hall and then to the mayor’s business on East Broadway to demonstrate. A handful of locals said they began planning the protest the night before when a village meeting via Zoom was cut off before the public comment portion.

McGinnis was at work during the protest and not available, though the protestors marching by the public works department cheered when McGinnis stepped outside the side door.

“It made me feel really, really mad,” said McGinnis’s oldest daughter Jianna, standing with her younger sister, Jiovanna, who added simply, “You shouldn’t be talking that way about my dad.”

Just as the crowd arrived at Village Hall, Mayor Gary Sommers stepped out the front doors to announce Jones had just stepped down.

“I’m able to announce the former acting supervisor will be resigning, will be leaving village employment,” Sommers said into a megaphone. “At this time, I can’t release any further information because it’s an ongoing personnel matter and there’s really nothing else.”

Protestors immediately questioned why Jones was not fired once the video surfaced in mid-May.

“By not firing him, you set the standard racism is okay in Sullivan County,” said one protestor. “Your actions do that.”

Right after the heated exchange, Sommers explained to Spectrum News that the village could not immediately fire Jones since McGinnis filed his original complaint through the DPW workers’ union, which required giving union leaders 30 days to respond to the complaint.

Jones ended up resigning before the union issued its response.

“Because we had to deal with the union first, I just asked for us to take a deep breath, allow for due process and see what the union is going to request,” Sommers said.

Village Trustee George Nikolados — a local diner owner and Sommers’ opponent in the September mayoral election — said the village should have forced Jones out of his position before receiving in-person pressure from 200 community members.

“I had to hear this from the victim first hand, while Mayor Sommers, Trustee Carmen Rue, and Trustee Rochelle Massey tried to cover it up, as to not hurt their chances to keep a hold on power in Monticello,” Nikolados wrote in a statement Friday. “I’m not sure who else knew, but I can tell you, I will not stop until everything comes to light.”