The victims, a 43-year-old woman, 19-year-old woman and 21-year-old man, are expected to survive after being shot in a parking lot on the Newburgh Free Academy campus. At least five shots were fired when a dispute broke out about 9:35 p.m., 10 minutes after the end of the game, Newburgh Police Chief Anthony Geraci said at a news conference.

There were no immediate arrests.

“We’re poring through video evidence, cellphone footage, eyewitness accounts and obviously the victims who are at the hospital so there is a lot of information coming in,” Geraci said at the scene.

Investigators believe the shooting targeted certain individuals, but it was unclear whether any of the victims were among the intended targets, Geraci said.

Newburgh Free Academy released a statement thanking the quick response of law enforcement agencies and security personnel, adding that they will have more information as an investigation into the shooting is conducted.

"This evening there was a shooting incident on the grounds on one our high school campuses, outside of the security perimeter for an event taking place. We are thankful for the quick and thorough response of our local law enforcement agencies and security personnel. At this time, there is limited information that we can provide as we wait for a thorough investigation to be conducted. Our Critical Stress Management (CISM) Team is preparing to help students and families who may need support during this time. More specific information will be provided soon.We urge anyone with information about tonight’s incident to contact the City of Newburgh Detective Division at 845-569-7509. Callers can remain anonymous. The violence in our community will not end unless we each take a stand against it."

An investigation into the incident is ongoing. No arrests have been made.

Police are asking for your help. If you have any information on the two persons of interest, you are asked to call the City of Newburgh Detective Division at 1-845-569-7509. 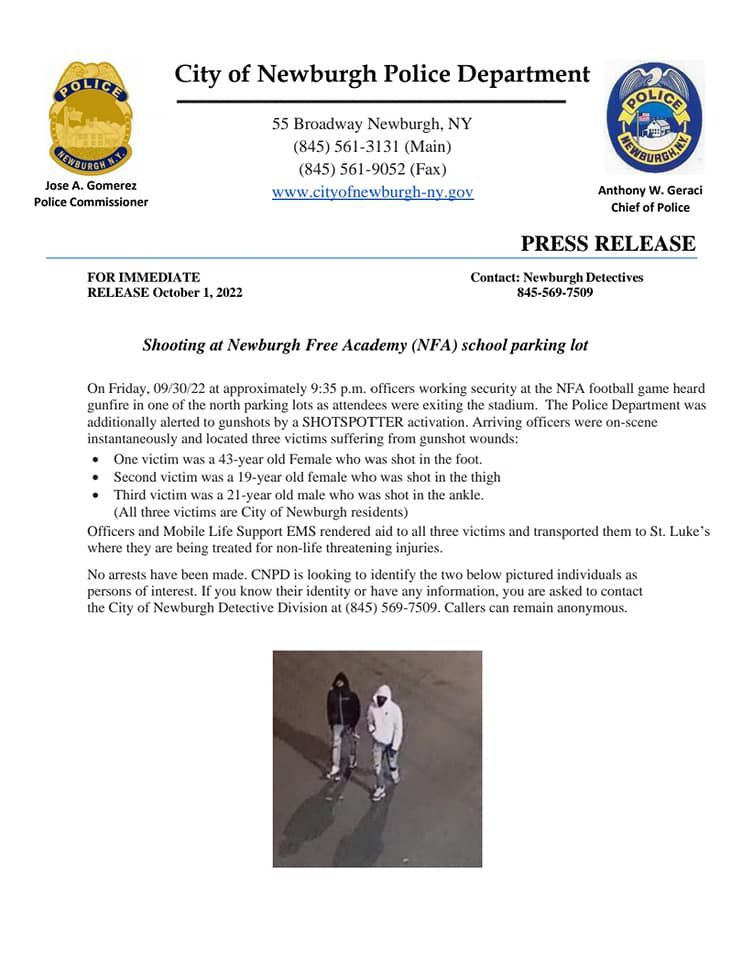