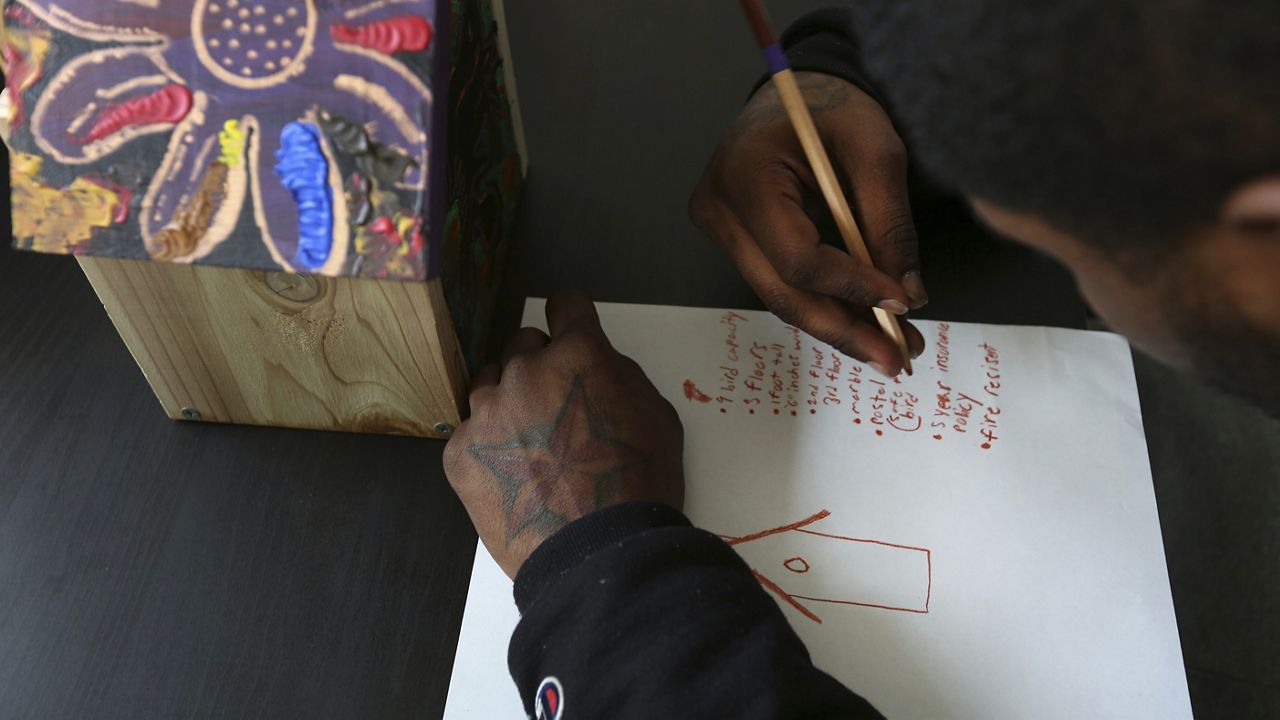 A participant lists his birdhouse's design details as he participates in a session of the "Restorative Justice" program at The Barnes Foundation Wednesday Feb. 14, 2018 in Philadelphia. (AP Photo/Jacqueline Larma)

What is Restorative Justice and How Can it Change the Criminal Justice System?

WASHINGTON, D.C. — For months, protesters around the country have been calling for changes to a criminal justice system that disproportionately penalizes Black Americans while shielding police officers accused of misconduct with protections like qualified immunity.

Advocates, lawmakers, and political candidates are proposing a range of solutions for these issues — one such approach is restorative justice, which focuses on accountability and restoration.

Restorative justice allows the victim to take on a larger role in determining the consequences, often including a meeting with the offender. In exchange, the offender may receive a lesser punishment. And the hope is that by showing the harm caused by the crime, it makes that offender less likely to commit the same act again.

It’s gained traction in recent years in some district attorney’s offices, with some promising results — one organization is now helping apply the same principles to civilians who feel as though they've been harmed by police in Newark, New Jersey.

“Right now in our punitive justice system, accountability is assumed to mean punishment but in a restorative model accountability is a much more nuanced process that involves acknowledging and understanding the harm that’s happened, working to repair that harm and making a change so that harm isn’t repeated,” explains Shari Silberstein, the executive director of Equal Justice USA.

She says Newark’s police department had a 50 percent drop in civilian complaints after the officers completed the first year of the program. It also helped improve relations with community members, who felt it gave them a voice in the process.

“When they were able to share the experience that they had of being harmed by police and have those officers hear them and hold them in their pain and apologize on behalf of police, it was very meaningful for them,” said Silberstein. But, she cautions, it’s not enough to apologize for individual incidents. Departments have to be willing to make systemic changes when necessary.

Some victims say they are open to the process.

Miracle Boyd, an 18-year-old freshman at DePauw University, says a Chicago police officer knocked her tooth out in July when she was recording them during a protest.

“I’m standing there. My mouth is hurting really bad. My mouth is like bleeding. I’m feeling around in my mouth and my tooth is gone. Instantly, I start screaming.”

The Chicago Police Department says the matter is under investigation and that they strive to treat everyone they encounter with respect.

Boyd wants to see what happened to be a catalyst for better behavior from the officer involved.

“I would hope to gain a promise of change from him,” she said. “Restorative processes are not quick, so you’ve got some work to do buddy.”

But for restorative justice to work, both sides have to be invested in the outcome — one law enforcement expert, former Burlington, Vermont, Police Chief Brandon del Pozo, is skeptical of whether departments would be able to adopt a new approach.

Del Pozo says that’s because the discipline process is often part of the labor agreement between the municipality and the police union, which can be politically powerful.

“One of the problems with American policing is there is no standard discipline process when a cop is accused of misconduct or bias,” he explains. “There are officers with indictments with a strong officers’ bill of rights and they are on the police payroll collecting pensionable time.”

But if there is any time it might be possible, del Pozo thinks now is the right moment.

“So much of what erodes the trust between citizens and police is not only the big incidents but countless little ones where cops are discourteous or they don’t explain themselves or they are just having a bad day as a human or their temper is short and restorative justice allows that lower to mid-level misconduct to be corrected in a way that really affirms a citizens trust in police."