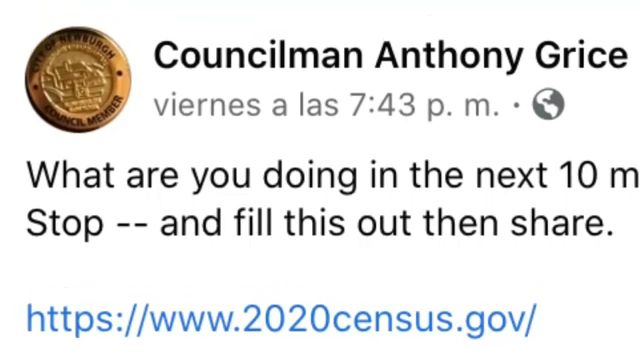 Preliminary U.S. Census data show a virtual campaign to get people counted in one supposedly historically undercounted Hudson Valley community might be working.

Local census volunteers, like those who make up the Newburgh Counts Census Committee, cannot currently go door-to-door to encourage self-responses to the surveys. Instead, they are phone-banking, text-banking and flooding social media to make the case that taking 10 minutes to respond would lead to more federal aid and better local services.

Lopez Zarate makes a connection between the quality of assistance to city residents affected by COVID-19 and the need for an accurate count in Newburgh.

The level of federal funding a municipality receives is connected to how many residents are counted in that municipality. More people counted means more assistance per year, for the next 10 years.

“Hopefully we have a better count so that in situations like this, there is better funding in the future for communities to get help," Lopez Zarate said.

Everyone interviewed for this story immediately agreed Newburgh has significantly more residents than its listed population of 28,100.

“Oh definitely,” Immigrant Rights Advocate and Newburgh Counts committee member Rene Mejia Jr. answered when asked if the latest census estimate is low. “Yes, I could safely say it is low by thousands.”

“Even 30,000 might be a little low,” At-Large Councilman Anthony Grice said.

Though census volunteers are limited to phones and the internet to solicit census responses, they have more time to do it.

Minus a pandemic, the federal government would be dispatching enumerators by now to go door-to-door seeking responses from those who have not yet responded, but because of social distancing guidelines those enumerators may not be walking the streets until mid-summer.

Still, committee members are taking a positive from the latest data. They point out that Newburgh’s self-response from early April was about 15%, having since doubled.

The increase, they believe, is due partly to an online outreach by city officials.

“Make sure you wash your hands,” wrote At-Large Councilman Omari Shakur in a recent Facebook post sharing a locally produced music video about the census. “Then... Do the Census 2020.”

“What are you doing in the next 10 minutes?” Councilman Grice wrote in a post. “Stop — and fill this out, then share.”

“Looking at the numbers, something must be working,” Mejia Jr., an activist with Nobody Leaves Mid-Hudson, said in a FaceTime interview Tuesday.

Mejia said outreaches, specifically targeting immigrants, could further drive up the self-response and help account for families who might not otherwise be counted by the enumerators later in the summer. — Historically, children and recent immigrants are difficult to count.

“They point out that ever since the immigrant caravans began, we’ve seen an increase in folks moving to the City of Newburgh,” he said. “So just by going off what the school district has seen, we can assess that Newburgh has grown its population.”