Western New York is no stranger to snow, but snow rollers definitely aren’t something you see every day.

On Monday, some people in Lancaster were greeted by mysterious balls of snow on the ground. Mother Nature’s attempt at getting a head start on building a snowman is known as a snow roller.

I was wondering if there was a name for these!! pic.twitter.com/7w69hn31B0

Also known as “snow bales”, “wind snowballs”, or “snow doughnuts”, snow rollers are formed when the wind pushes fresh, wetter snow along the ground. The end result is a hollow cylinder of snow that can vary in size.

The process itself sounds simple enough, but just like thundersnow, it can be quite a rare winter phenomenon. That’s because the set up has to be just the right combo of snow, wind, temperature, and moisture.

Ingredients For a Snow Roll

There needs to be a relatively thin layer of fresh snow that isn’t too dry or compacted, with a snow pack or icy surface already in place underneath. The snow itself needs to be wet enough that it sticks to itself, but not so much that it adheres to the ground completely.

The temperature also plays a key role. Temperatures right around freezing helps support stickier snow, all while preventing things from melting or freezing too fast.

Think of snow that’s prime for making snowballs as opposed to snow that’s a pain to even make into a snowball and that just instantly falls apart as soon as you throw it. It’s as if Mother Nature is trying to make its own sushi roll, just out of snow instead of sticky rice.

Just like the moisture content, the wind can’t be too high or low either. As Goldilocks would say, “this wind is just right” to help coax the snow up, and persistent enough to keep that snow moving.

As a result, you can actually see the paths these snow rollers travel. Gravity can also help out, especially if the snow is going downhill.

Sometimes, they can go on for several feet before settling to their final resting spot. By the end of their adventure, snow rollers can be pretty small at just a few inches, while other times they end up being more than a foot tall. 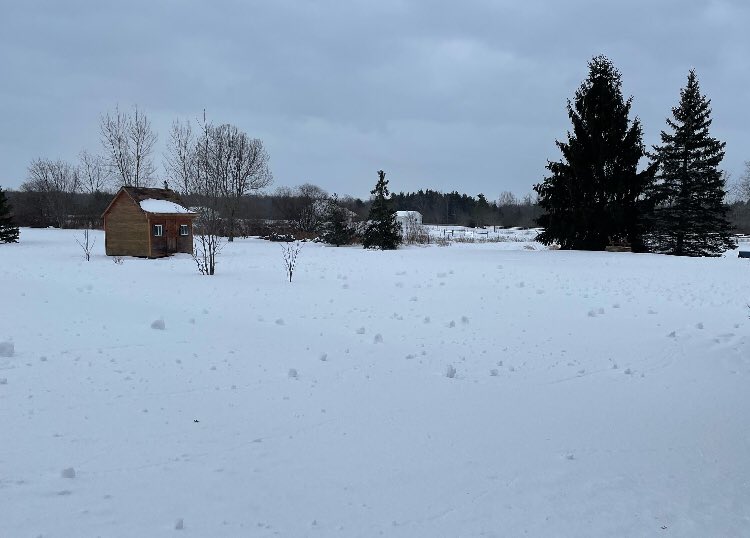 It was a pleasant surprise that some Western New Yorkers got to see on Monday. Albeit still rare, it’s a more common sight in the Plains and Midwest due to all of the wide open space there.