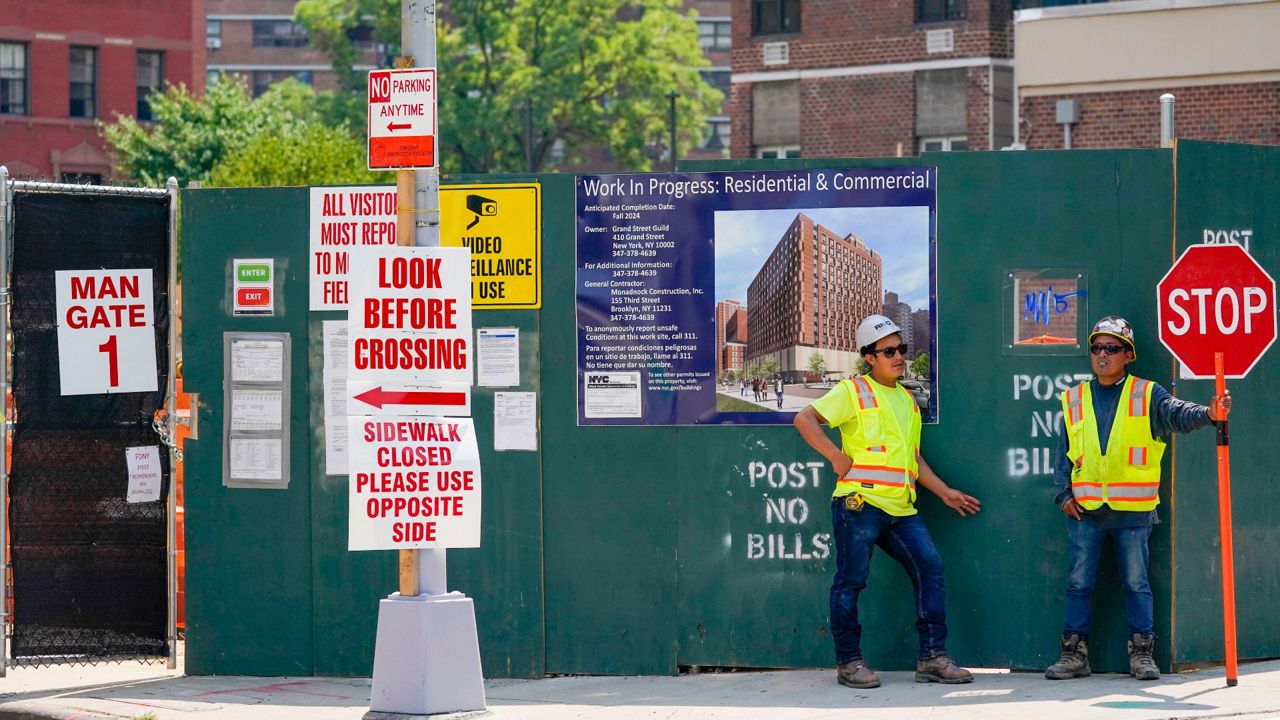 The economy has now recovered all 22 million jobs lost in March and April 2020 when COVID-19 slammed the U.S.

"Today, the unemployment rate matches the lowest it’s been in more than 50 years: 3.5%," President Joe Biden said in a statement Friday. "More people are working than at any point in American history. That’s millions of families with the dignity and peace of mind that a paycheck provides. And, it’s the result of my economic plan to build the economy from the bottom up and middle out. I ran for president to rebuild the middle class – there’s more work to do, but today’s jobs report shows we are making significant progress for working families."

July's job creation was up from 398,000 in June and the most since February.

"In 2021, when [President Biden] got sworn into office, he had a plan to get people back to work," Labor Secretary Marty Walsh extolled in an interview with Spectrum News on Friday. "Eighteen months later, 10 million Americans that weren't working the day he was sworn in as president are now working."

Walsh told Spectrum News that after seeing such success in terms of hiring, the department's next goal is to get into training and workforce development. Walsh specifically mentioned that with projects from President Joe Biden's $1.2 trillion infrastructure law and the recently passed Chips and Science Act, a bill aimed at bolstering domestic chip manufacturing, set to go into effect soon, such development will be crucial to get people into the jobs those bills are set to create.

"Our goal is not just to get people back to work and get them into good sustaining jobs, middle-class jobs," Walsh told Spectrum News' Taylor Popielarz on Friday. "With the infrastructure law ... with the chips bill ... creating more manufacturing jobs, we need to make sure people that are in lower-wage, lower-skill jobs, that they have an opportunity to access those good-paying jobs."

Another focus, Walsh said, will be to "get people back into the workforce."

"We still have people that are that are not working yet," he said. "We need to reach out to them and get them back into the workforce."

The red-hot jobs numbers from the Labor Department on Friday arrive amid a growing consensus that the U.S. economy is losing momentum. The U.S. economy shrank in the first two quarters of 2022 — an informal definition of recession. But most economists believe the strong jobs market has kept the economy from slipping into a downturn.

The surprisingly strong jobs numbers will undoubtedly intensify the debate over whether the U.S. is in a recession or not. Criticism of the bill was largely muted, with Congressional Republicans instead choosing to lambaste Democrats' climate and tax plan, the Inflation Reduction Act, and assert that the United States is currently in a recession.

"We're in a recession, this is going to make it worse," South Carolina Sen. Lindsey Graham said of the bill; Louisana Sen. Bill Cassidy called the measure the "American Recession Plan 2.0" and said it would induce a recession.

Cassidy did, however, acknowledge the strong jobs growth in Friday's report: "I'm very pleased we've got strong job growth, but we're in a recession," he said Friday. Graham lamented the fact that "people can't find workers."

But key economists are mixed regarding the assertion that the country is in a recession, especially in the wake of Friday's report.

"Recession – what recession?'' wrote Brian Coulton, chief economist at Fitch Ratings, wrote after the numbers came out. "The U.S. economy is creating new jobs at an annual rate of 6 million – that's three times faster than what we normally see historically in a good year. ''

Economists had expected only 250,000 new jobs this month. When asked why analyst expectations were so far off, Walsh told Spectrum News that the U.S. is in "uncharted territory" in terms of economc rebound.

"I just think it's we're living in a very different time," he said, adding: "If you look at the last 18 months here ... you're dealing with a pandemic, or that you're seeing surges in certain parts of the country, you're seeing low rates in certain parts of the country, and sometimes we're seeing surges in hospitalization, we're still living in in the pandemic time."

"And then during the pandemic, a lot of people, I think, evaluated where they were in their life, looking for better opportunities and better options," Walsh continued, adding that the U.S. will be in "this kind of uncharted territory for a little bit."

Speaking at a bill-signing at the White House on Friday afternoon, Biden acknowledged that many Americans will have trouble viewing the jobs report as a sign the economy is strong when inflation is hitting them hard financially.

“They don't feel it in their own lives,” he said. “I know how hard it is. I know it's hard to feel good about job creation when you already have a job and you're dealing with rising prices, food and gas and so much more. I get it.”

Biden said he’s “doing everything in my power to lower the costs of families,” touting that gas prices have fallen about $1 a gallon over the past month and legislation poised to pass in Congress would lower prescription drug costs and keep health care costs down.

The Labor Department also revised May and June hiring, saying an extra 28,000 jobs were created in those months. Job growth was especially strong last month in the healthcare industry and at hotels and restaurants.

Hourly earnings posted a healthy 0.5% gain last month and are up 5.2% over the past year — still not enough to keep up with inflation.

The jobless rate fell as the number of Americans saying they had jobs rose by 179,000 and the number saying they were unemployed dropped by 242,000. But 61,000 Americans dropped out of the labor force in July, trimming the share of those working or looking for work to 62.1% last month from 62.2% in June.

Walsh told Spectrum News that the federal government should work with businesses in order to address people leaving the workforce due to low wages, but did not believe the government should be telling companies what to do. Walsh touted recent roundtable discussions he and other cabinet secretaries have had with businesses and labor leaders in order to create good dialogues about opportunities for employers and workers.

Dr. Christopher Kayes, a professor of management at the George Washington University School of Business, told Spectrum News that many people are looking for new jobs because of the COVID-19 pandemic and inflation.

"Between pay, better working conditions, and better bosses, those are the three things that are really driving the ‘Great Resignation’ today," Dr. Kayes told Spectrum News' Taylor Popielarz on Friday.

The strong job numbers are likely to encourage the Federal Reserve to continue raising interest rates to cool the economy and combat resurgent inflation. "The strength of the labor market in the face of ... rate tightening from the Fed already this year clearly shows that the Fed has more work to do,' said Charlie Ripley, senior investment strategist at Allianz Investment Management. "Overall, today's report should put the notion of a near-term recession on the back-burner for now.''

There are, of course, political implications in the numbers being released Friday: Voters have been worried about rising prices and the risk of recession ahead of November's midterm elections as President Biden's Democrats seek to maintain control of Congress. The unexpectedly strong hiring number will be welcomed at the White House.

The economic backdrop has been troubling: Gross domestic product — the broadest measure of economic output — fell in both the first and second quarters; consecutive GDP drops is one definition of a recession. And inflation is roaring at a 40-year high.

Walsh said that the Biden administration is working to address inflation in a number of ways, including releasing fuel supply from the Strategic Petroleum Reserve to lower gas prices, actions to fix supply chains and backing the Inflation Reduction Act, which the Senate is set to pass next week.

"This was not caused by this president," Walsh claimed. "We didn't have a plan coming out of the last administration [on] how to move our economy forward. And now the president is working on that."

The resiliency of the current labor market, especially the low jobless rate — is the biggest reason most economists don't believe a downturn has started yet, though they increasingly fear that one is on the way.

Recession is not an American problem alone.

In the United Kingdom, the Bank of England on Thursday projected that the world's fifth-largest economy would slide into recession by the end of the year.

Russia's war in Ukraine has darkened the outlook across Europe. The conflict has made energy supplies scarce and driven prices higher. European countries are bracing for the possibility that Moscow will keep reducing — and perhaps completely cut off — flows of natural gas, used to power factories, generate electricity and keep homes warm in winter.

If Europeans can't store enough gas for the cold months, rationing may be required by industry.

Economies have been on a wild ride since COVID-19 hit in early 2020.

The pandemic brought economic life to a near standstill as companies shut down and consumers stayed home. In March and April 2020, American employers slashed a staggering 22 million jobs and the economy plunged into a deep, two-month recession.

But massive government aid — and the Feds decision to slash interest rates and pour money into financial markets — fueled a surprisingly quick recovery. Caught off guard by the strength of the rebound, factories, shops, ports and freight yards were overwhelmed with orders and scrambled to bring back the workers they furloughed when COVID hit.

The result has been shortages of workers and supplies, delayed shipments -- and rising prices. In the United States, inflation has been rising steadily for more than a year. In June, consumer prices jumped 9.1% from a year earlier — the biggest increase since 1981.

The Fed underestimated inflation's resurgence, thinking prices were rising because of temporary supply chain bottlenecks. It has since acknowledged that the current spate of inflation is not, as it was once referred to, " transitory."

Now the central bank is responding aggressively. It has raised its benchmark short-term interest rate four times this year, and more rate hikes are ahead.

Before Friday's blockbuster hiring report, the labor market had shown other signs of wobbliness.

The Labor Department reported Tuesday that employers posted 10.7 million job openings in June — a healthy number but the lowest since September.

And the four-week average number of Americans signing up for unemployment benefits — a proxy for layoffs that smooths out week-to-week swings — rose last week to the highest level since November, though the numbers may have been exaggerated by seasonal factors.

"Underestimate the U.S. abor market at your own peril,'' said Nick Bunker, head of economic research at the Indeed Hiring Lab. "Yes, output growth might be slowing and the economic outlook has some clouds on the horizon. But employers are still champing at the bit to hire more workers. That demand may fade, but it's still red hot right now."