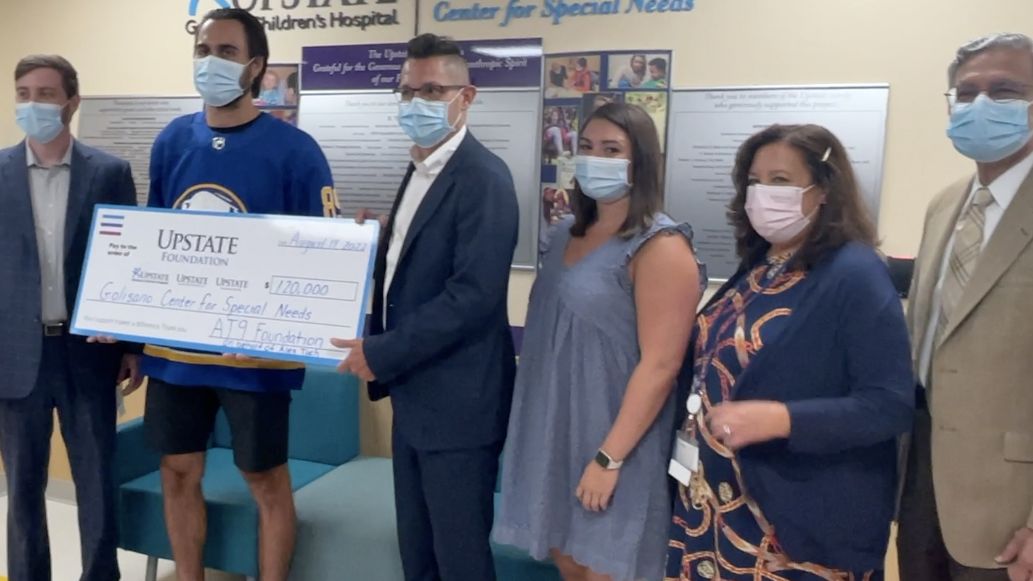 Alex Tuch, a hockey star from Central New York, has been living his dream, playing for the Buffalo Sabres, the team he grew up watching.

He’s already a fan favorite, but it’s not just because his play on the ice.

“I’d like to present the Golisano Center for Special Needs with this check from the AT9 Foundation. We’re really honored and privileged to be able to lend a helping hand," Tuch said.

Tuch was back in town to presenting a $120,000 check to the Golisano Center.

“Our two pillars are pediatric cancer and children with special needs. It was a no-brainer for us," Tuch said.

The AT9 Foundation is a nonprofit established by the Baldwinsville native and his family.

“I’ve had small experiences with kids with special needs. To see them have the whole world pinned against them and come into each day with a smile on their face really showed me to take every day in stride, really focus on all the positives in life," Tuch said.

The Sabres forward took a tour, and got some laughs along the way getting to see his impact.

“It’s really nice to be back. I’m happy to be here at Golisano's because they’ve done such an amazing job over the years. To be able to be a part of it is pretty special," Tuch said.

It was time for the main event, the multi-sensory room that the AT9 Foundation and Alex Tuch named.

“We want to have something that can be relaxing, and can also be a reward for them," Dr. Henry Roane said.

Tuch served as honorary co-chair of the Upstate Foundation's campaign for the Golisano Center for Special Needs, which has raised more than $6.5 million.