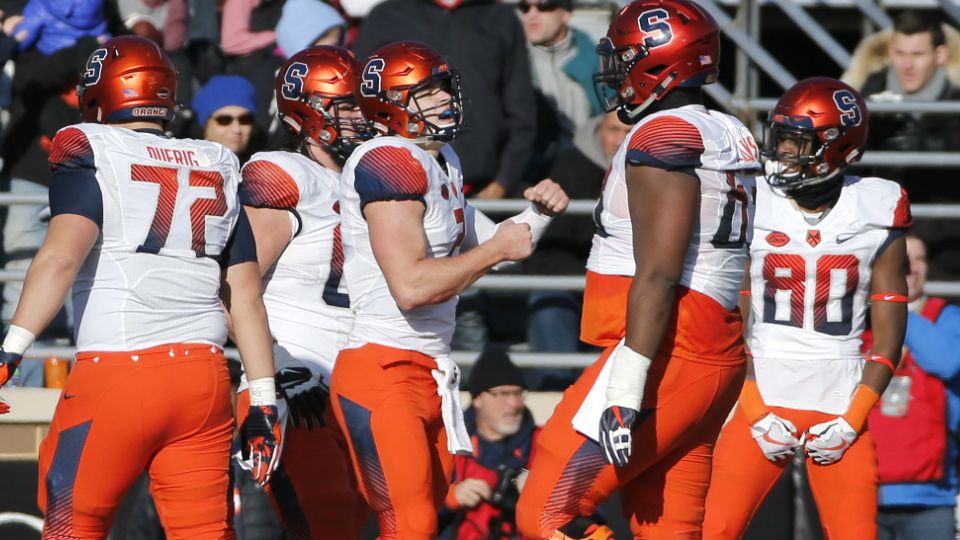 Syracuse quarterback Eric Dungey, center, celebrates with teammates after rushing for a touchdown during the first half of an NCAA college football game against Boston College, Saturday, Nov. 24, 2018, in Boston.

SU is going bowling, and this time they're heading to Orlando.

Dino Babers and the Orange will be taking on the West Virginia Mountaineers in the Camping World Bowl on December 28.

The rivalry dates back decades — as early as 1945. SU holds a 30-27 series lead against West Virginia. This is Syracuse's second appearance in the Camping World Bowl.

The Orange finished the regular season with a 9-3 record.

Fans who watched Selection Sunday at Tully's say this bowl game bid is a perfect cap to a stellar season.

"This year, they're fantastic compared to last year. Dungey's been great, the backup quarterback's been great, the whole team has actually been really great. Defense is good. I think we'll do OK,” said fan Jim Randall.

Anyone interested in heading to Orlando can visit this website. Be prepared to pay, though; the Syracuse website is offering a package that includes hotel, airfare and tickets for nearly $2,000.

Those looking to set up the trip themselves should note that some round-trip flights out of Hancock International Airport are currently hovering around the $700 mark. Hotel prices vary, depending on how close you want to be to the stadium in Orlando, but most are ranging from $90 to around $200 a night.