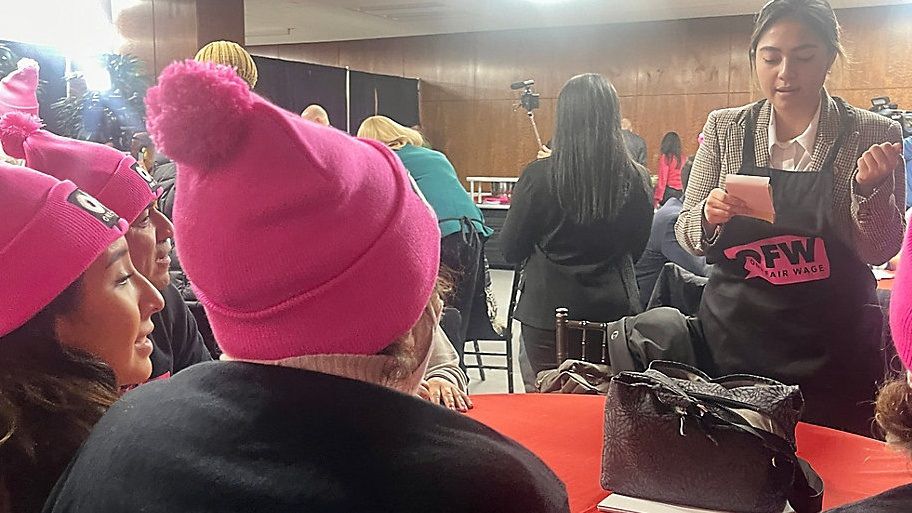 Sen. Kristen Gonzalez takes a lunch order for a restaurant worker in the Empire State Plaza on Monday as part of an event to push to phase out the subminimum wage for tipped workers in the next budget. (Spectrum News 1)

Bill reintroduced to phase out subminimum wage for tipped workers

Restaurant workers in New York currently earn 66% of the minimum wage before tips, and several state lawmakers want to change that.

About a dozen state senators and assembly members took orders and served lunch Monday afternoon to restaurant workers from New York City who came up to the Capitol for the day.

They switched places with people in the service industry to raise awareness for One Fair Wage legislation, which was reintroduced to phase out the subminimum wage for tipped workers over five years.

The bill would establish a grant program for restaurants to afford raising wages for workers as soon as possible, and a business plan going forward.

It would also allow for tips to be shared between workers in the front of the house and back of the house of a restaurant, which is currently illegal in New York.

González-Rojas, a Queens Democrat, is confident this will be the year a plan to phase out the subminimum wage is included in the state budget after Gov. Kathy Hochul announced her support to tie the minimum wage to inflation in her State of the State address Jan. 10.

Estefania Galvis, an organizer with One Fair Wage, formerly worked as a server and bartender in New York City. She moved to the state from Florida, and was surprised by some of her paychecks.

She says servers are often paid late or less than what they've earned, and a pay standard would bring equity to the industry.

"When workers are mistreated, they don't feel great at work, so there's a back-and-forth situation where customers start not coming back," Galvis said Monday. "It is in the interest of the business to have happy employees, to have valued employees that are ready and happy to work."

About 1.2 million workers have left the restaurant industry nationwide since the pandemic, according to the U.S. Department of Labor.

But Scott Wexler, executive director of the Empire State Restaurant & Tavern Association, said activists cite instances of wage theft from a handful of restaurants statewide, which should be reported to the state Department of Labor. The department has made wage theft a top priority, he added.

"They want to change the law to fix the problem of a small number of restaurants instead of leaving the law the way it is that works so well for restaurant owners and restaurant workers throughout the rest of the state," Wexler said.

No worker in New York can be paid below the minimum wage. If a tipped worker makes below the state's minimum wage of $15 per hour in New York City and $14.20 upstate, the restaurant or business must make up the difference under state labor law.

The average restaurant worker in New York makes between $18 and $24 an hour after tips, Wexler said.

"Workers and employers have found that when you set a minimum wage should be paid, at least two-thirds, plus tips, that the workers do very, very well," he said.

But lawmakers pushing to change the system argue tipped wages exploit certain groups, especially women, people of color and immigrants, who were impacted most by the COVID-19 pandemic. People who make the subminimum wage are more likely to experience sexual harassment and racial discrimination.

González-Rojas says her colleagues are excited about the bill, with a growing number signing on as co-sponsors like Sen. Gustavo Rivera, a Democrat from the Bronx.

He pushes back against people who argue businesses in the service industry cannot afford changing the minimum wage system for its workers amid rising costs.

"This is absolutely the time," Rivera said. "It is always the right time to do the right thing."

Several lawmakers say with a $220 billion budget, the state can afford to help all working class New Yorkers.

Democrats in the Senate and Assembly majorities have not conferenced the measure, and continue to wait on Hochul's executive budget proposal due Feb. 1.

Hochul's office has not released details of when or where the governor will hold her budget presentation within the next eight days.