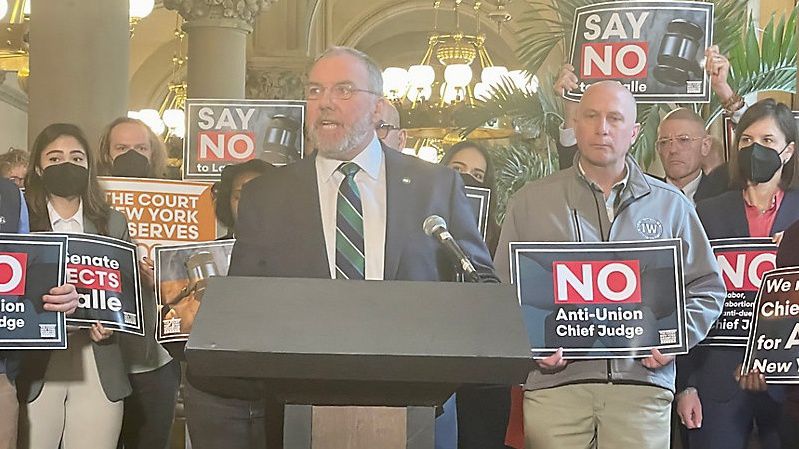 Labor union leaders are joining a heated fight against Gov. Kathy Hochul's nomination of Justice Hector LaSalle to be the state's next chief judge of the Court of Appeals.

Increasing turmoil over the governor's choice to be the state's most powerful judge is dominating the conversation here in the first days of the new legislative session and Hochul's first full term as governor.

Several lawmakers, labor union representatives and advocates rallied in the state Capitol on Monday morning, shouting "No to LaSalle!" "No to LaSalle!", hoping their cries would reach the governor's ears.

"We stand here today, not only for the members that we represent, but for the future of our state and ensuring that we have a court of appeals that works for everyone," said Deborah Wright, Political Director of United Auto Workers Region 9A. "New York cannot afford to continue slipping in its once proud reputation of being a leader in jurisprudence in this country, especially when we know we have a conservative U.S. Supreme Court who is bent on going to strip all of our fundamental rights through long-held precedent."

Advocates, senators rallying in the Capitol against Justice Hector LaSalle, who @GovKathyHochul nominated to be NY’s next chief judge.

They cite concerns of some past decisions they say are anti-abortion & anti-union, & his background as a prosecutor as inappropriate for NY. pic.twitter.com/YOxg9VK1Hn

Progressive senators have come out in force against LaSalle from the beginning, saying he will push the state's highest court more politically conservative, citing a handful of his past decisions they say are anti-union, anti-abortion and anti-due process.

"If this nomination is, in fact, brought to the floor for a vote, I'm going to be voting no, and I want to urge my colleagues to join me in rejecting this nomination," said Sen. Julia Salazar, a Brooklyn Democrat.

Several senators and organizations sent Hochul a letter warning her of their concerns about LaSalle last year before he was selected as the nominee. An increasing number of lawmakers and labor unions are angry the governor didn't listen, and say they won't back down.

Stronger pushback is mounting from the state's largest and most powerful labor unions, like 32BF SEIU, CWA District 1 and several others.

James Mahoney, president of the state District Council of Iron Workers, railed against Hochul's choice Monday, saying LaSalle has permitted lawsuits to intimidate union leaders in the past.

Many labor union leaders are here and they’re angry.

Jimmy Mahoney, Iron Workers union general VP, says they “were team @GovKathyHochul” and helped her get elected “when the phone rang,” & she needed more money.

“This is not good for organized labor,” he says. pic.twitter.com/u3fGTsaSg0

He said the governor's pick is a backstab to the labor unions who helped get her elected in a close contest this fall.

"You forgot us before you got sworn in," Mahoney said. "I'm not unhappy about this, I'm apoplectic. It's wrong. We got her elected! I'm not going to stand for it. She's going to try and bully it through, but this has been done terribly. You have to talk to labor. We are behind the Democratic Party, but you got to show us that you're with us, too."

“The way it was rolled out was so unprofessional and so back-stabbing,” Mahoney said of Hochul. “You just can’t do this. You take us for granted.”

Several Democrats have also come out in support of LaSalle to be the state's first Latino chief judge, including Lieutenant Governor Antonio Delgado, Assembly Speaker Carl Heastie, and a handful of congresspeople and state senators.

Several former justices and experts have defended LaSalle's record, saying his record is being mischaracterized.

It's up to members of the Senate Judiciary Committee to advance LaSalle's nomination to the floor for a vote.

Senate Majority Leader Andrea Stewart-Cousins has suggested he doesn't have the support from senators to get over the finish line, and she's not concerned how that will impact her working relationship with the governor ahead of upcoming budget negotiations.

She said Monday it'd be easier if Hochul rescinded her nomination and chose another candidate Democrats agree would best serve New Yorkers.

"Afriad doesn't fall in my vocabulary," said the leader, a Democrat from Yonkers. "No, I'm not afraid, and again, I always, and we as a conference, always operate with the understanding that we're here to serve the people of New York."

This means it might come down to Republican senators supporting the governor's nominee — influence members of the Senate minority don't typically have in a chamber with a Democratic supermajority.

Senate Minority Leader Rob Ortt says his conference will keep an open mind about LaSalle and that he deserve a fair hearing as required in the state Constitution.

They might be willing to support LaSalle, but Ortt says Hochul hasn't called him, or his members, to support her pick.

"If she's not willing to show the courage to get up there and fight for her nominee, which may include working across the aisle, I don't think that bodes well for a lot of other issues this session," said Ortt, a Republican from North Tonawanda.

The Senate announced its committee appointments Monday afternoon, including several new members to the Senate Judiciary Committee responsible for holding LaSalle's confirmation hearing and advancing or rejecting his nomination to a floor vote. Most of the new members have expressed they don't plan to support LaSalle.

Most have expressed reservations about LaSalle pic.twitter.com/TK2WDUq1t9

Senate Judiciary Committee Chair Sen. Brad Hoylman, says with committee assignments announced, he expects the hearing date to be set imminently within the next few days, or this week.

Representatives with Hochul Monday referred to the governor's statements last week defending her choosing LaSalle, and the criticisms of a few cases of his record of more than 5,000 cases are misleading and unfair.

"I selected the very best person," she said Friday. "Hector LaSalle has an exceptional record. He’ll be the person that’ll bring a fractured court together. He’ll be fair. He’ll be just. And a review of his 5,000 cases will reveal that. So that’s why the process will be to go to the committee, even if it’s stacked. He’ll have a hearing. We’ll go to the floor of the Senate because that's what this constitution provides for."

Visitors will be restricted from entering the state Capitol during Hochul's State of the State address Tuesday, until about 2:30 p.m., possibly signaling concern about protests during her speech in the Assembly chamber to begin at 1 p.m.

The Senate has 30 days following the governor's nomination to hold a confirmation hearing. Hochul announced her selection Dec. 22 when lawmakers were in Albany for a special session to raise their annual pay to $142,000. Several lawmakers have said her selection came without warning and as a surprise.