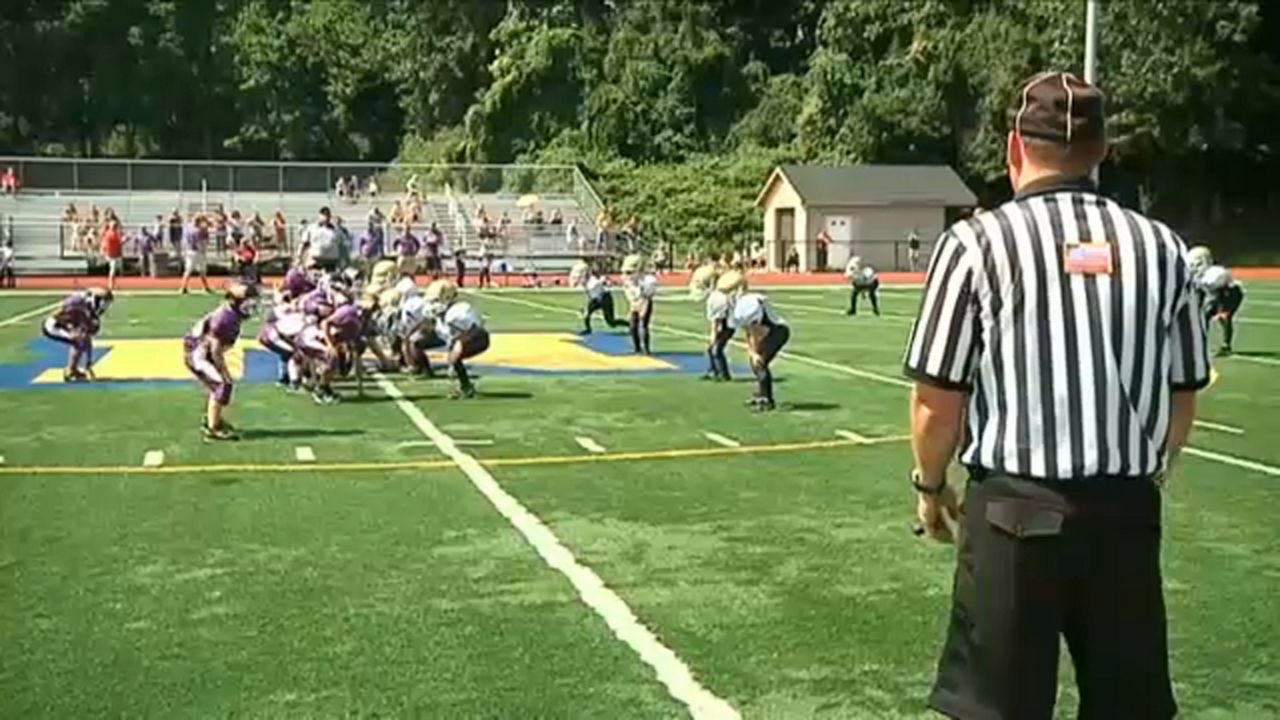 Assemblyman Michael Benedetto plans to reintroduce legislation to ban tackle football in New York leagues and schools for children 12 and under this session. (Spectrum News 1)

Conversations are swirling about the health and safety of football players after Buffalo Bills safety Damar Hamlin suffered cardiac arrest on the field after a tackle Monday night.

Millions of people watched Hamlin collapse Monday after colliding with Cincinnati Bengals receiver Tee Higgins. Hamlin, 24, was administered CPR for several minutes on the field and remains in critical condition at the University of Cincinnati Medical Center.

Prior to Monday night's concerning incident, Assembly Education Committee Chair Michael Benedetto was planning to relaunch efforts behind his bill to ban tackle football for children in New York ages 12 and under.

Benedetto, a Democrat from the Bronx, spoke of plans this fall to reintroduce the measure in the next legislative session, which begins Wednesday.

"It's not just concussions, and this is the important thing," he said Tuesday. "It's about a multiplicity of hits to the head — young heads here we're talking about, with kids' brains still developing."

He says his reignited push for the legislation, which he first sponsored since 2013, is unrelated to Hamlin's devastating injury. Benedetto added his bill to ban youth tackle football in New York leagues and schools should not be conflated with Monday's incident, which could happen in many sports.

The cause of Hamlin's injury is unclear. He remains in intensive care.

"If you get hit in the chest in a certain spot, these things can happen ... and I don't even know if that's the case that happened here," Benedetto said. "I don't want anybody to even think that I'm trying to capitalize on the tragedy of what we have here. Mine is something completely separate."

Meanwhile, Hamlin's injury is spurring talk of action at the federal level.

In a statement, Buffalo Congressman Brian Higgins said he's praying for Hamlin to make a full recovery, for his loved ones and the Buffalo Bills family. He added the injury will prompt discussions of potential policy changes to protect football players.

"In the short term, we’ve reached out to leadership on the House Energy and Commerce Committee, which has jurisdiction over sports-related issues, to first and foremost advance a dialogue about player health and safety, and the mental health of the NFL players, coaches and staff following this traumatic event," Higgins said.

More than 2.8 million children ages 6 to 14 in the U.S. play tackle football, and are 15 times more likely to sustain head impacts than flag football athletes, according to the U.S. Centers for Disease Control and Prevention.

The bill has been met with pushback for years from several lawmakers on both sides of the aisle, and lacks a sponsor in the state Senate.

Republicans in the Assembly Minority conference are prepared to stand united against the push.

Assembly Minority Leader Will Barclay feels the ban would be an overreach, and that kids can play football safely with the proper equipment and protocols.

"Obviously, you always worry about children's health and concussions are a part of that, but I know the technology has come a long way and progressed," Barclay said Tuesday. "Things even in the NFL have come a long way. There's a big difference between young people playing football and versus the NFL, and I think it can be done safely."

Children participating in tackle football has declined more than 20% over the last decade with growing concerns about the long-term effects of concussions on developing brains. Americans are about evenly split on tackle football's appropriateness for children, with 45% supporting it and 50% opposed, citing safety issues, according to a March 2022 study from The Ohio State University. Opposition to youth tackle football varies widely depending on race, ethnicity, gender and socioeconomic status.

That's why Benedetto says New York must lead the nation in taking action. He'll be discussing the effort with fellow lawmakers in the coming weeks as they return to Albany.

"I hope the time is now," he said. "I hope people are beginning to be more sensitive to the idea — that I don't want to stop football from being played, I just want to protect children at their most vulnerable time to head injury. And this is not going to kill the game, and in fact, may help the game in the long run."

Lawmakers have debated this topic for years, but it was placed on the back burner throughout the COVID-19 pandemic.

Hamlin's injury should not be compared to a child sustaining impacts to the head over several years of their growth and brain development.