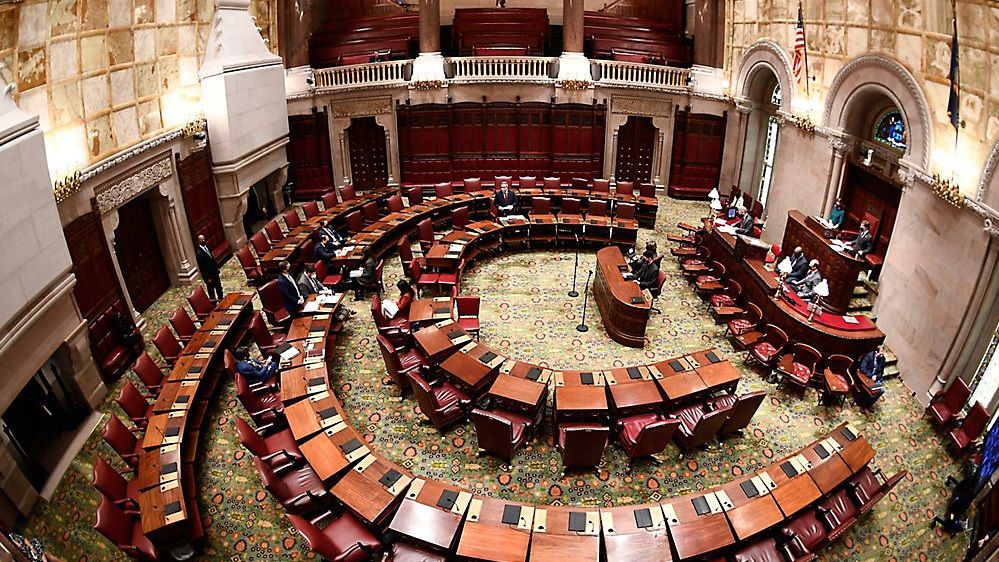 Legislative leaders could call lawmakers back to Albany for a special session next week to increase lawmakers' pay and cap their outside earnings. (AP)

Calls are mounting for the Legislature to ban lawmakers from earning outside income in certain professions and cap their earnings in others as legislative leaders work on a deal to raise their salary and limit their outside income.

New York lawmakers currently make $110,000 per year. Sources say they're considering raising their salaries to $130,000 during a special session and are considering a 15% cap for lawmakers' outside income from certain professions — similar to members of Congress.

"That creates a conflict and we believe that no lawmaker, no elected official in New York state, should be serving two masters," New York Public Interest Research Group Executive Director Blair Horner said. "Then one way to ensure that they're only serving one — the public, that they're designed to serve — is by limiting outside income."

Horner and several good-government groups sent a letter to Gov. Kathy Hochul and legislative leaders this week, urging them to restrict outside income for lawmakers if they plan to increase their pay.

Outside Income Letter by Luke Parsnow on Scribd

Advocates like Horner are recommending a complete ban on income from certain professions and a 15% cap for income in permissible ones. That would amount to about a $20,000 limit if lawmakers get the raise they're talking about.

Hochul on Thursday suggested reducing outside income is something the Legislature should include in a pay raise proposal.

"That seems to be if you're having a pay increase, that that would be something I would think, in the interest of transparency and accountability, that people would expect," she said during an unrelated briefing in the state Capitol.

New York lawmakers have supplemented their salaries for centuries. New York's Legislature was seen as a part-time job from its inception through the early 20th Century.

Lauren Kozakiewicz, a history lecturer at UAlbany, says the Legislature evolved into a modernized business in the 1970s and 1980s with separate staff budgets that needed full-time work.

She says lawmakers would need a raise to adapt to limiting their other resources, and could put pressure on the Legislature to compensate representatives for serving on committees or higher travel reimbursement.

"From a legislator's perspective, capping outside income without compensating for what you do inside the Legislature becomes problematic for them, or anyone who would want to run and serve in the Legislature," she said Friday.

But the outside income cap may lead to more ethics violations.

"New York's history is pretty checkered when it comes to behaving ethically," Kozakiewicz said. "So if income is removed from one side, there seems to be a tendency to develop workarounds that may not be to good-government types, virtuous."

Republicans in the state have spoken out vehemently against the potential pay increase, blasting their Democratic colleagues for the idea during a time of high inflation and costs.

"The Senate Democrat's plan to support a special session before the holiday simply to raise their pay is incredibly tone deaf  — even by Albany standards," Senate Republican Campaign Committee spokeswoman Katy Delgado said in a statement Friday. "A recent Siena poll listed cost of living and crime as the public's top priorities for the Legislature heading into 2023. Pay raises for politicians didn't make the list. Clearly, the Senate Democrats are more focused on serving themselves than the public during the holiday season."

Hochul has said she supports a pay increase for the Legislature. But she was quick to squash the possibility of lawmakers addressing other significant business if they return to Albany.

"I guarantee the nature of that would be a very short session," the governor said. "This may or may not be the place to bring in larger issues, so that is to be determined."

Lawmakers have considered a similar outside income ban or limit for years. Horner says the list of recent scandals with multiple former state lawmakers and top leaders convicted of crimes like bribery, conspiracy, tax evasion, fraud and racketeering is changing the conversation in Albany.

"The issue has been kicking around since the most recent scandals that have ended up with the heads of the Senate and Assembly going to prison for corruption for some of their moonlighting activities," Horner said of former Assembly Speaker Sheldon Silver and Senate Majority Leader Dean Skelos. "That's triggered the most recent sort of focus on this."

Hochul has not seen a proposal to date.

Legislative sources Friday said talks are ongoing. They don't expect to reach an agreement or announce concrete details of the proposal until early next week.

If a special session happens, it's expected to take place late next week.