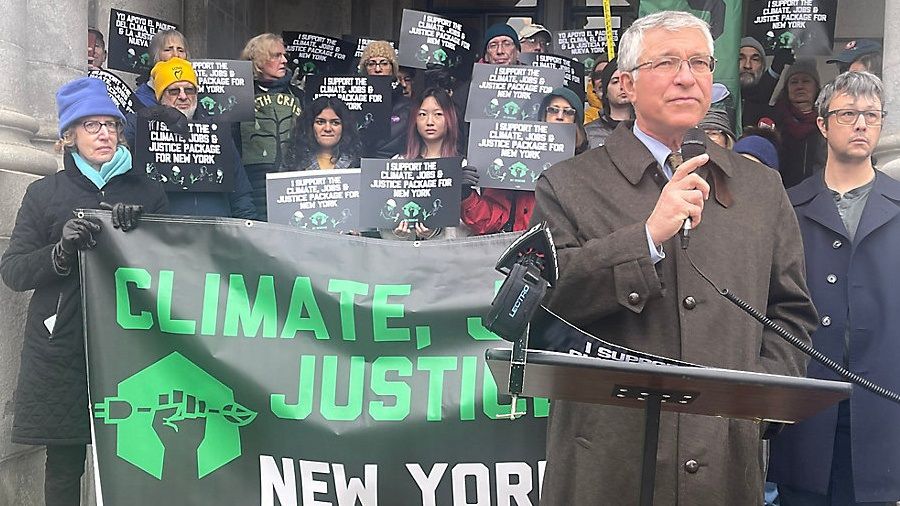 Advocates and lawmakers rallied in eight cities Wednesday to unveil legislation and invest billions of dollars for the state to meet its legally required reduction of greenhouse gas emissions and carbon footprint under the Climate Act.

They're pushing for lawmakers to prioritize several bills in NY Renews' Climate, Jobs and Justice Package to help the state transition to a green economy, protect air and water, create jobs and more to satisfy its climate goals.

"The CLCPA that passed has very aggressive goals for New York state, but the funding for those changes and the staggering crisis our state is facing due to climate change is unbelievable, so that state's going to need more revenues," NYPIRG Executive Director Blair Horner said during Wednesday's rally outside the state Capitol in Albany.

“When you have 70-degree weather in Albany, NY in November, that ought to send a message to folks that we are facing a very real climate crisis,” @PhilSteck says at a rally for a Climate, Jobs & Justice the Capitol legislative pkg to fully fund & implement NY’s Climate Act. pic.twitter.com/ENLHV0KXNX

The package of bills includes measures to close tax loopholes benefiting polluters and give state agencies the power to reduce utility companies' emissions, as well as a plan to redevelop fossil fuel sites and create other programs and incentives.

A priority is the Climate Change Superfund Act, which would charge oil companies and their shareholders $30 billion over the next decade to reverse the climate crisis in New York.

"Companies should learn something that we all learned in kindergarten — you make a mess, you clean it up," Horner said. "And they are responsible for the mess that we're in now."

The legislation would place the burden on fossil fuel companies, removing the burden from taxpayers.

"They are spending money now to subsidize polluters because what happens is, when there’s pollution and the costs of that pollution are remediated by the state of New York, the voters are paying for all that with their tax dollars," said Assemblyman Phil Steck, a Democrat from Colonie who co-sponsors most of the proposals. "So we need to be more proactive on this issue."

People of all ages at the rally begged lawmakers to prioritize environmental issues when they return to Albany.

Some even floated raising taxes on the wealthy to foot the bill. Horner said advocates are working to estimate how much that increase should be, and to have more conversations with Gov. Kathy Hochul by the end of the year.

People of color and those who live in low-income areas are more likely to live and work in places with higher levels of greenhouse gases, chemicals and pollutants and less access to clean water.

"I'm sick of people who look like me, people who grew up where I grew up, being on the receiving end of bad policy and greed, breathing polluted air, drinking tainted water and being exposed to toxic fields and chemicals, giving our babies asthma and our elders cancer, destroying our ecosystem and killing off the little biodiversity we have," said Tabetha Wilson, a resident of Albany's South End who spoke Wednesday.

Steck has long fought for climate justice and related funding in the state budget.

He says several of his colleagues support climate measures on the surface, but few are serious about action.

The Democrat said he's ready to discuss the urgency with colleagues in his own party and across the aisle, after Republicans flipped several seats in the Legislature in last week's election.

"The idea that we can't be doing any new initiatives on climate, I think that's a mistake," Steck said.

The state’s economic future is uncertain amid high inflation and a potential downturn, giving lawmakers and New Yorkers pause at the hefty bill of addressing climate change.

Steck argues it's an issue that should be properly addressed and funded in the next budget.

"Before you talk about taxes, you have to see what the total package is," he said. "And it's a little premature to say what's the best way to get to the end goal?"

​Businesses in the fossil fuel industry saw some of their greatest profits during pandemic, with Chevron and ExxonMobil seeing combined profits for the first quarter of 2022 of over $11.8 billion while charging incredibly high prices and not accepting responsibility of high costs paid by taxpayers.