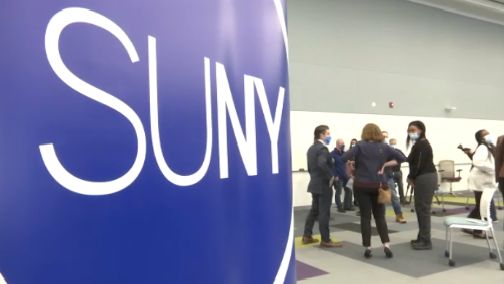 State University of New York programming, staff and services could face steep cuts across its 64 public campuses without higher state funding to help offset multimillion-dollar budget gaps expected at most of its upstate facilities.

Many SUNY campuses are estimating their budgets will be millions of dollars short next year after a state history of underfunding higher education, declining enrollment, high inflation and hardships from the COVID-19 pandemic as one-time federal coronavirus aid runs out.

"Now, as the federal money, you know, will run out, now it's time for the state to pick up its responsibility to take care of these institutions so that the mission can be performed," United University Professions President Frederick Kowal said.

SUNY Oneonta is expected to have a deficit just under $2 million, with SUNY Fredonia grappling with a gap as high as $16 million, according to UUP.

"If there isn't a commitment to invest in the institutions that need the resources ... campuses will suffer, programs will be eliminated," Kowal said. "Eventually, if we don't turn the corner, campuses will suffer to the extent where it would be inevitable where campuses could not survive financially."

Campuses reported their projected budget shortfall range to United University Professions. This list shows the high end of those estimates:

Gov. Kathy Hochul and state leaders made historic investments in SUNY in the latest budget this past spring, with a $300 million increase in funds, $53 million to hire new faculty, a 15% increase for Educational Opportunity Programs and an expansion of the Tuition Assistance Program to include part-time students, according to SUNY.

“The most recently enacted state budget included the most significant investment in higher education in a generation," according to a statement from a spokesperson with Gov. Hochul's office. "SUNY alone is receiving about a $300 million increase in operating aid and $660 million in new capital, which will enable campuses to construct state-of-the-art classrooms, as well as research and lab space and continue to fulfill its mission to provide an affordable, high-quality, academic experience for all students. This significant funding supports the Governor’s vision to secure SUNY’s place as a global leader in higher education and workforce development, and — most importantly — includes unprecedented funding to support students, campuses, faculty and researchers across all public colleges and universities.”

Kowal says SUNY was grateful for the extra funds, and shows the institutions have Hochul's support, but it doesn't overcome 15 years of underfunding.

SUNY's union is not asking for a specific increase this early in budget discussions, which will not officially begin until the Legislature returns in January.

"While we've done so much better on K-12 and invested billions, it's really time now that we look at higher ed and start to give more parity there and invest for the future," said Fahy, a member of the Higher Education Committee.

Campuses with a focus on technology or programming that rely on in-person instruction are seeing larger budget holes.

UUP leadership will speak with union members, PSC-CUNY members and New York State United Teachers to come up with a specific number and proposal to share with SUNY administration and the governor's office later this fall.

Staff at some SUNY campuses in various regions estimated the increase would have to be tens of millions of dollars.

"We've always prided ourselves here in New York by investing in our human capital, and it is that human capital," Fahy said. "It's those investments that will continue to, I think, pay dividends."