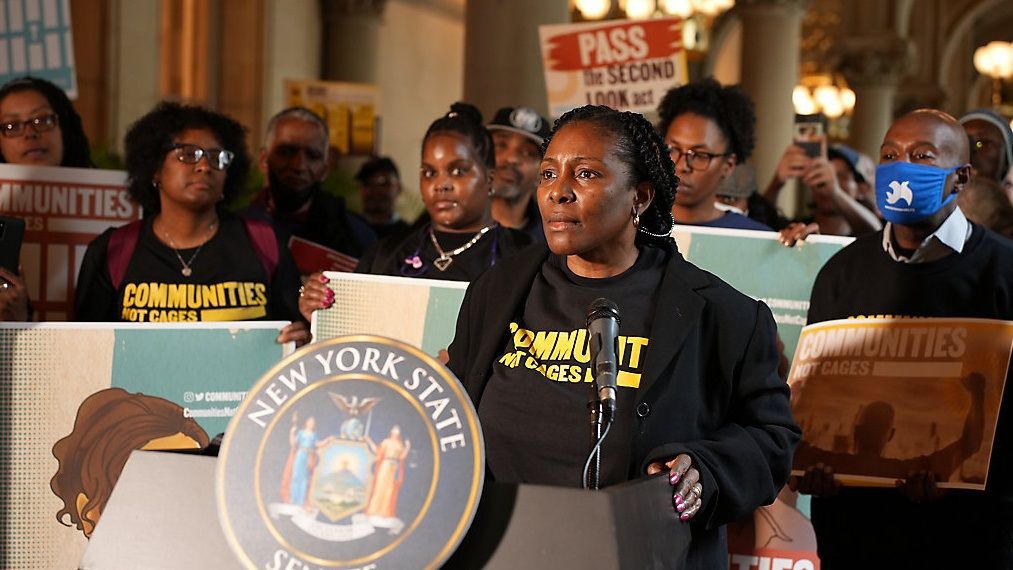 The legislative session won't begin until January, but activists are beginning their push on three bills to eliminate mandatory minimum sentences and create more opportunities for incarcerated people to be considered for release.

Advocates will rally in New York City next week on the 28th anniversary of the signing of the 1994 Crime Bill signed by then-President Bill Clinton. The measure incentivized expansions to prisons and jails and imposed harsher criminal sentences — fueling a legacy of mass incarceration in the state and nation.

"It's extremely important to make a system of corrections truly about corrections," said Assemblywoman Anna Kelles, a Democrat from Ithaca.

Kelles sponsors the Earned Time Act, allowing people in prison to reduce their sentences with good behavior, programming or other rehabilitation.

"We have systems in place that promote rehabilitation that will promote transformation and will help someone re-enter into society, into the community and into their family in a healthy way and set them up for success," she added. "That is the point of corrections."

David Delancy, of the Bronx, spent two decades behind bars in maximum and medium-security facilities in Connecticut and New York and says the current carceral system leaves a person in prison feeling hopeless and discourages rehabilitation.

"If I gotta wait 10 years if I do the right thing, if I make the changes and it could actually be seven years instead of 10, that gives a person something to push for," said Delancy, coordinator for the New York County Re-entry Task Force Service. "And it doesn't take away from our criminal justice system — it enhances it."

Activists on Tuesday will also march urging lawmakers to pass the Second Look Act that allows people in prison to apply for a sentence reduction, and a proposal that eliminates mandatory minimum criminal sentences.

Delancy says the bills would encourage incarcerated people to do the work and change themselves to reduce their sentences.

"It didn't take me 20 years to decide that I wanted to turn my life around...that I didn't want this type of life to be mine," he said.

The measures died in committee this session. Kelles says the deep politicization of the state's bail reform laws has prevented other criminal justice reforms to take hold.

"If we really, really want to reduce crime, we're having the wrong conversation," she said.

She's hopeful conversations to garner support for sentencing reform will take place next year after the November elections, adding the proposed laws will give people in prison greater accessibility to programs that promote transformation.

Delancy says the measures would have helped him be released from prison and return to his community sooner if they were in place while he was incarcerated.

"...God says 'Forgive — I forgive you for yourself, come back to me,'" Delancy added. "We're the only people that says 'You know what? You messed up in our society, and we don't want nothing to do with you, and in fact, we're going to hold you accountable for the rest of your life.' If we're a real rehabilitative system... we have the opportunity to change, if we're willing to say that we really want to stand for what we stand for."

Neither the Assembly nor Senate Democrats returned requests for comment Friday about their conferences' support for any of the proposals.​