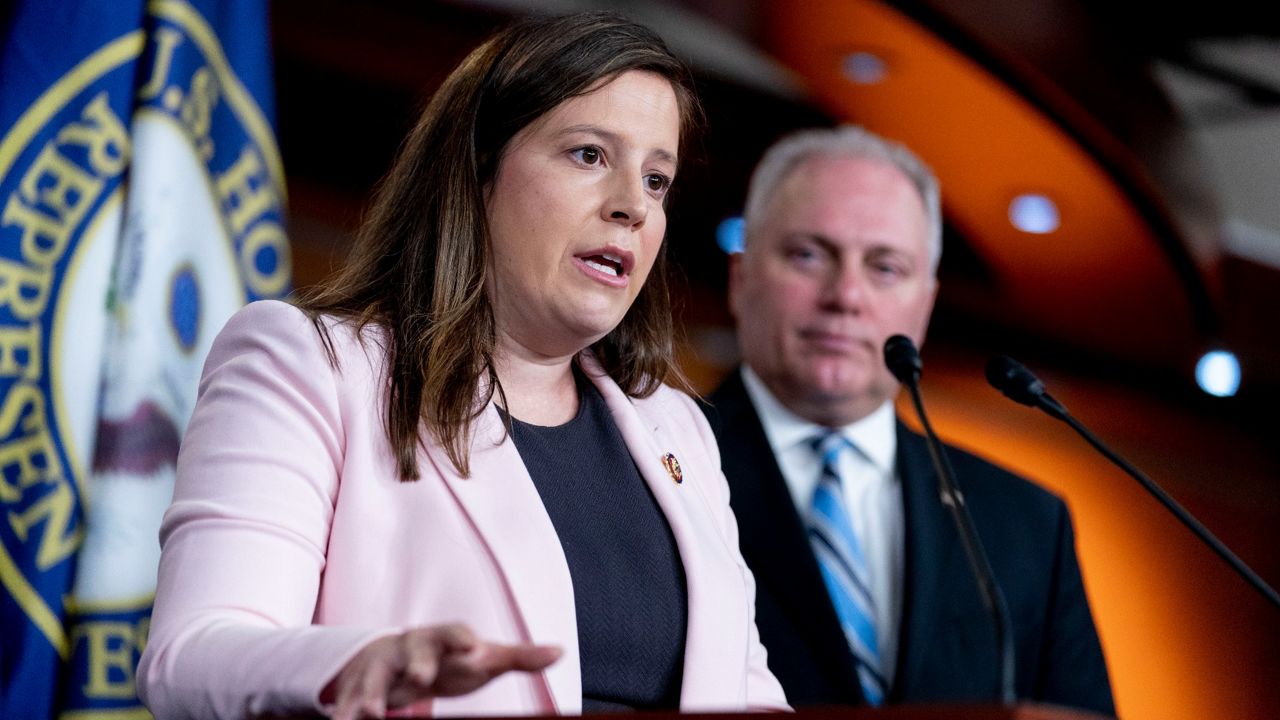 Path to Power: The inside story on Elise Stefanik's rise from GOP backbencher to leadership

U.S. Rep. Elise Stefanik is back on the campaign trail, ahead of what could be the most consequential election yet for the 38-year-old Republican.

In just a few short years, Stefanik has experienced a meteoric rise to power on Capitol Hill, fueled by her embrace of former President Donald Trump.

Last year, the congresswoman’s colleagues elected her House GOP Conference Chair — the third-ranking Republican in the House of Representatives. If the GOP wins control of the House in this fall’s midterms, Stefanik’s influence in the majority-dominated chamber stands to grow even more.

Her rapid rise and staunch support of Trump has won Stefanik new fans as well as critics. Among her detractors are some of her colleagues who joined Congress alongside her in 2015, who argue that they no longer recognize her.

Stefanik first won her seat in New York's 21st Congressional District in 2014, becoming at the time the youngest woman ever elected to Congress.

She had establishment credentials: a Harvard graduate, she worked in the George W. Bush White House and helped prepare U.S. Rep. Paul Ryan for the 2012 vice presidential debate.

But she ran in 2014 as a fresh voice. She, for example, shunned an anti-tax pledge, signed by many Republicans.

“I would be an independent voice on behalf of this district,” she said at a Spectrum News primary debate that year.

Once on Capitol Hill, she carved her own path, repeatedly ranking among the most bipartisan lawmakers, according to the Lugar Center, and co-chairing the moderate Tuesday Group.

“Very bright, very personable,” said North Carolina Republican Rep. David Rouzer. “I anticipated that she probably would be conference chair or some other leadership post, if she so desired it.”

Massachusetts Rep. Seth Moulton, a Democrat who entered Congress the same year as Stefanik and worked alongside her on the House Armed Services Committee, said she was a friend.

MOULTON: I had a genuine partner on the other side of the aisle.

Q: When did that start to change?

The two teamed up in 2018 on legislation demanding more transparency from media outlets owned by foreign governments.

“I had a genuine partner on the other side of the aisle that I felt like I could sit down and have a conversation with. Someone who was willing to listen, and maybe even change her mind. Someone who would hear me out and try to change my mind, too,” Moulton said of Stefanik.

Asked when that started to change, Moulton said, “With Donald Trump.”

In 2016, Stefanik kept then-candidate Trump at arm’s length, ducking Spectrum News’ questions about which candidate she supported for president, even just days before the New York primary.

“I’m focused 100% on doing my job representing this district. I believe our next president needs to be a strong commander in chief,” she told Spectrum News in April 2016.

Trump, of course, went on to become the GOP nominee, and Stefanik said she would vote for him.

Still, she repeatedly criticized Trump, blasting his attacks on Gold Star parents, calling his comments about groping women on the "Access Hollywood" tape “just wrong" and even dismissing his idea for a wall along the southern border.

Once he took office, Stefanik voted with Trump just 77.7% of the time, according to an analysis by FiveThirtyEight.com.

But her distance was eventually replaced by an embrace, with Trump’s first impeachment as a turning point.

As a member of the Democrat-led committee investigating Trump in 2019, Stefanik repeatedly defended him.

By the next year, she had scored a prime speaking spot at Trump’s re-nominating convention.

And in January 2021, she was among the House Republicans to reject electoral votes for Joe Biden from Pennsylvania in the hours after the U.S. Capitol attack.

Democratic colleagues who joined Congress alongside Stefanik in 2015 said they are stunned and saddened to see how the congresswoman has, in their view, changed.

“She’s turned into a mouthpiece for Donald Trump. I’ve never seen an evolution quite like that,” she continued.

“Good on her, rising up through the ranks, but at what cost? Her values, the republic, the Constitution and still on that list – but very important to me – our friendship,” he said.

Asked about such criticism from colleagues across the aisle, Stefanik pushed back, dismissing Rice as someone who is retiring from Congress and labeling Moulton a “failed presidential candidate.” 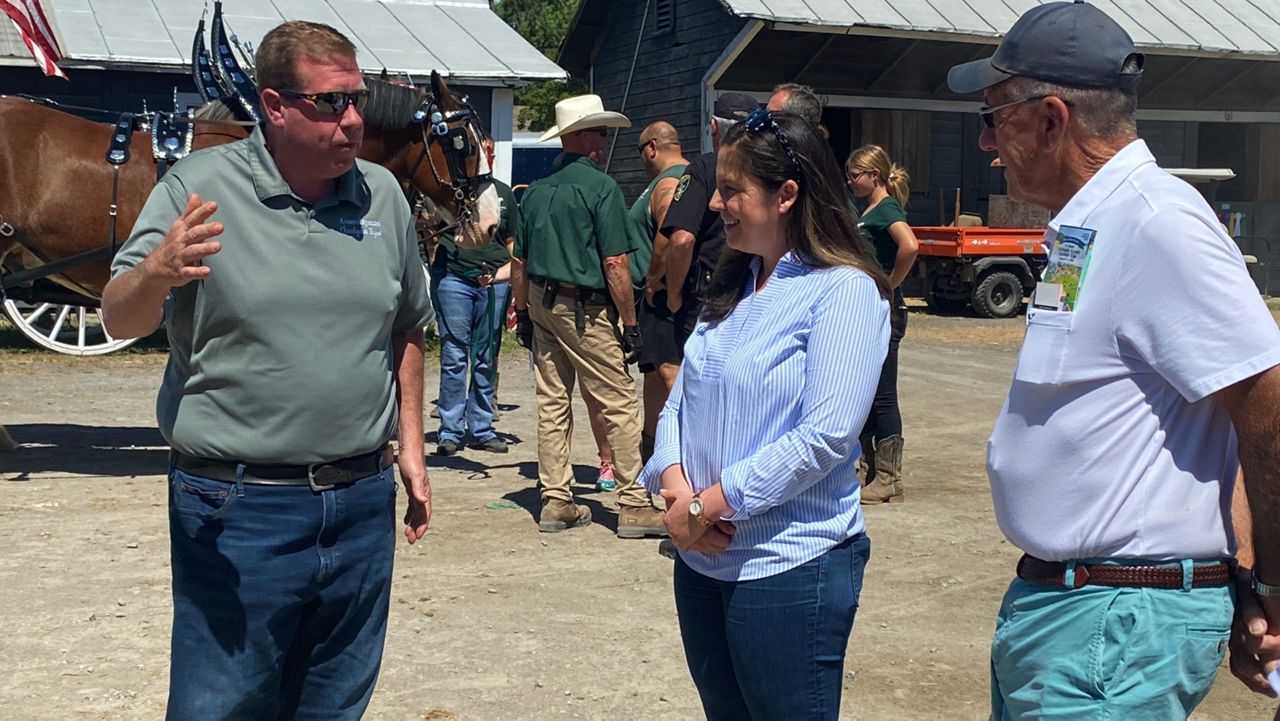 And it is for those very constituents, she says, that she is better able to serve in her leadership post — a role that gives her more clout to bring home results.

As to whether she has chosen ambition over her values, Stefanik said, “I’ve chosen my values, and I've chosen my constituents.”

“The American people in my constituents are smart. They see the issues. They see how hard I work for this district. They also see the results I've been able to deliver,” she said.