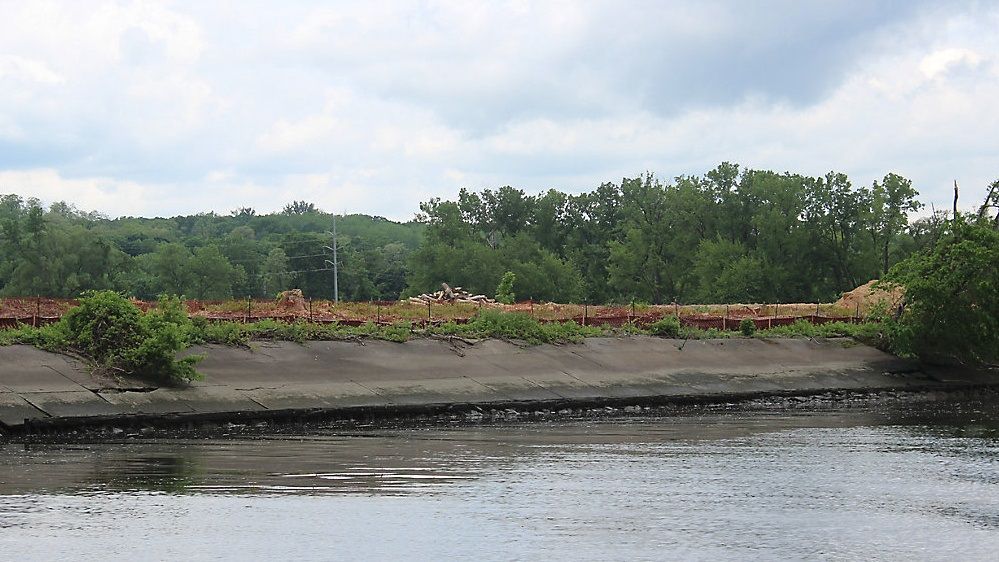 A $29.5 million federal grant to help build the nation's first offshore wind facility at the Port of Albany is in jeopardy after 80 acres of trees were cleared without port officials completing a required federal review.

All work has stopped after contractors improperly cleared trees on the port's 80-acre site, slated to include a wharf, a new bridge and internal roadways and four buildings, without starting the U.S. Environmental Protection Agency's review process mandated under the National Environmental Policy Act, EPA spokesman Elías Rodríguez said.

"EPA has not received any NEPA documents pertaining to this project to date," Rodríguez said Friday. "Should any NEPA documents be issued in the future, EPA will review them in accordance with our responsibilities under Section 309 of the Clean Air Act."

The $357 million project, set to create 500 jobs, will receive $40 million from the state Energy Research and Development Authority and the $29.5 million if the federal award is not rescinded.

"MARAD has been made aware of the situation and is examining the possibility of remedial action," said a spokesperson with the U.S. Maritime Administration, which oversees the grant and proper procedures. "MARAD continues to review the situation. No decisions have been made and there is no set decision date."

The port has not received any payment of the $29.5 million award.

"Sen. Schumer is hopeful that the Port of Albany and DOT can move this important clean energy project forward," Schumer spokeswoman Allison Biasotti said in a statement Friday.

Similarly, a spokeswoman for Sen. Kirsten Gillibrand, D-N.Y., said "Sen. Gillibrand is monitoring the situation and hopes that MARAD and the Port can achieve an outcome that is in the best interest of all sides."

The state Department of Environmental Conservation said the Port of Albany has two million tons of fly ash, or a byproduct of burned coal, that was dumped on the site before 1970.

"...Potential impacts associated from on-site drainage as it may relate to fly ash draining into the Hudson River and Normans Kill shall be addressed," according to a 2019 draft scoping plan by Bethlehem town planners for a Port of Albany expansion project.

It's unclear if the improper tree removal disturbed ash-contaminated soil that could drain into the adjacent local waterways.​

"I don't know what the failure is here, but it's a massive failure," said John Lipscomb, Riverkeeper vice president and patrol boat captain.

Lipscomb sailed past the construction site on May 28 and was shocked to see the area riparian buffer, or vegetation along a water's edge, mowed down to nothing along the Hudson River and Normans Kill.

"We don't know where the fault lies, but that kind of scorched-earth clearing isn't necessary," Lipscomb said. "They're not going to build wind turbines on the very bank of the Normans Kill. They don't need to take down every tree. No one can convince me of that."

City of Albany Mayor Kathy Sheehan, who nominates most members of the port commission, did not return multiple requests for comment.

Albany County Executive Dan McCoy's office is urging the department and port officials to come to an agreement and not jeopardize the nation's largest off-shore wind project slated for the county.

"The future is now and now is renewable energy," said Mary Rozak, McCoy's spokeswoman. "Regardless of what happened, we believe there should be a way to remedy it so we can move forward and do what needs to be done."​

The port receives and handles all funding for the offshore wind project.

State and federal environmental regulations are in place for a reason, Lipscomb said, noting the young nests of various species and migrating aquatic life this time of year.

"We are concerned that these climate-related projects, because society wants them so much, are going to be held to a looser standard, and that's not OK," he said. "We can't worry about the global environment at the expense of our own. We are the custodians of the Hudson Valley and we can't hurt the Hudson Valley in the name of mitigating climate change."

Work continues to be paused as the Maritime Division's review remains pending.

In the meantime, Riverkeeper will be contacting legal counsel.

"Gov. Hochul supports this offshore wind manufacturing facility, which is vital to the region’s economy and the state’s ambitious climate goals," Gov. Hochul spokesman Leo Rosales said Friday. "The state understands the Port of Albany has been working to resolve these issues and advance construction appropriately."

The state Department of Environmental Conservation authorized the port for limited construction activities, including tree clearing, on the site March 30 when the department approved the project's SPDES General Permit for Construction Activities.

"No other permits or approvals have been issued by DEC to date," according to a statement from the department. "DEC is closely monitoring work related to the DEC permits and approvals for this project."