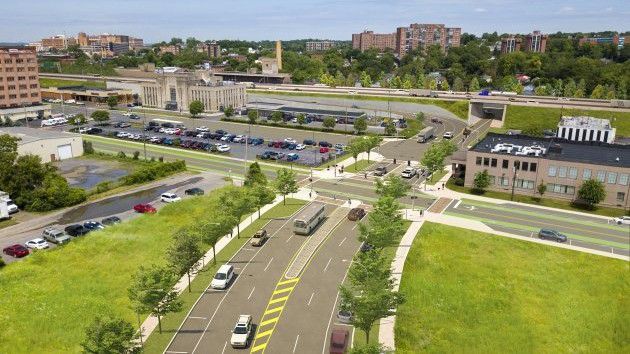 Rendering provided by the NYSDOT

With I-81 draft environmental statement out, what’s next for the 15th Ward?

Earlier this week, state Assembly Transportation Chairman Bill Magnarelli told Capital Tonight that after reviewing the DEIS, it appeared that the people of Syracuse who live in the shadow of I-81, like those who reside in the Pioneer Homes public housing complex, would have to be, at least temporarily, relocated when the bridge comes down.

But the New York DOT told Capital Tonight that there are no plans to make residents move. Here is the statement DOT emailed:

"NYSDOT is not forcing residents of Pioneer Homes to move. There are no plans to temporarily displace people living in Pioneer Homes as part of the construction project.  NYSDOT is working directly with Syracuse Housing Authority and the community to mitigate impacts as they relate to the project."

This raises some questions: If I-81 is meant to fix the mistakes of the past, how exactly will families in the 15th Ward be taken care of during the months of construction?

Lanessa Chaplin, an assistant director at the New York Civil Liberties Union, said she and other activists have been involved in an awareness campaign in the impacted neighborhoods for the last three years.

“We’ve been in the community, knocking on doors, canvassing, talking to residents, hosting weekly meetings and listening sessions to try and get a better understanding of what this community’s concerns are, and what questions they have been… trying to relay to the Department of Transportation,” she told Capital Tonight.

When asked for some specific examples of the questions residents have regarding the $2 billion project, Chaplin said there were several areas of concern.

Chaplin said she and others are hoping that the city of Syracuse creates a community land trust, rather than simply deciding to sell the land to the highest bidder.

“I think one of the ways that the city could be a good partner to this community, is to listen to them when it comes to their zoning plan,” Chaplin said. “Zoning really is the policing power that says what you can and can’t do on this property. We want to make sure that the Syracuse rezone be done in such a way, that when this land becomes available, it’s zoned in a way that’s beneficial for the community.”

As for the Pioneer Homes, the hope is that appropriate measures to mitigate the impact of construction will be determined as the process moves forward.

“We also want to give community members the opportunity to relocate if they choose to,” said Chaplin.

The Federal Highway Administration and state DOT will accept comments on the I-81 DEIS document through 5 p.m. on September 14.

All substantive comments received will be summarized and responded to in the Final Design Report/Final EIS for the Project.

You may submit your comments here via the electronic comment form; by emailing NYSDOT at i81opportunities@dot.ny.gov; by sending a letter via U.S. Mail; by leaving a voicemail on the Project hotline, 1-855-I81-TALK (1-855-481-8255); or by providing it verbally at the Project’s public hearings.

Find out more about the public hearings here.