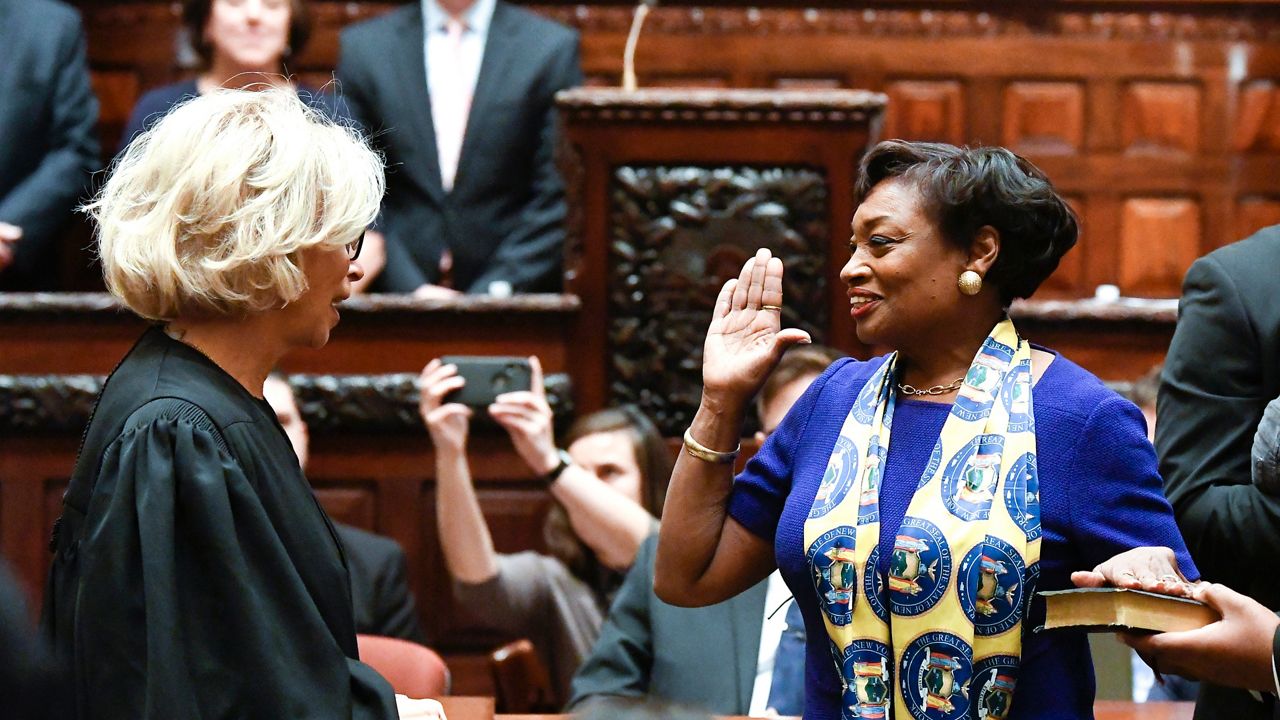 It’s a story this election cycle that has already played out numerous times across the country.

However, absentee ballots have weighed heavily in Democrats’ favor this year, helping them to slowly gain ground across the state when results were finally tallied.

So on Monday, state Senate Democrats triumphantly declared that they will be walking into Senate chambers next year with a supermajority for the first time in history.

“I’m announcing that in 2021, we will begin our session with a historic supermajority,” Senate Majority Leader Andrea Stewart-Cousins said. “And it will also be the biggest Senate majority conference in the history of New York state.”

At this point, Senate Democrats have definitively secured 41 seats and feel confident enough in their lead in the 40th Senate District race to put them over the edge to 42 members.

This race, along with two other races, Senate District 42 and 50, have not yet been officially called.

But Democrats said that Senator Pete Harckham will be declared the winner over Republican challenger Rob Astorino on Tuesday at the latest.

“On election night, many wrote us off,” Stewart-Cousins commented. “They said it was a big red wave and they were already predicting our shrinking majority. And as we know, the red wave turned out to really be more of a red mirage.”

The day after the election, Senate Republican Minority Leader Rob Ortt held a press conference touting early Republican leads, saying at the time, "What you saw last night was a repudiation of one-party rule. It was repudiation. There’s no other way to slice it. In a blue state where President Biden won, where you have record turnout, Republicans picked up seats last night.”

A Senate Democratic supermajority tips the scales of power in several ways.

Democrats will now have the ability to override any vetoes that Governor Andrew Cuomo issues and be in charge of redrawing district lines.

A few more moderate Democrats could have the option to not always vote on party lines.

And this also means the Democratic Party is expanding geographically as well, allowing upstate members to hold more influence.

However, Governor Cuomo cast doubt on how much power this supermajority will wield.

“The way the state government really works is through the budget,” Governor Cuomo said. “All of the main things are done in the budget. Supermajority or not, it doesn’t really make a difference.”

When asked if the Senate Democrats will challenge Cuomo on any of his policies, Stewart-Cousins said "we generally agree, so I don’t see that this would be an issue. But it certainly is a potential.”

.@AndreaSCousins says they are “considering” holding session next month. “Nothing is off the table”

Cuomo and state Democratic Party Chairman Jay Jacobs both offered up warnings to the state Democrats after the election, saying they needed to tone down their “progressive rhetoric.”

Deputy Senate Majority Leader Mike Gianaris took a moment on Monday to address these comments, saying "a message was sent by the voters. Let’s be clear about that. Let’s be clear about something else. The Republicans did not beat the Democrats on the messaging as some have said. Obviously, they took their best shot."

Senate Minority Leader Rob Ortt sent a statement in response to this press conference, writing “our sitting members and candidates competed in every area of the state. They ran on a message that resonated with voters who chose to reject the radical agenda of Albany Democrats. They will be an even louder voice. If New Yorkers thought One-Party Control was bad, more Democrats in the New York State Senate will usher in a new era of radical, increasingly socialist policies, unlike anything before seen in this state.”

State Democrats still have an uphill battle before them this next legislative session, with a looming budget deficit that has been pushed down the road in hopes of another federal stimulus package.

Stewart-Cousins acknowledged that they will not be able to wait forever on this, not ruling out any potential revenue raisers such as legalizing recreational marijuana, increased taxes, and mobile sports betting.