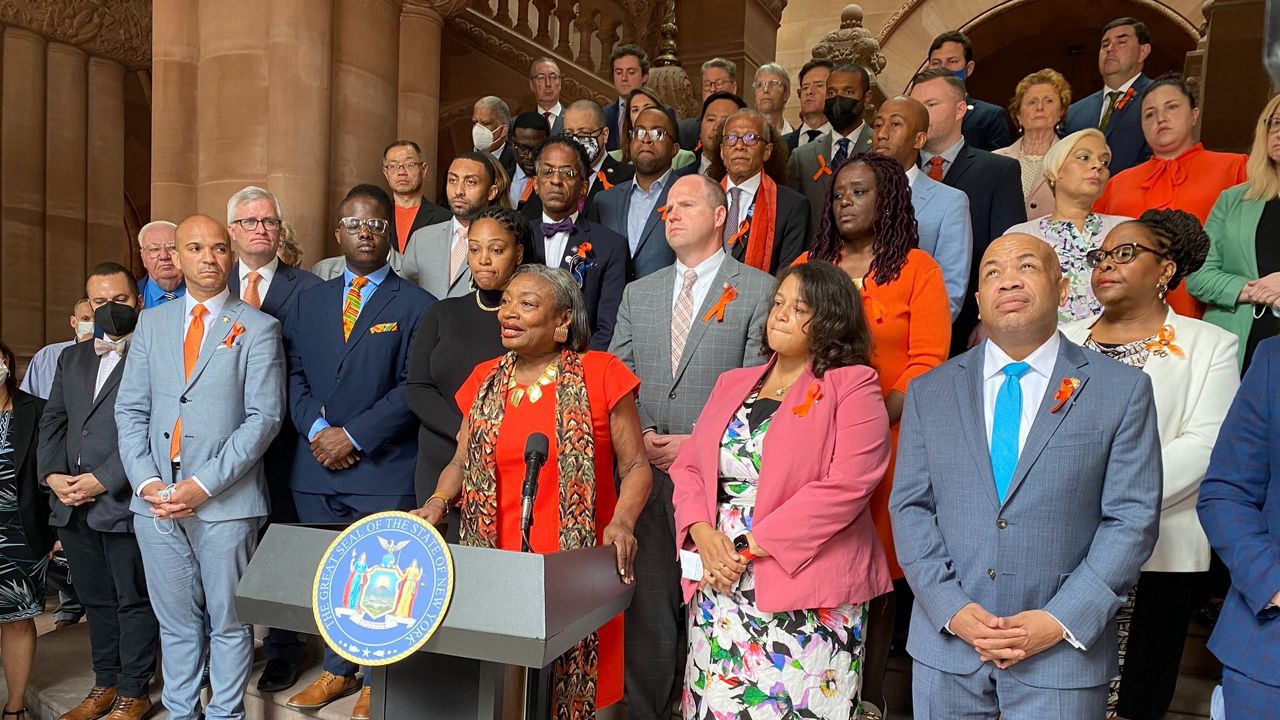 New York Democratic lawmakers on Monday decried the proliferation of hate and racism on the internet and the availability of guns in the United States, even in a state with stringent gun control laws.

They called for action on the national level, vowing to pressure President Joe Biden to do something. But at the same time, lawmakers were not yet sure which direction the legislative response to the mass shooting in Buffalo would take.

"It's unacceptable, but we also need to address this problem," state Assembly Speaker Carl Heastie said at a rally with members of the Black, Puerto Rican, Hispanic, and Asian Legislative Caucus. "This country's insane obsession with guns and assault weapons needs to be talked about. You want to have a gun to protect your house or your family or your property, fine. But what the hell do we have military weapons in the hands of civilians?"

Heastie, speaking at the rally in which emotions were still raw, pledged to speak to Biden about the issue when he travels to Buffalo on Tuesday.

"If I see the president when I got to Buffalo tommorrow, I'm going to say that to him," he said.

Sen. Tim Kennedy’s staffer’s son was shot at Tops on Saturday: “we have to do better as a nation.” pic.twitter.com/h5WzRTT0fM

It's been only three days since the shooting left 10 people dead and three injured at a Tops supermarket. Law enforcement officials have said the gun used in the shooting, an AR-15, was legally purchased. But the high capacity magazine used is illegal under state law.

At the same time, the alleged shooter, Payton Grendon, had been known to State Police after he reportedly threatened his high school last year.

Gov. Kathy Hochul has indicated she wants more scrutiny for social media companies, as well as closing what she called loopholes in the current gun laws in New York to address access to firearms. She had planned to call for a package of gun-related measures on Tuesday, even before the shooting in Buffalo.

Hochul will likely find a receptive audience to the changes in the state Legislature, where Democrats control both chambers.

"I'm sure in these waning weeks we will come together," Senate Majority Leader Andrea Stewart-Cousins said. "If there's things we've missed, we need to be able to tighten those loopholes."

Senate Majority Leader Andrea Stewart-Cousins: “We’re in a place where all of us have to work together to raise the consciousness to understand we’re not coming for anyone’s gun, but after a while the guns are coming for us.” pic.twitter.com/QDrfyndaXc

Lawmakers nearly a decade ago approved a package of measures in response to another mass shooting at an elementary school in Connecticut. In the years since the SAFE Act was approved, officials in New York have focused more on the flow of illegal guns into New York. In recent years, they have also approved measures meant to curtail the use of untraceable guns as well as firearms that can be assembled from parts using a 3-D printer.

Alongside the gun control conversation will also likely feature efforts to stem the tide of racism on social media. The shooter allegedly livestreamed the massacre online before the platform Twitch dropped it. Hochul has said she plans to speak with social media companies about the ease of spreading and inciting racist violence on their platforms.

"I think the largest conversation is this atmosphere that is pervasive in this society. People talking about fear and replacement and just an environment that has really frankly gone viral as it relates to hatred," Stewart-Cousins said. "I think all of us have to figure out a way to say enough is enough."

Stewart-Cousins suggested the social media efforts would have to be addressed on the federal level. And she wondered why the police did not do more to prevent the shooting after first being alerted last year.

"Obviously this is something hopefully on a federal level we are taking very, very seriously. There's free speech and then there's this incitement," she said. "What is law enforcement doing when people are putting up manifestos about killing people? I don't know, apparently not enough."

Republicans, meanwhile, have called for improving the mental health system. Candidate for governor Rob Astorino on Monday said new gun control measures at any level would only effect law-abiding owners.

"Should we not allow people to drive because some lunatic in Milwaukee drove through a crowd of people?" he said. "There are legal gun owners in this country who have been almost victimized and criminalized for having the right to own a gun as I do. This guy obviously fell through the cracks."