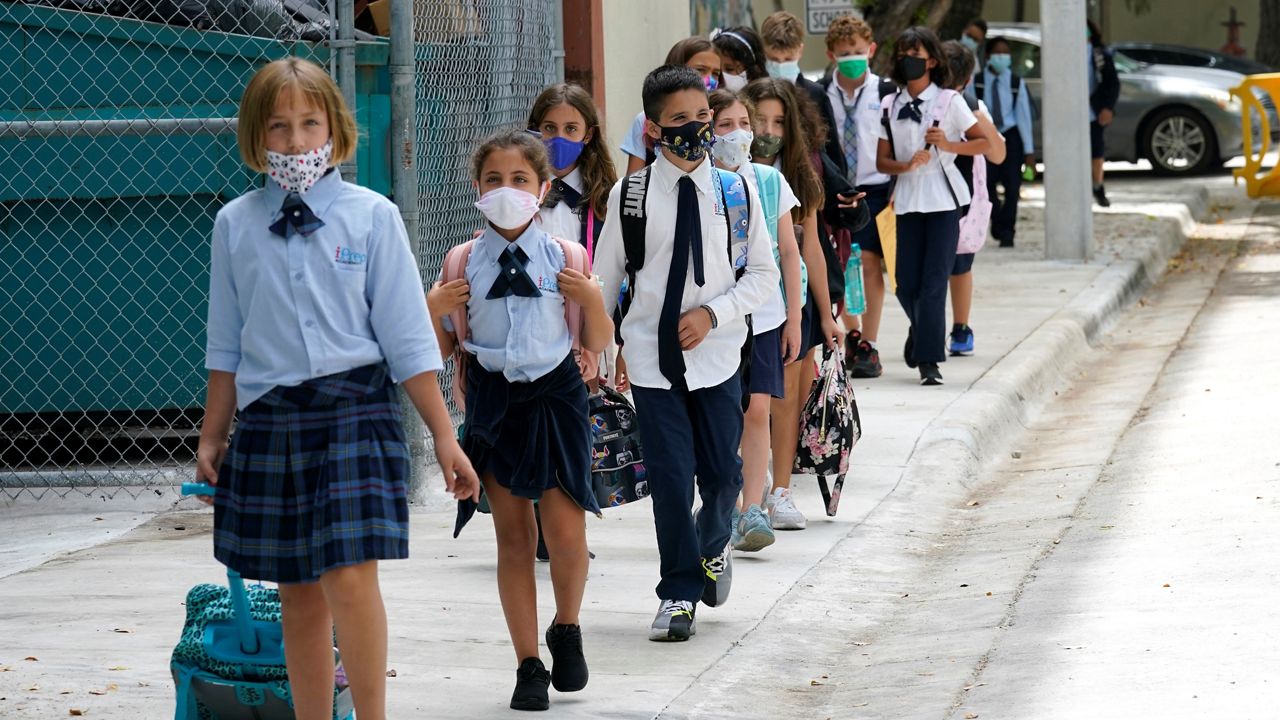 A majority of New Yorkers want the state to wait for more information before the Hochul administration decides whether to lift a mandate on mask-wearing in schools statewide, a Siena College poll released Tuesday morning found.

At the same time, the poll showed voters' rising anxiety about crime and public safety and a desire to move forward from the COVID-19 pandemic after nearly two years of public restrictions and a surge in cases this winter.

And there is growing discontent among New Yorkers with the direction both the state and country are taking, according to the survey.

The poll found 58% of voters surveyed support Gov. Kathy Hochul's plan to keep the mask mandate in place, which she has said will be based on a variety of factors, including hospitalizations, new COVID-19 case counts and vaccination rates. The poll found 30% of voters believe the mask rule should have ended by now and 10% want to see it conclude after the current February break.

The numbers reflect what has become a deeply passionate debate over mask-wearing in schools nearly two years into the public health crisis and as state officials have more broadly relaxed COVID-19 restrictions put in place amid the surge of the highly contagious omicron variant of the virus.

There remains a deep partisan divide over the issue, the poll found: 74% of Democratic voters support Hochul's plan to keep the mask mandate in place until at least early March; only 30% of Republicans back the move. Independent voters are split — 54% in favor, 44% want it to end next week or believe it should have ended already.

Lawmakers in both parties have called for clearer metrics on how the mask mandate would conclude. Hochul, so far, has said she is basing the decision on a number of factors, including whether a new variant emerges in the coming weeks.

New York has seen a steady decline in new COVID-19 cases over the last several weeks along with hospitalizations. The development led New York and other northeastern states to relax mask rules indoors for businesses. Mask rules remain in effect for public transportation, prisons, health care facilities and homeless shelters.

A plurality of voters, 45%, say the mask mandate should still be in place for indoor spaces in New York, while 20% believe last week was the right time to end the mandate and 31% wanted it to end earlier.

And 57% of voters polled are concerned they could be a victim of a crime.

The poll comes amid a rise in violent crimes in New York and across the country. State officials, including Hochul and Democratic members of the Legislature, have called for increased efforts to address shootings and the flow of illegal guns into the state. But Republicans, as well as some Democratic officials, have said New York's bail laws need to be re-examined after cash bail requirements largely ended for many criminal charges.

Allowing judges to consider a "dangerousness" standard when determining whether a person charged with a crime should be remanded draws support from 65% of voters. Only 27% of voters agreed with the statement the standard would unfairly impact people of color. Support for the dangerousness standard is seen across the state and political spectrum, including 56% of Democrats, 61% of independents and 61% of New York City voters.

Black voters, however, are more narrowly divided: 44% support the change; 40% do not.

The debate surrounding the state's cashless bail law remains one of the more heated discussions in Albany as violent crime has risen in the state as well as across the country.

Top Democratic leaders in the state Assembly and Senate have been resistant to making broad changes like adding the dangerousness standard.

Data from the state court system has shown about 3% of people arrested and released in the last year go on to be re-arrested for a violent felony offense.

New York voters are not happy with the direction of the state. A plurality, 45%, believe New York is heading in the wrong direction, while 70% believe the state's fiscal condition is either fair or poor. Voters are split on President Joe Biden: 48% of voters hold a favorable view of him, 48% do not.

When it comes to the U.S. as a whole, 57% of New York voters believe the country is going in the wrong direction; only 34% say it's on the right track.

Gov. Kathy Hochul, meanwhile, holds a 46% favorable rating, with 32% of voters having an unfavorable view of her. More than a fifth of voters do not have an opinion or know enough about her.

The poll of 803 registered voters was conducted from Feb. 14 to Feb. 17. It has a margin of error of 3.9 percentage points. Crosstabs for the poll can be found here.