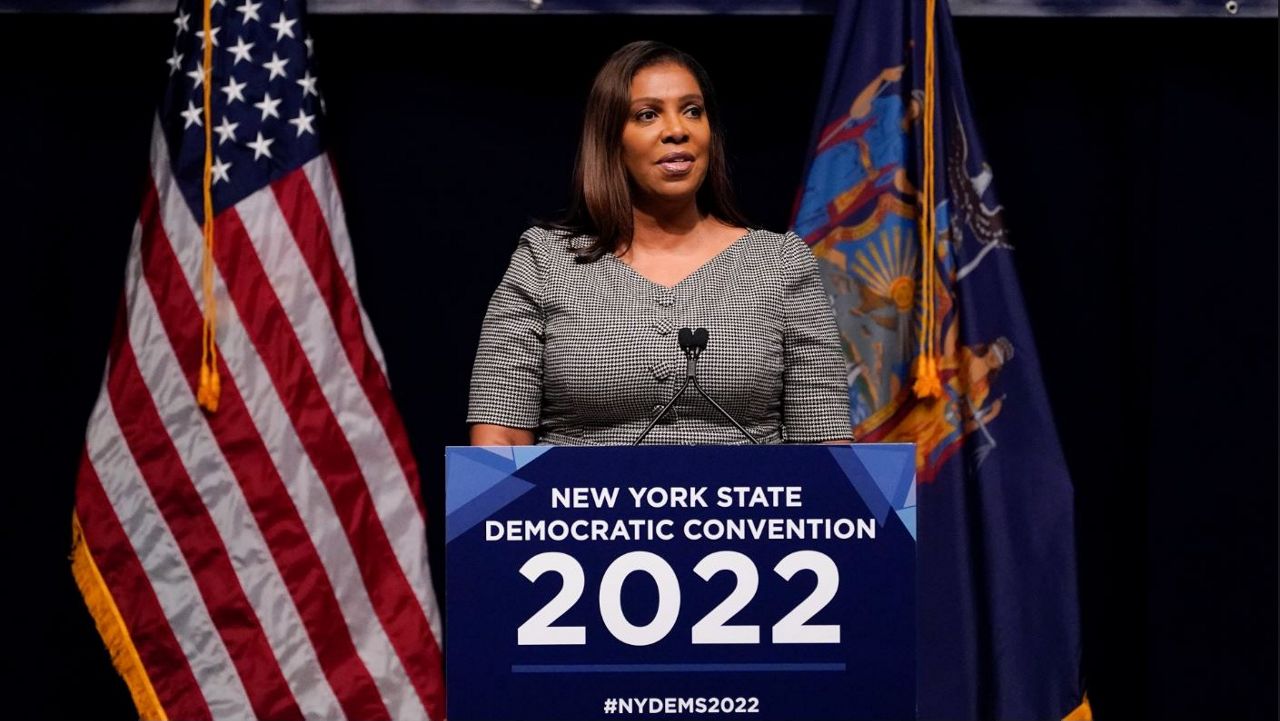 Four years ago at the Sheraton Hotel in midtown Manhattan, then-Gov. Andrew Cuomo claimed victory in his bid for a third term.

On Thursday, it was his endorsed candidate for attorney general, Letitia James, issuing him a stinging rebuke.

"It is now clear the former governor will not accept any version of these events other than his own," James told New York Democrats at the party's convention on Thursday. "To achieve that, he is now claiming the mantle of victim and disgracefully attacking anyone in his path."

As she runs for re-election, James is touting her own efforts to take on powerful figures in either party, as well as entities that are largely enathema to Democratic voters like the National Rifle Association or pharmaceutical companies that profitted from the opioid epidemic.

"Your vote of trust today is a declaration that those of us that are privileged to hold positions of public trust can make the tough decisions," she said.

Since resigning, Cuomo has become increasingly aggressive in his efforts to refute the report's conclusions that he broke the law — insisting he's done nothing wrong. Cuomo's attorney in recent weeks has said the allegations leveled against the former governor do not rise to the level of sexual harassment.

And in a statement on Thursday, Cuomo spokesman Rich Azzopardi blasted James as a "serial liar" and the report that triggered Cuomo's resignation "a sham."

"The fact is she ignored clear evidence of blackmail, perjury, inconsistent testimony and witness tampering, misused her office as a springboard for her own botched bid for governor and falsely accused the former governor violating the law only to have five separate district attorneys reject her claims," he said. "No number of speeches can paper over the fact that Tish James, Joon Kim and Anne Clark committed prosecutorial misconduct and this will now be a matter for the relevant attorney misconduct review board. We also challenge her to stop hiding and defend her report in a public forum.”

But James has staunchly defended the integrity of the report and the investigation's findings of inappropriate behavior by Cuomo.

The headlines for James go beyond the Cuomo investigation. Her probe of former President Donald Trump's business interests has led a court to rule Thursday the former president and two of his children must testify.

For supporters like state Democratic Vice Chair Christine Quinn, it's an example of how James isn't afraid to investigate powerful people.

"Tish is killing it as the attorney general — whether it's being Donald Trump's worst nightmare or holding former Gov. Cuomo accountable," she said.

James dropped her bid for governor in December and opted instead to run for re-election. Westchester County Executive George Latimer, who had endorsed James for governor, calls it the right move.

"She has skills to do many things," Latimer said. "She's in the middle of an important prosecution right now. You don't want to leave in the middle and turn it over."