Antonio Delgado came into his first term in Congress flipping his district from red to blue. Since then, he has developed a reputation on Capitol Hill for being a moderate Democrat who will work with colleagues across the aisle. He’s been a vocal advocate for agriculture and investments in infrastructure. Delgado had three pieces of legislation passed out of the House and successfully shepherded two bills into law: a non-controversial post office renaming, and the Family Farmer Relief Act of 2019, a law designed to help financially-distressed farmers become eligible for debt relief and other resources under Chapter 12 bankruptcy. 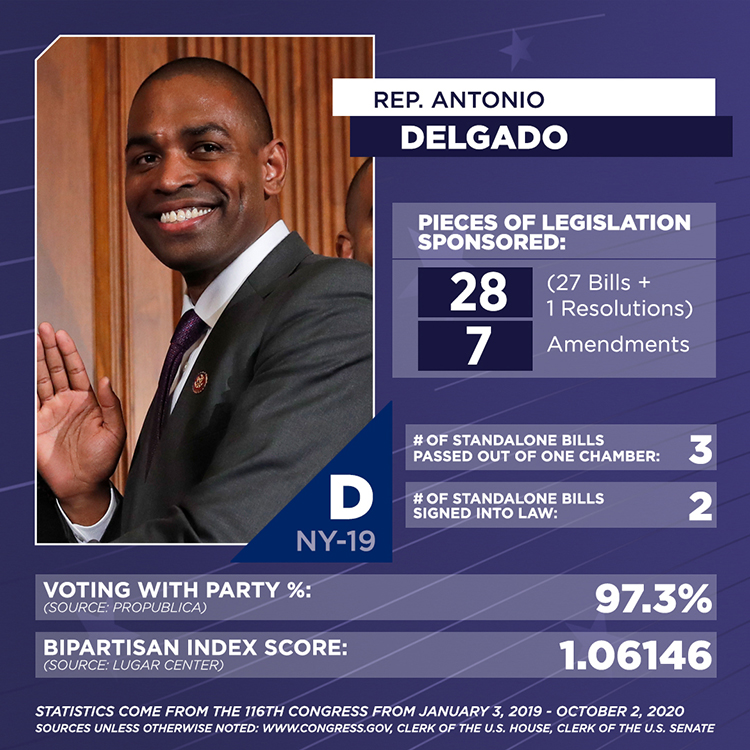 In response to this project, Rep. Antonio Delgado issued a statement. The following statements and assertions are those of a political candidate and/or congressional office. Any statistics, data, or other information contained therein has not been independently verified or checked for accuracy as part of this project:
"Legislating with members of both parties has been a top priority of mine, as evidenced by the fact that the Lugar Center Bipartisan Index - the gold standard for measuring bipartisanship in Congress - ranks me as more bipartisan than over 90% of my colleagues. Consistent with this fact, I have been endorsed by the U.S. Chamber of Commerce and am one of just twenty House members to receive the Chamber's inaugural Jefferson-Hamilton Award for Bipartisanship. My commitment to finding ways to work together has resulted in me introducing 44 bills, more than half of which are bipartisan, 18 have passed the House, and 3 have been signed into law.”