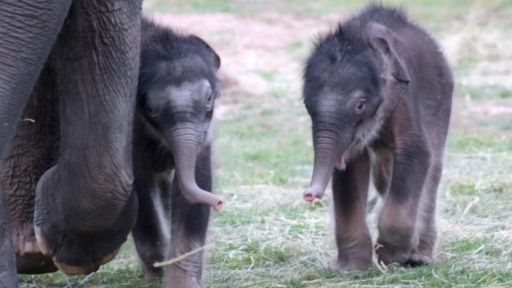 The two baby Asian elephants that we're born a little over a month ago at the Rosamond Gifford Zoo have been doing very well.

Zoo officials said it's a good time to plan a visit to see them while today is your last chance to vote to help the Zoo give the calves new names.

This was the first birth of surviving elephant twins on United States soil.  We got a look at the two brothers yesterday and they continue to grow up fast.

Zoo officials said since they were born October 24, the babies have been spending most time with their mother Mali and grandmother Targa. They've each gained about 20 to 30 pounds since birth and they've been playing a lot with each other in a private indoor area. The newborn elephants are kept indoors but brought to a window stall each day for public viewing from 11:00 a.m. to 11:30 a.m. and 2:00 p.m. and 2:30 p.m.

They've been brought outside a few times but only when the weather has cooperated. You can go to the zoo's website to vote on their names through 6:30 p.m. Thursday.

Zoo staff has been getting a ton of phone calls, letters, and gifts, while many guests have made special visits to check them out.

"We're getting calls from all over. I've gotten calls from Sri Lanka, two from India, Australia, we've got a couple folks on our staff who have worked around the world and they've been getting calls.  And, the elephant community, although there are 238 accredited zoos in the nation, it's a very tight knit group," said Rosamond Gifford Zoo Director Ted Fox.

Only three other surviving twin births have ever occurred in other parts of the world which include Sri Lanka, India, and Kenya.

We've learned that in wild elephant societies newborns typically spend most time with their mother and grandmother which would explain why they're doing just that here.

Their dad, Doc, is also at the zoo to see. The Rosamond Gifford Zoo now has a total of eight elephants that call Syracuse home.

If you head to the zoo's website you'll find you can vote for one of four name options for each elephant. The name options were chosen based on the elephant's culture.

The zoo and County Executive Ryan McMahon will announce the winning names on Friday.