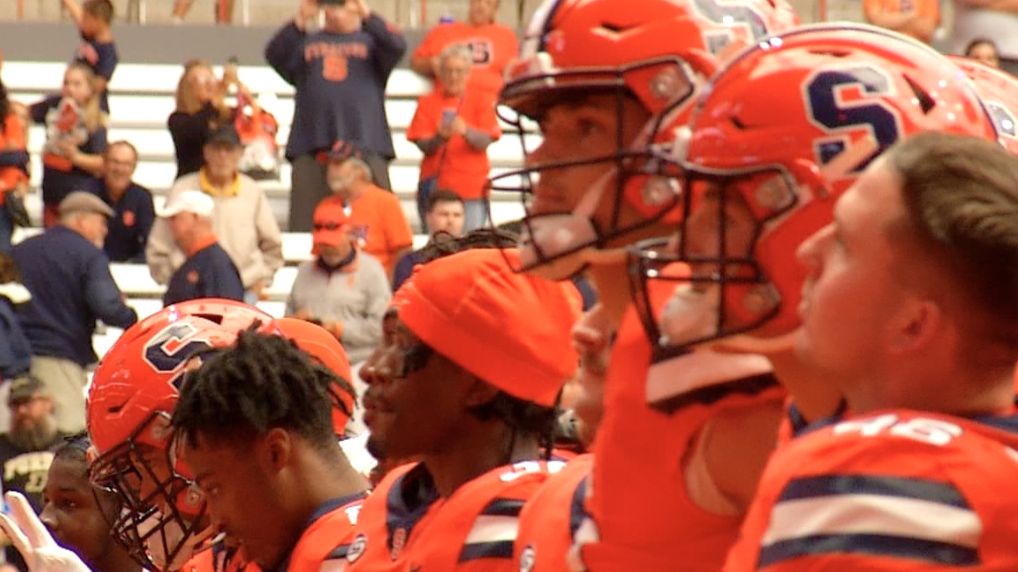 It’s all about the mindset for the Orange.

“You guys hear me say 'mob' every day, right?" Syracuse defensive lineman Caleb Okechukwu said. "I think that’s just something that we embody every day. But it starts in practice, which is what I see on game day, how we are in practice, and it’s probably even crazier in practice.”

But what exactly is the mob mentality?

“Being aggressive," Syracuse defensive back Ja'Had Carter said. "Always flying to the ball and having that mentality nobody scores on us. But it’s really good to see, not only the defensive guys, but some of the offensive guys buy into the mob mentality too. That’s keeping us together and strong, so whatever we’ve got to do to do that.”

It’s a phrase coined by Okechukwu, Carter and Marlowe Wax.

All three hail from the Washington, D.C. area. The trio have all made an impact for the Orange on the field, but are getting fans involved off the field as well by starting the Mob Podcast, which provides an inside look into the team that has had incredible success.

In a day and age when athletes' voices can be powerful tools, Carter said it’s a great way for fans to put a face behind the number and get to know who they are off the field.

“It’s a fun way for fans to see us outside the game, hear our regular voices, see how goofy we are and see how we are as a whole. And moving forward, I think it really can grow, like once we leave college. You never really know what’s going to come down the road,” Carter said.

But the focus is on the here and now. And the mob mentality is one that keeps the Orange in check every day, never letting them look too far ahead, or live in the past.

“The whole team has bought into it and that’s what we want to do each and every week, not get complacent, like you were saying earlier, and staying focused on the goal,” Okechukwu said.