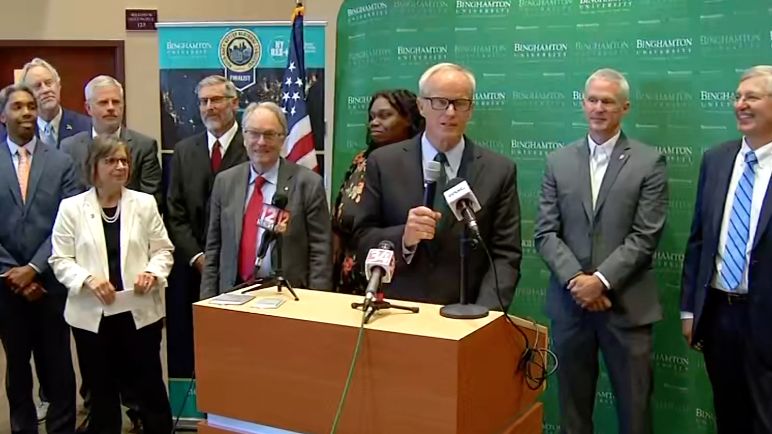 The Southern Tier has always been known for its manufacturing roots, but like many regions, jobs and factories have left the area and there hasn’t been a lot of good news, really, for decades.

Now, thanks to a $67.3 million grant and an additional $50 million from the state, the birthplace of IBM could be returning to its industrial roots.

“This is going to change Broome County. This is probably one of the most impactful things that has ever happened in Broome County,” said Broome County Executive Jason Garnar.

It's powerful statement, but one that might be hard to argue with.

Community leaders and staff at Binghamton University watched as President Biden announced the $63.7 million in funding to turn the Southern Tier into an international training and manufacturing hub for lithium-ion batteries.

It’ll make the region the first in North America to begin production of this scale in this field.

“Nine or the 10 largest lithium-ion battery manufacturers are not in the United States. They’re all in China or Japan or Korea. We have to start making them here. We have already seen the effects of the supply chain problems,” said Harvey Stegner, Binghamton University president.

The state announced an additional $50 million investment, making it one of the largest funding awards of the Build Back Better competition.

Following years of decline, the village of Endicott, known for being the birthplace of IBM, will look to return to its manufacturing roots. At the site of buildings that once employed thousands, a new workforce will begin manufacturing batteries and training companies from across the country to produce them in the U.S.

Students at BU have already begun training in the field under Nobel Prize winner Dr. Stan Whittingham, who’s known as the godfather of lithium-ion batteries. Now, a workforce of formerly laid-off manufacturing workers, along with graduates of both BU and SUNY Broome, will look to return Endicott to its glory days.

“There will be so many jobs this will generate. It’ll allow them to go from fundamental research to actually making the product, and that’s what excites people today. You can make something somebody’s going to be able to use,” said Whittingham, Nobel Prize Laureate.

There isn’t an exact start date when the manufacturing would begin, but one private company has already began producing batteries in a former IBM building.

Binghamton University was one of 20 finalists to receive an award.