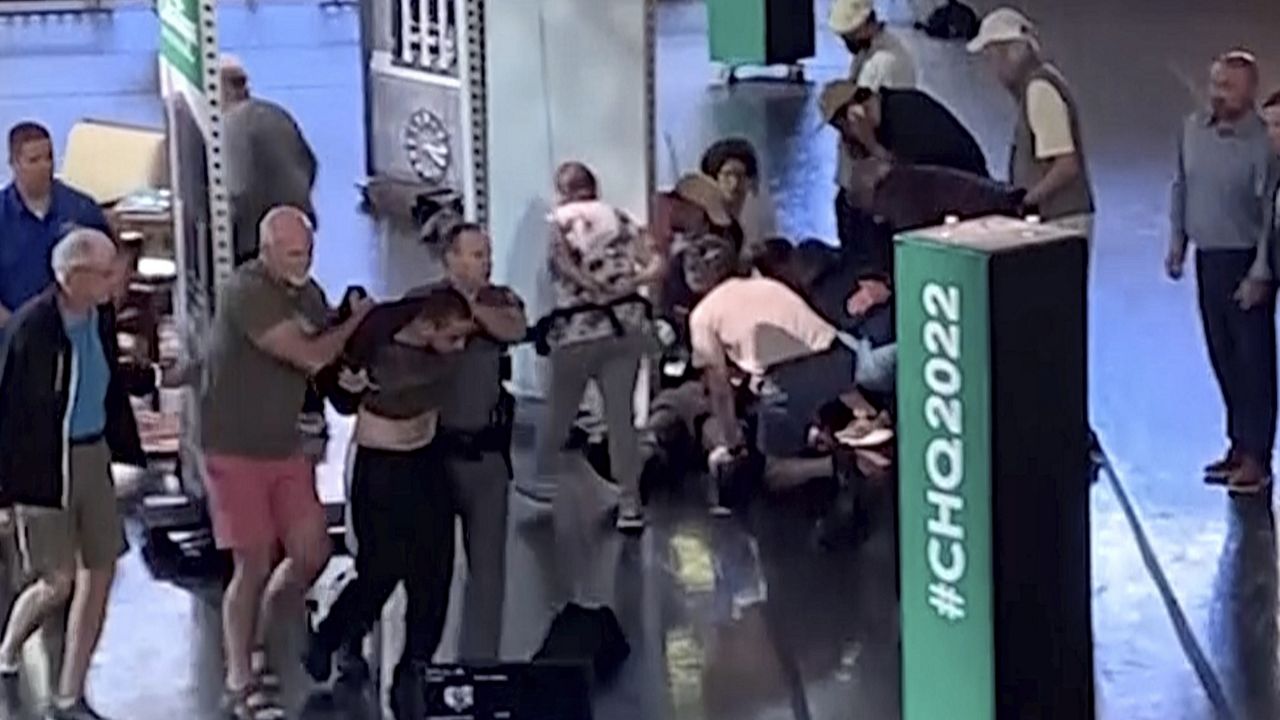 Witnesses recount attack on Rushdie: 'It just seemed so surreal'

Author Salman Rushdie, known for receiving death threats from Iran's leader in 1989, was attacked and stabbed in the neck during a lecture at the institute in Western New York.

Rushdie was flown to a nearby trauma center to undergo surgery.

State Police took a suspect into custody. They identified him as Hadi Matar, 24, of Fairview N.J., but were waiting on charges as the investigation unfolded. Officials said Matar had a pass that allowed him to access the grounds.

"Before anybody could speak, somebody jumped up on the stage from the left side and started attacking him with both hands," Klotz said.

Another witness, Art Fritzson, said, "It just seemed so surreal, like it couldn't be happening."

Rushdie was set to take part in a discussion on writers and artists in exile seeking asylum in the United States. State police said they are still working to determine a motive for the attack.

They believe Matar was working alone, but haven't ruled anything out.

Dr. Martin Haskell, a physician who was among those who rushed to help, described Rushdie’s wounds as “serious but recoverable.”

Also wounded in the attack was an interviewer who received a minor facial injury, troopers said.

People in the crowd were able to subdue the suspect before a trooper took him into custody.

"It's very early," State Police Troop Commander Major Eugene J. Staniszewski said in a Friday evening news conference. "We don't have any indication of a motive at this time, but we're working with the FBI, the sheriff's office and we will determine what the cause of this was, or what the motive of this attack was."

Rushdie's 1988 book, "The Satanic Verses," was banned in Iran and viewed as blasphemous by many Muslims, who viewed a character in it as an insult to the Prophet Mohammad.

Iran's leader at the time issued a fatwa, a $3 million bounty for anyone who killed Rushdie. Iran's current leader has not issued a fatwa to withdraw the edict, but the country hasn't focused on the writer in recent years.

"Mr. Rushdie's been living under a fatwah for 43 years now, so there's still a $3 million bounty for the person who kills him," Fritzson said. "That's incentive enough, I think."

State Police said they were not aware of any threats being made ahead of the event.

The Chautauqua Institution, located about 55 miles southwest of Buffalo, is known for its summertime lecture series and as a place for reflection and spiritual guidance. Visitors need a pass to enter, and don't go through metal detectors security checks.

"I've been coming here 25 years, and I've never felt that safety was a concern," Klotz said. "Obviously, I'm not so sure I would feel that way now."

Michael Hill, president of the Chautauqua Institution, said Chautauqua has always been an extremely safe place, "and we will be working to keep that tradition going."