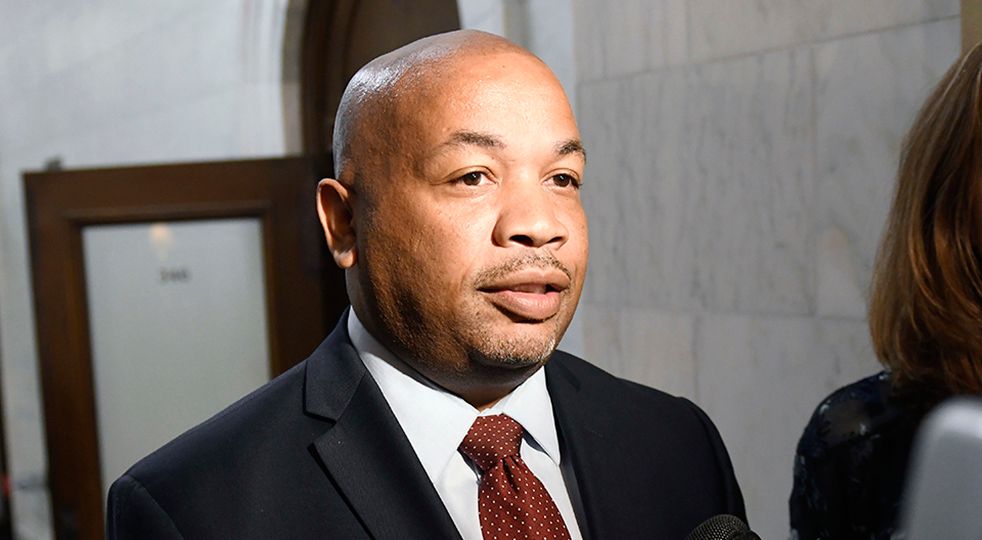 The back and forth on bail reform reached another crescendo on Wednesday when New York City Mayor Eric Adams held a press conference about crime in New York City, citing NYPD statistics backing up his position that bail reform has led to an increase in crime.

The press conference was a postscript to comments made by Adams last week in which he said he had a “great, great conversation” with Heastie about rolling back bail reform. Adams said the speaker had “agreed to review NYPD data for repeated offenders on bail-eligible, non-bail-eligible crime.”

But according to Heastie, Adams never sent the data.

When asked about his conversation with the mayor by Capital Tonight, the speaker said the upshot was that the city had the power to change rules around detention in certain circumstances.

“The conversations that he and I had initially started in his last press conference, when he mentioned about the incident between the young man and the police officer and we talked about the root of those crimes,” Heastie recalled. “I reminded him that both of those crimes were bail-eligible. And that, in fact, his corporation counsel and his probation department could work on detention if that is what they deemed was necessary. So, (the conversation) was really about what does the law allow in regards to dealing these type of circumstances.”

According to Heastie, his last interaction with Adams took place after Newsday published an article citing crime statistics out from the Office of Court Administration and the Department of Criminal Justice Services.

“We (Heastie and Adams) were excited that recidivism was not as high as it’s been made to seem. In fact… a small percentage of people were being rearrested, comparable to the rates before bail reform. So I said to the mayor, ‘you should reach out to DCJS and talk about why your numbers are different,’” Heastie said.

One of the statistics from OCA and DCJS indicates that judges are setting bail in fewer than half the cases in which bail was clearly an option. In response, Hochul said Wednesday that judges may need “continuing education” on bail reform.

“If there’s confusion that people don’t understand, I’m sure there’s continuing education programs that are out there, we can give more briefings to people, I’m happy to have our policy team work with you,” Hochul said.

When asked if he thinks judges need additional training, Heastie commented on what he believes to be the inconsistent view of judicial discretion.

“If judges.. are not asking for bail and they are releasing people on their own recognizance, you know, that’s the judge’s determination. But then, the counterargument comes back to me, ‘Too many people are getting out, therefore you should give judges discretion.’ I’m like, ‘Judges already have discretion.’ It’s almost like a catch-22. And I just think, Susan, honestly, we’re in a time when crime is up all over the country and one crime is one too many, but those who want to blame bail reform, then why is crime up in California and Texas and Michigan and everywhere else,” Heastie said.

The speaker commented that he’s disappointed the public conversation around bail has focused on crime rather than on how reforming the system has saved the state hundreds of millions of dollars by not incarcerating people.

“Everyone now, if you’re arrested for a second crime, you are now bail eligible. So, in some ways, it boggles my mind that we keep hearing stories about people being let out 12 and 13 times. I just don’t understand how that can be. But if that is the case, there are places within the system and within the current law that allows for those things to be dealt with,” Heastie said.

Politically speaking, Adams’ stance on bail could appear counterproductive to his fellow Democrats, considering Hochul is running for election against a Republican who has cited Adams as an ally on this issue.

When asked for his opinion, Heastie said that on almost every other issue he and the Mayor are in agreement.

“Being the mayor of the city of New York is a tough job. I believe that that is, ultimately, what is the Mayor’s top priority,” Heastie said. “I don’t believe that the Mayor is being disingenuous. I think he legitimately cares about reducing crime in the city, and we may disagree on this one avenue around bail.”

Heastie specifically commented that he and Adams are in lockstep on the issue of guns.

“The fact (is), there are way too many guns coming into this country. I would love for the Republicans talk about the fact that this country is only 4% of the world’s population yet we have 67% of the world’s civilian-held guns. Every illegal gun started out legal somewhere. I would love Congressman Zeldin and other Republicans to help us talk about that,” Heastie said.