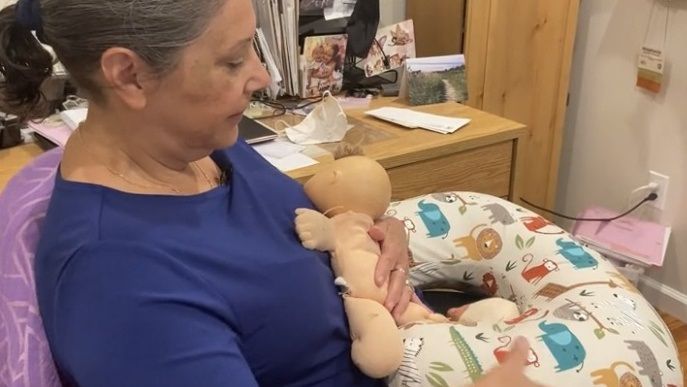 With long delays and cancellations, being at the airport can be stressful enough. It can get a lot more uncomfortable if you’re a nursing mom.

“Moms need to release milk from their breasts every few hours or they run the risk of getting mastitis or a clog or infections, or just being really uncomfortable, so having a safe place to be able to pump every couple of hours when you're in those airports for a long time is very important," said Stephanie Sosnowski a certified lactation consultant.

New parents will soon find nursing-friendly pods or facilities in airports throughout New York behind the security-screening area where they can safely breastfeed, pump or chestfeed.

Sosnowski is a board-certified lactation consultant and founding member of the New York Statewide Breastfeeding Coalition (NYSBC). She coaches new moms on how to breastfeed.

“Babies are born instinctually knowing how to breastfeed, but to have moms be comfortable with it and understand how their bodies work is really the challenge,” said Sosnowski.

For years, the NYSBC has been fighting for nursing facilities in airports and other public places around the state, so the new requirement is a real win.

“This legislation really speaks to the fact that the airports need to make a concerted effort to help moms who are breastfeeding, to provide them with some privacy, if that makes them feel better," said Sosnowski.

Many airports throughout New York already have nursing centers or nursing pods like the Mamava pod.

“The mama pods provide a sink, they provide electricity, a place for a mom to come in sit down. There's actually a place for if she has a toddler with her," said Sosnowski.

In June, the American Academy of Pediatrics expanded their guidelines to recommend moms breastfeed for two years. Sosnowksi said the new law helps make breastfeeding a lot more doable for moms on the go.

“I think it's just one more level of support for moms," she said. "We have moms who are really challenged. They have to go back to work. They have six or eight weeks off from work if they're traveling for work. This will make it a little easier for them.”

World Breastfeeding Week is the first week of August. Garnet Health Medical Center will celebrate it at their annual event "Latch On in the Garden." For information, go to its website.