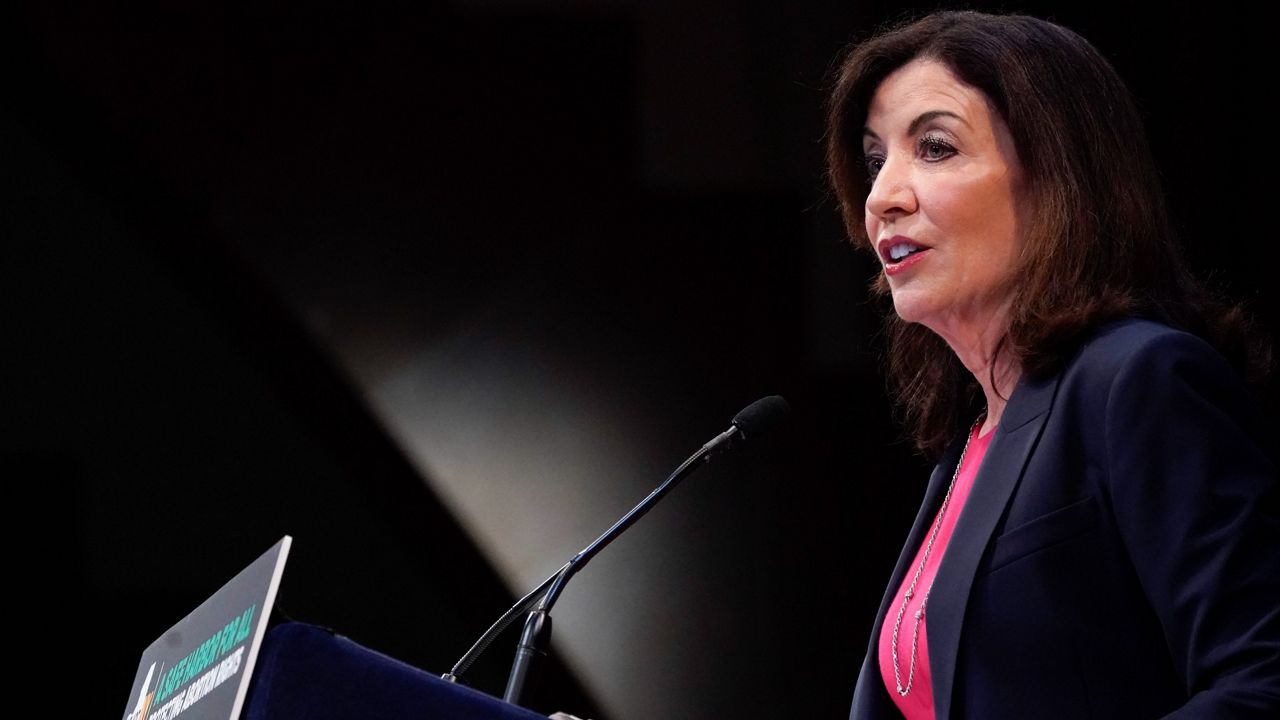 Gov. Kathy Hochul on Thursday called the Supreme Court’s decision to strike down a New York law making it harder to obtain a concealed carry license “absolutely shocking” — and said her administration was prepared to push for new restrictions to circumvent the ruling.

Speaking at a news conference moments after the court handed down its 6-3 ruling, Hochul said she had “just received some very disturbing news from Washington.”

“Does everyone understand what a concealed weapon means? That you have no forewarning. That someone can hide a weapon on them and go into our subways, go into our grocery stores, like stores up in Buffalo, New York, where I’m from. Go into a school in Parkland or Uvalde,” she said. “This could place millions of New Yorkers in harm’s way.”

“As governor of the state of New York, my number one priority is to keep New Yorkers safe, but today the Supreme Court is sending us backwards in our efforts to protect families and prevent gun violence,” she added. “And it’s particularly painful that this came down at this moment, when we are still dealing with families in pain from mass shootings that have occurred, the loss of life, their beloved children and grandchildren.”

"We are not powerless in this situation," says @GovKathyHochul. "We're not going to cede our rights that easily."

She vowed New York will enact new gun regulations after the Supreme Court struck down a state law requiring "proper cause" for a concealed carry license. pic.twitter.com/FyOvVttD1G

Hochul’s administration has been working with legal experts to find a way to impose new restrictions that fit within the parameters of the ruling, she said.

“I’m prepared to call the Legislature back into session to deal with this,” she said. “We’ve been in contact with leadership — we’re just looking at dates — but I will say, we are not powerless in this situation. We’re not going to cede our rights that easily, despite the best efforts of the politicized Supreme Court of the United States of America.”

When the Constitution was ratified, Hochul noted, “the only weapons at the time were muskets.”

“I don’t think they envisioned the high capacity assault weapon magazines intended for battlefields as being covered, but I guess we’re just going to have to disagree,” she said.

“This decision isn’t just reckless, it’s reprehensible,” she added. “It’s not what New Yorkers want, and we should have the right of determination of what we want to do in terms of our gun laws in our state.”

At his own news briefing Thursday afternoon, New York City Mayor Eric Adams said he was “hoping that the governor immediately calls lawmakers back to Albany.”

We have been preparing for this decision and will continue to do everything possible to work with our federal, state, and local partners to protect our city. https://t.co/rLvU0gs6zi

“I have said and stated for some time now that the Supreme Court decision was keeping me up at night. It’s clearly reached the point where we won’t have any sleep,”  Adams said. “While we’re still analyzing the decision, we can say with certainty: this decision has made every single one of us less safe from gun violence.”

“We will work together to limit the risk this decision will create once it is implemented. And we cannot allow New York to become the Wild, Wild West. That is unacceptable,” he added. “We will not allow our city to live in fear that everyone around us is armed, and that any altercation could evolve into a shootout.”

Appearing with Adams at the briefing, NYPD Commissioner Keechant Sewell noted that the ruling had not yet taken effect.

“So the important thing to know today is that nothing changes. If you have a premise permit, it does not automatically convert to a carry permit,” she said. “If you carry a gun illegally in New York City, you will be arrested.”

In a statement, state Senate Majority Leader Andrea Stewart-Cousins said the “Supreme Court today decided that guns are more important than lives in this country.”

“Today’s decision reinforces the fact that states must step up to protect our citizens’ best interests and lead the way on necessary reform,” she wrote. “New York will rise up to this latest challenge to pass additional gun safety legislation.”

Sen. Kirsten Gillibrand, meanwhile, called the court’s decision “a recipe for disaster” during a press call.

“It is not just irresponsible, but it’s downright dangerous,” she said. “Our nation is in the middle of a gun violence epidemic, and instead of working to protect our communities, this court has made it even easier for potentially dangerous people to carry concealed handguns in public spaces.”

“We need to act, and we need to act now,” she added. “Congress must move swiftly to pass comprehensive gun safety legislation, and ensure only those who are trained and trustworthy are allowed to carry loaded firearms.”

And in a tweet, New York Attorney General Letitia James said her office was “currently reviewing the decision from the Supreme Court on New York’s ability to regulate who can carry firearms in public.”

We are currently reviewing the decision from the Supreme Court on New York's ability to regulate who can carry firearms in public.

But we will continue to do everything in our power to protect New Yorkers from gun violence and preserve our state's common sense gun laws.

“But we will continue to do everything in our power to protect New Yorkers from gun violence and preserve our state’s common sense gun laws,” James wrote.

Initial reactions to the ruling from several New York Republican lawmakers diverged from those of their Democratic counterparts, with Long Island Rep. Lee Zeldin, the frontrunner in the state’s Republican gubernatorial primary race, calling the decision “historic breaking news.”

Kathy Hochul, the former A-rated NRA Member of Congress, better not make her next move on this another assault on law-abiding NYers. If she does, it will make it even more likely I take her job Nov. 8. NYers need a Governor who defends freedom, liberty & the Constitution. https://t.co/i6wQis7ZuL

“The US Supreme Court just STRUCK DOWN NY’s unconstitutional concealed carry law! I was proud to sign on to the amicus brief in support of [the New York State Rifle and Pistol Association] & in defense of Constitutional rights of law-abiding NYers who have long been attacked. Shall not be infringed!” Zeldin tweeted.

Rep. Elise Stefanik on the ruling calls it a victory for gun rights pic.twitter.com/vxWBB69K79

“While the Far-Left continues to push unconstitutional gun control measures as New York’s failed bail reform policies have made our communities more unsafe, this ruling comes at a crucial time,” Stefanik said. “Now, law-abiding gun owners in New York State and across the nation can again exercise their Constitutional right to concealed carry to protect themselves and their families.”

Rep. Claudia Tenney also backed the decision, saying in a statement that it “reaffirms and strengthens our Second Amendment rights.”

“As the defund the police movement goes mainstream in the Democrat Party and failed progressive policies like bail reform make our streets less safe, it is more important than ever to ensure law-abiding Americans can properly defend themselves inside and out of their homes,” Tenney wrote. “This vital issue was at the core of today’s ruling.”

Lawmakers weigh in on gun ruling