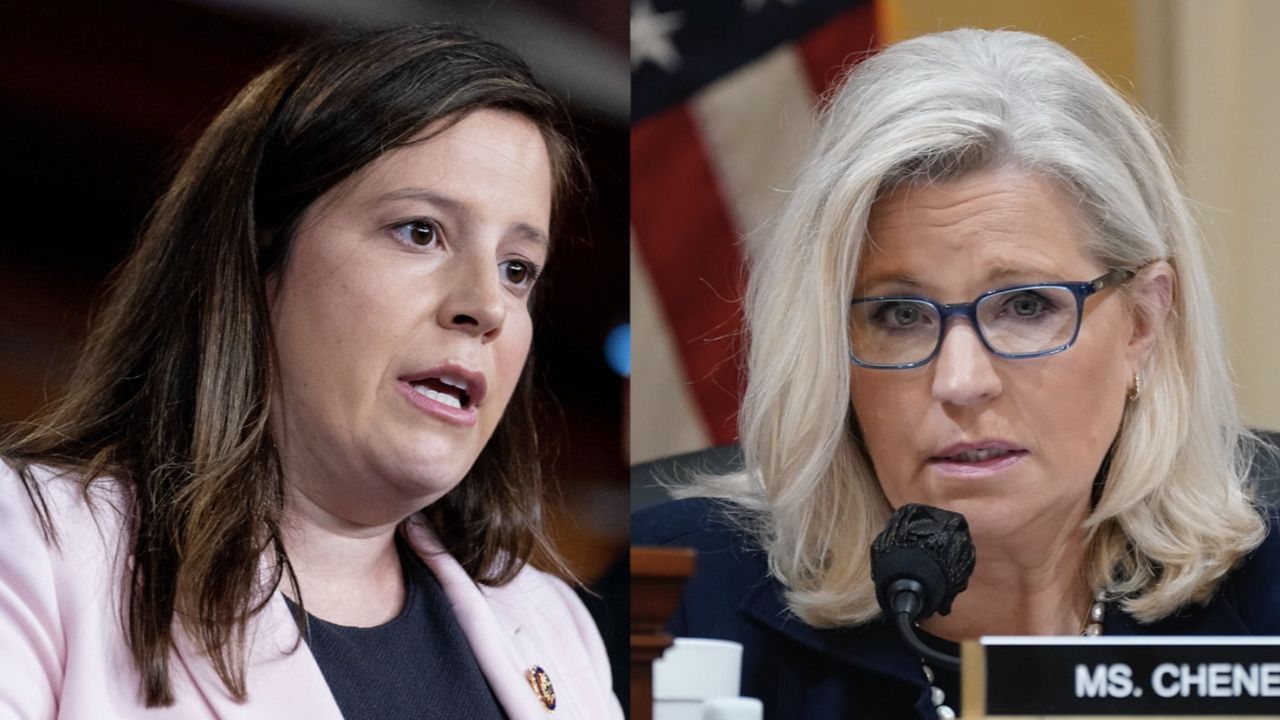 As Rep. Liz Cheney has entered the spotlight in her leading role on the Jan. 6 Committee, the woman who replaced her as the third-ranking House Republican — Rep. Elise Stefanik of Upstate New York — has played a leading role attacking the panel’s investigation.

The two prominent Republican congresswomen were not always fiercely at odds, but their split in recent years underscores the divisions in the Republican Party and the nation’s politics.

Stefanik, a fierce ally of Donald Trump, currently serves as the House GOP Conference chair. She replaced Cheney in that role last year. As the committee’s hearings got underway this past week, Stefanik launched her own counter-programing, appearing repeatedly on conservative TV and radio outlets.

In an interview on Fox Business, Stefanik called the Jan. 6 hearings “a political circus.” She told Sean Hannity on his Fox News show the investigation “will do nothing to ensure that the Capitol is more secure in the future.”

“This is a partisan political witch hunt,” she said on Newsmax.

The Jan. 6 committee does include two Republicans. One of them, ironically enough, is Cheney.

As recently as 2019, Stefanik praised Cheney as a “huge asset” as House GOP Conference chair. But since the 2020 election, the two have taken dramatically different paths.

Cheney became one of former President Trump’s most outspoken Republican critics, voting to impeach him following the Jan. 6 attack, contributing to her fall from GOP leadership.

She has not backed down in her criticism of Trump since.

“To my Republican colleagues who are defending the indefensible: There will come a day when Donald Trump is gone. But your dishonor will remain,” Cheney said at least week’s Jan. 6 hearing.

Long Island Democratic Rep. Kathleen Rice, who joined Congress at the same time as Stefanik, said in an interview that she no longer recognizes the lawmaker whom she says once showed a willingness to reach across the aisle.

Stefanik “has turned into a mouthpiece for Donald Trump. I've never seen an evolution quite like that. So I don't know how to explain it. I don't know what happened,” Rice said. “Some people would point to just rank, personal and professional ambition. I don't know,” she continued.

.@RepKathleenRice, a Dem who joined Congress at the same time as Elise Stefanik, says she doesn't recognize the Stefanik of 2022.

"She has turned into a mouthpiece for Donald Trump. I've never seen an evolution quite like that."

Former Republican Rep. Tom Reed called the Cheney-Stefanik split a sign of the times within the GOP.

“You obviously have a strong voice in the Trump influence, the MAGA influence of the party. But then you also have folks that are voting their conscience,” he said.

Spectrum News NY1 did reach out to Stefanik for an interview about the Jan. 6 investigation. Her team did not make her available.

This is not Stefanik’s first time going to bat for the former president. She was outspoken in defending him during the first impeachment trial.

She also recently proudly embraced the moniker of ultra-MAGA.