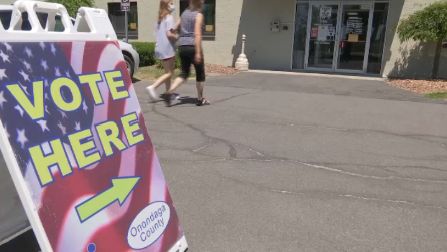 Early voting begins this Saturday for the June primary, and goes through Sunday June 26. The first of two primary elections you can vote in this summer, which is unlike most polling years.

Onondaga County will have eight polling places for early voting. This is the fourth year of early voting in New York. This Saturday people can begin casting ballots.

For early voting it does not matter where you show up to vote. Any of the eight polling places in Onondaga County will be available. Absentee ballots can be requested with the reason being the pandemic, but they must be requested in person. In the county, Republican voters will vote for who will appear on the gubernatorial ballot, and a local race in Pompey.

The second primary will be in August, with different seats and candidates to vote for. Democrat Elections Commissioner Dustin Czarny says its hard to say if the split primary this year will impact voter turnout.

“We’ve had bifurcated primaries before and its very confusing for voters. And that’s when we had years to plan for it and everybody knew in January what the races were and what races were when and now we just found out in may all of this has happened,” said Czarny.

Czarny said changing ballots for the June primary wasn’t a big hurdle. The challenge is coming up — when by July 5 they have to certify the June primary and then turn around to send out absentee ballots on July 8.

They’re looking for elections inspectors to help out with the August primary, and the November election. The Onondaga County Board of Elections will be holding classes to become an inspector in July.