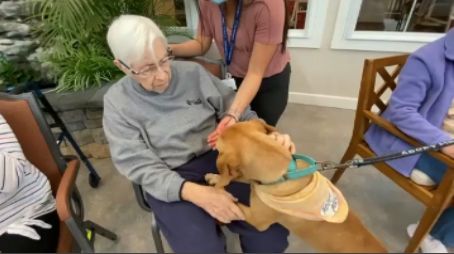 How caring for dogs is helping dementia, Alzheimer's patients improve their quality of life

Close to 18% of that growth will be right here in New York State.

Agnes Ray, 94, moved into Loretto’s Borer Memory Care Facility in January. Her dog Fritz is her sidekick, and she says she couldn’t live without him.

“He is a pleasure. And, he loves everybody in my family and I don’t know what I’d do without him,” said Ray.

Agnes, who deals with memory loss, loves dogs. With some guidance from staff she recently joined other residents in the Loretto-based facility as they got to work in the memory care facility kitchen.

The day’s mission was to bake treats for dogs in need of homes, currently staying with Helping Hounds Dog Rescue.

From mixing pumpkin and peanut butter, to flour and eggs the group was having quite a bit of fun while staying engaged, as studies show baking stimulates brain activity and can provide therapy to those with dementia.

“It brings back, not normalcy, but a lot of familiarity of when they were younger and brings back all those memories of these nice times they engaged in the kitchen and so forth,” said Borer Memory Care Facility Life Enrichment Director Shannon Loughlin.

Studies show baking stimulates brain activity and can provide therapy to those with dementia.

After mixing the ingredients, and using some doggy bone cut outs — the treats were put in the oven. Then later a few hours later the dogs were brought in for a visit.  Of course, the residents weren’t the only ones who were happy.

“It’s wonderful for the dogs.  This dog for example came in from Mississippi on Saturday as a stray, so we’ve only had the dog five days and the dog needs to be socialized, so this is a gift to be invited here,” said Helping Hounds Dog Rescue Volunteer Hetty Gingold.

This socialization quickly creates a positive environment for both the home seeking dogs and these residents. Although she has her own dog, folks like Agnes Ray always enjoy days like this.

“It felt good, it felt good. I’ve never done it before,” said Ray.

It was a unique experience for those who could surely use more bright days in the future.

According to the Bright Focus Foundation, the presence of pets can help reduce the effects of dementia, which include anxiety, agitation, irritability, depression and loneliness.

By their friendliness and non-threatening way, pets can help a dementia patient be more interactive, when sometimes they are not able to do so in social settings with other adults.​

As detailed in a 2017 article published by Alzheimer's News Today, service dogs can provide a helping hand for anyone suffering from dementia. They can be taught hundreds of small tasks that can really make a big difference to dementia and Alzheimer’s disease patients, giving them back some autonomy, allowing them to get more out of life and taking some of the burden from caregivers.

According to Alzlive.com, the training to become a dementia support dog is no easy feat and requires young dogs to have a certain type of temperament. Service dogs tend to be one of a few breeds: labradors, golden retrievers, German shepherds, or collies.