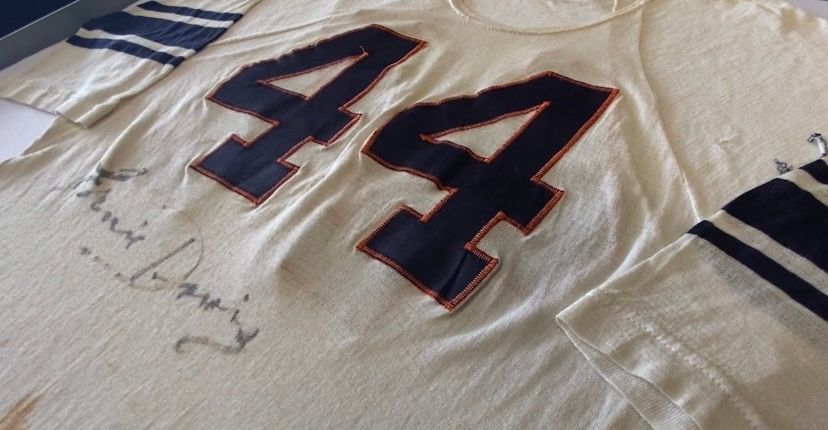 Legacy of #44 at Syracuse University spans decades of sports history

The number 44 is a legacy for Syracuse University. It can be found in the university's phone number, zip code and on the jerseys of three SU football legends: Jim Brown, Floyd Little and of course, Ernie Davis.

"And that's why the number 44, because of Brown, Davis, and Lloyd, is so sacred on campus," said Meg Mason, a Syracuse University archivist.

Last December marked 60 years since Ernie Davis made history by becoming the first Black athlete to win the Heisman Trophy.

To say SU is proud of Davis is an understatement. Besides "Ernie Davis Hall" and his campus statue, Mason showed other parts of the Ernie Davis collection from the university's archives, including a jersey Davis wore and signed.

"This is the program football program from the Cotton Bowl, which is the championship game. The cover is wonderful. And there's also appears in in the actual roster in the program, as well as in various photos," said Mason.

Davis winning the Heisman Trophy was not only a significant sports moment, but American history moment.

According to author and sports columnist Scott Pitoniak, Jim Brown, the "OG Number 44," who predated Davis at SU, was passed up the trophy because of race.

"Jim Brown was Black and followed voters for the Heisman Trophy were white. And this was a time in America in the mid-50s, where such things were not going to be tolerated or accepted, sadly. So Ernie winning the Heisman was really a breakthrough moment," said Pitoniak.

Davis's 1961 Heisman Trophy win ultimately opened the door and inspired other young, Black athletes, such as Floyd Little. Little became a three-time All-American at Syracuse and a Denver Broncos running back.

"Every time I played I knew who I was representing not only Syracuse University, but Ernie Davis and Jim Brown," said Little in a previous interview about his hero, Ernie Davis.

After Syracuse, Ernie Davis was the first pick in the 1962 NFL Draft.

He was set to play for the Cleveland Browns, but his life and dreams were tragically cut short. In 1963, Davis died of Leukemia at 23 years old.

Davis originated in the Elmira area, where he is still remembered today. Elmira Free Academy is now called Ernie Davis Academy and a community park, recently revamped in 2020, is also named in his honor.

"I think the fact that his legacy lives on you know, all these years later, 67 years later, or half a century later. It speaks speaks volumes of the man," said Pitoniak.

Syracuse University officially retired jersey #44 in 2005. Number 45 was Davis' jersey with the Cleveland Browns. Although he did not get the chance to play, the Browns retired his number soon after Davis' passing.