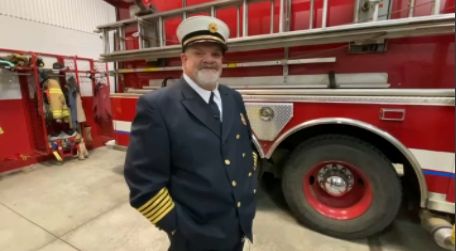 As he sits down to film a recruitment video, Tony Silvestri is hoping to address a very real issue impacting fire departments nationwide.

Along with fellow Union Center firefighter Kevin McManus Jr., the two are hoping this recruitment video goes a long way in addressing that need. For Assistant Chief Silvestri, his service to the community starters nearly 42 years ago when he first became a firefighter.

From his very first call in the early 80’s, he hasn’t looked back, but after a storied career, he’s putting away his gear for the final time.

“The only goal that I really had was to help the community out and a lot of people get confused with that, but that’s what we’re here for. We’re here for community support and that’s why I always did it,” said Silvestri.

And firefighting looked much different when Silvestri first started over 40 years ago, especially the trucks that he once drove which all operated on standard transmission.

“After about three of four drive shafts that got twisted, we decided that we’re probably going to have to start buying automatic-driven engines because nobody drove standard back then and there was only three or four of us who drove the truck,” said Silvestri.

Over the years, Silvestri has seen just about everything, and there are plenty of calls that have left an impact on him. He says when his crew leaves a difficult call, it’s a band of brotherhood that gets them through it.

“I’ve spent more time here than I did at home...and just understand, what we talk about in the fire house kind of stays in the fire house, and the reason I’m saying that is because we go to some really bad calls, and we talk about them, and that’s just the way we do that for curing ourselves,” said Silvestri.

Fast-forward to today, and Silvestri hopes to see the next generation carrying on those traditions and that starts with firefighters like McManus.

“Chief Silvestri has always been really, really good to work for. He’s been a fantastic chief, a fantastic leader. He’s the kind of guy who you want to command. He’s very knowledgeable, but also in terms of leading, he’s a very, very good leader,” said McManus Jr.

Silvestri says the fire company has a variety of jobs that don’t involve tackling fires, with everything from administrative positions to office work.